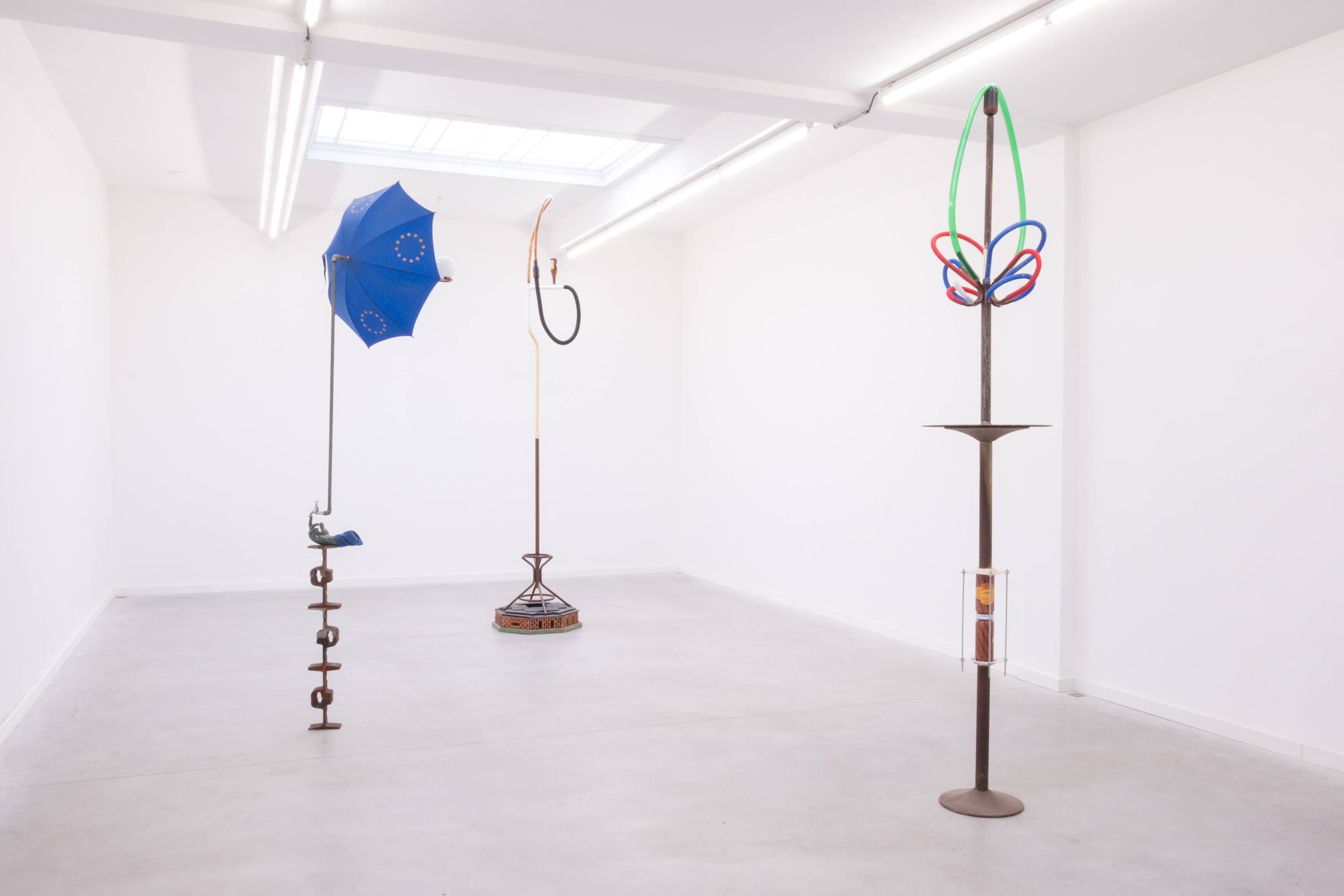 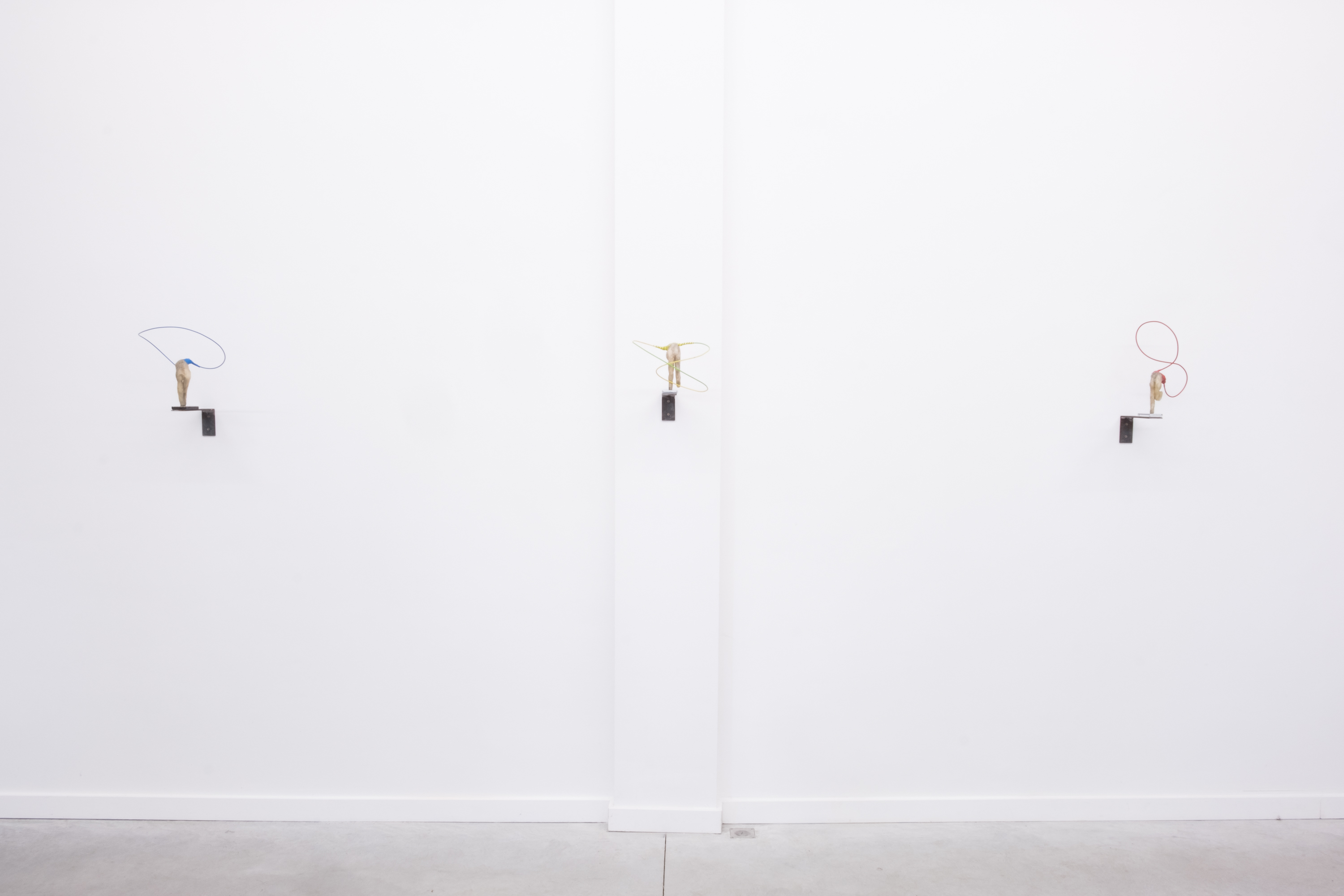 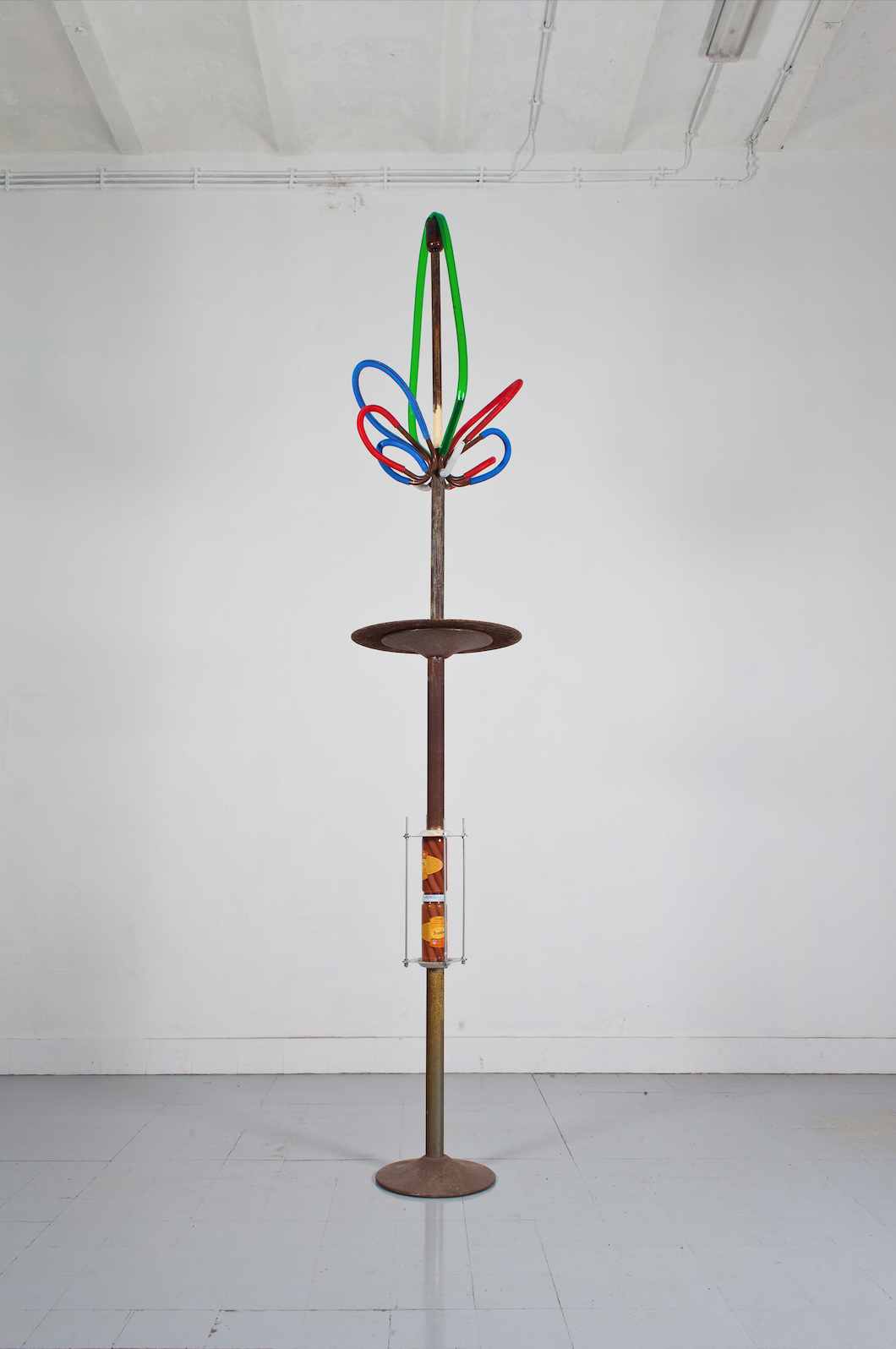 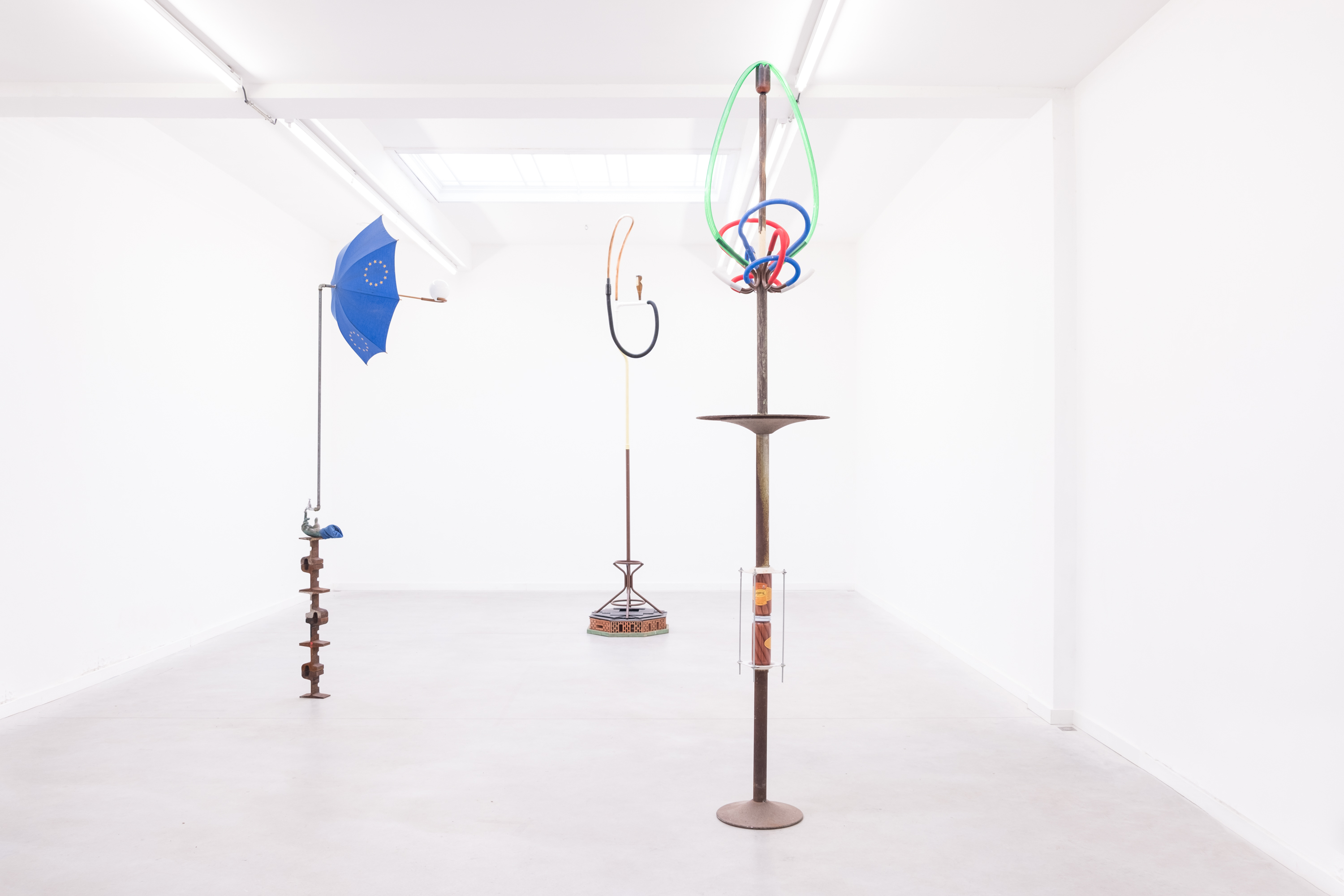 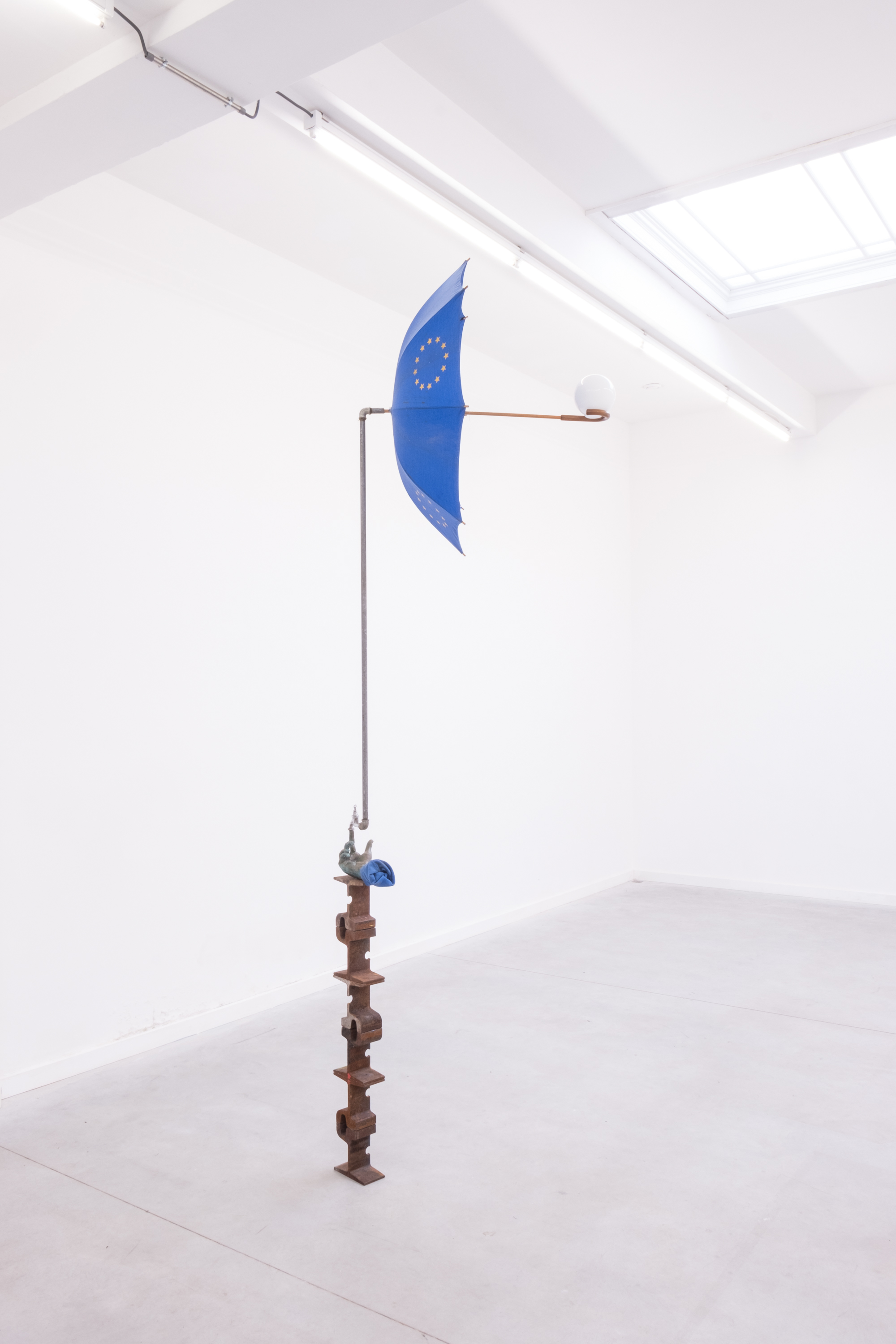 On the occasion of Antwerp Art Weekend 2018, PLUS-ONE Gallery (Berchem) shows a solo presentation by Kasper De Vos. In 'The Dance for Mobile Reception', the artist takes us inside and around sculptures. He usually works with found materials, and especially previously disposed of objects. He transforms them into new modules, all the while respecting the energy of their previous existence and purpose.

The title 'The Dance for Mobile Reception' is a fulfilled promise: 'dance' is probably the clearest common thread throughout the works. There is an inherent movement in multiple materials, such as old train tracks, but especially the wax fingers on mobile phone screens are shaped elegantly like a line drawing, forming a dance on paper. They gracefully represent everyone's daily finger dance on touchscreens, and, in doing so, form the link to the title's second part, 'mobile reception'.

Main characters of the show are three 'antennas': extremely vertical assemblage sculptures, puzzled together from mostly found objects. They are delicately balanced piles of objects, freed of their previous purposes, with on top... an umbrella, or a carefully positioned dance of plastic tubes, opening up towards the daylight, like a flower would. De Vos sees the flower as a metaphor for his thought process, which consists for a great part in waiting for the sculptures to grow slowly and streadily. Fed by time and coincidence, the pieces will, eventually, find each other and make the exact right connection.
At the same time, they are antennas, stretching out towards the sky like an elegant dancer, hoping to receive an invisible signal.

An almost Brancusian pedestal, a realistically sculpted hand, carrying a water tap from which 'streams' an umbrella with the European flag. In this presentation, Kasper De Vos makes a bridge between different domains of his practice. Especially the 'antennas' combine his modelling craft, his assemblages and the lines of more conventional drawings.

Kasper De Vos (°1988, Ghent, Belgium) lives and works in Ghent. His works were previously included in the acclaimed exhibition 'Ecce Homo' in Antwerp, and in 'Lust Laughter Liquor', PLUS-ONE's group exhibition in collaboration with Gallery Sofie Van de Velde. His first solo exhibition in The Netherlands, entitled 'A Rolling Stone Gathers No Moss', is on view until June 3rd at De Brakke Grond. His solo exhibition at Emergent will open in October.