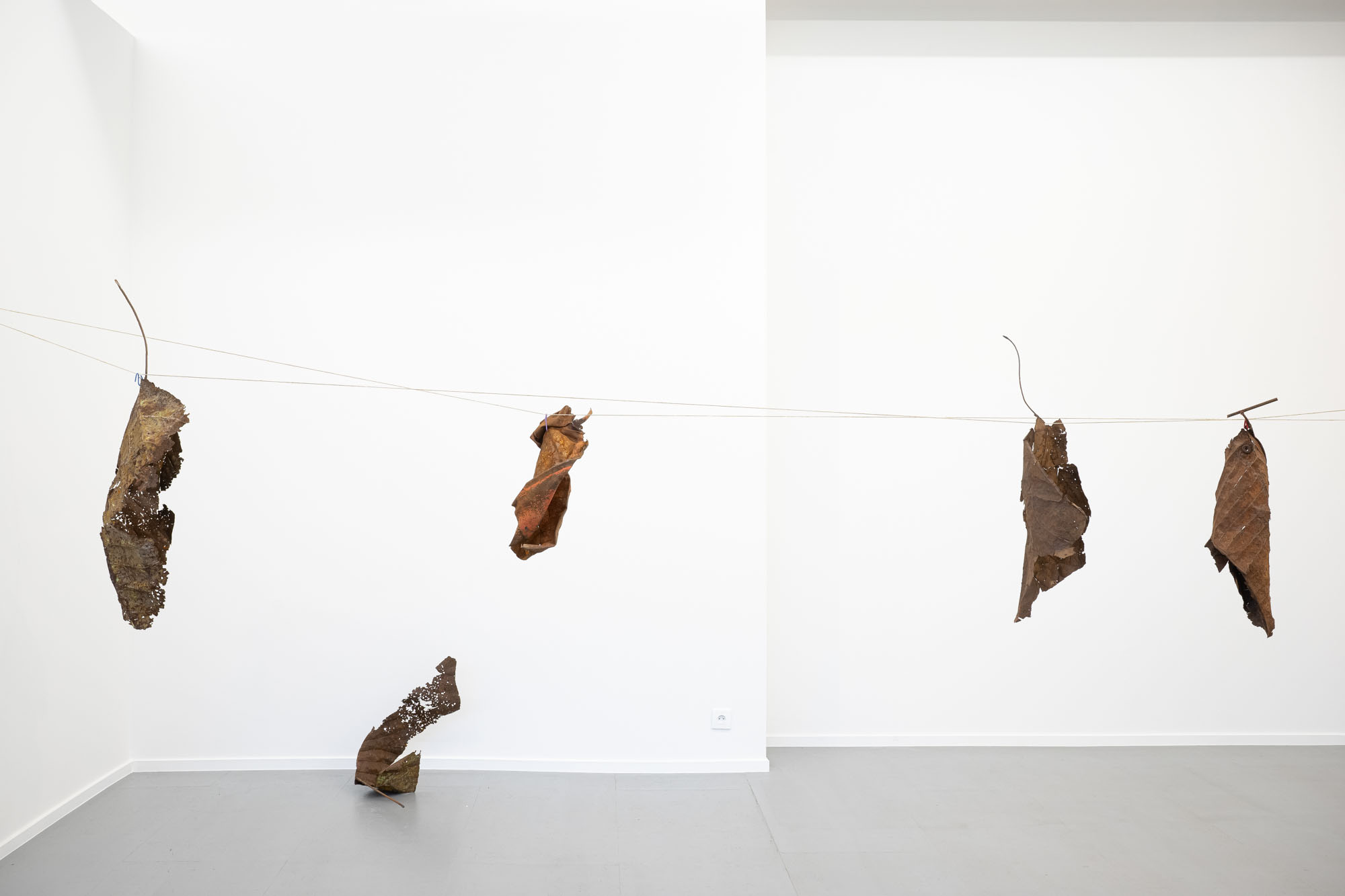 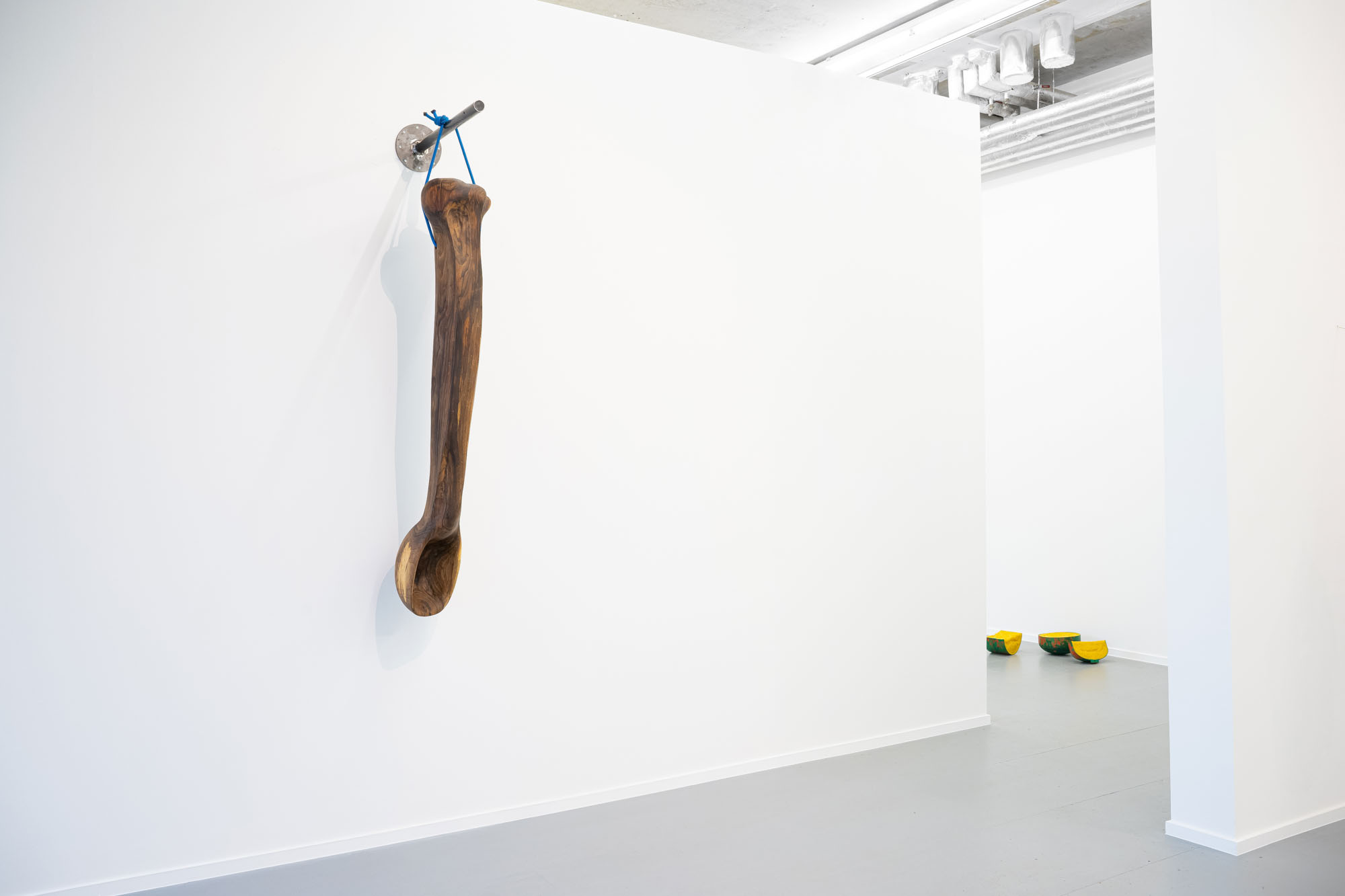 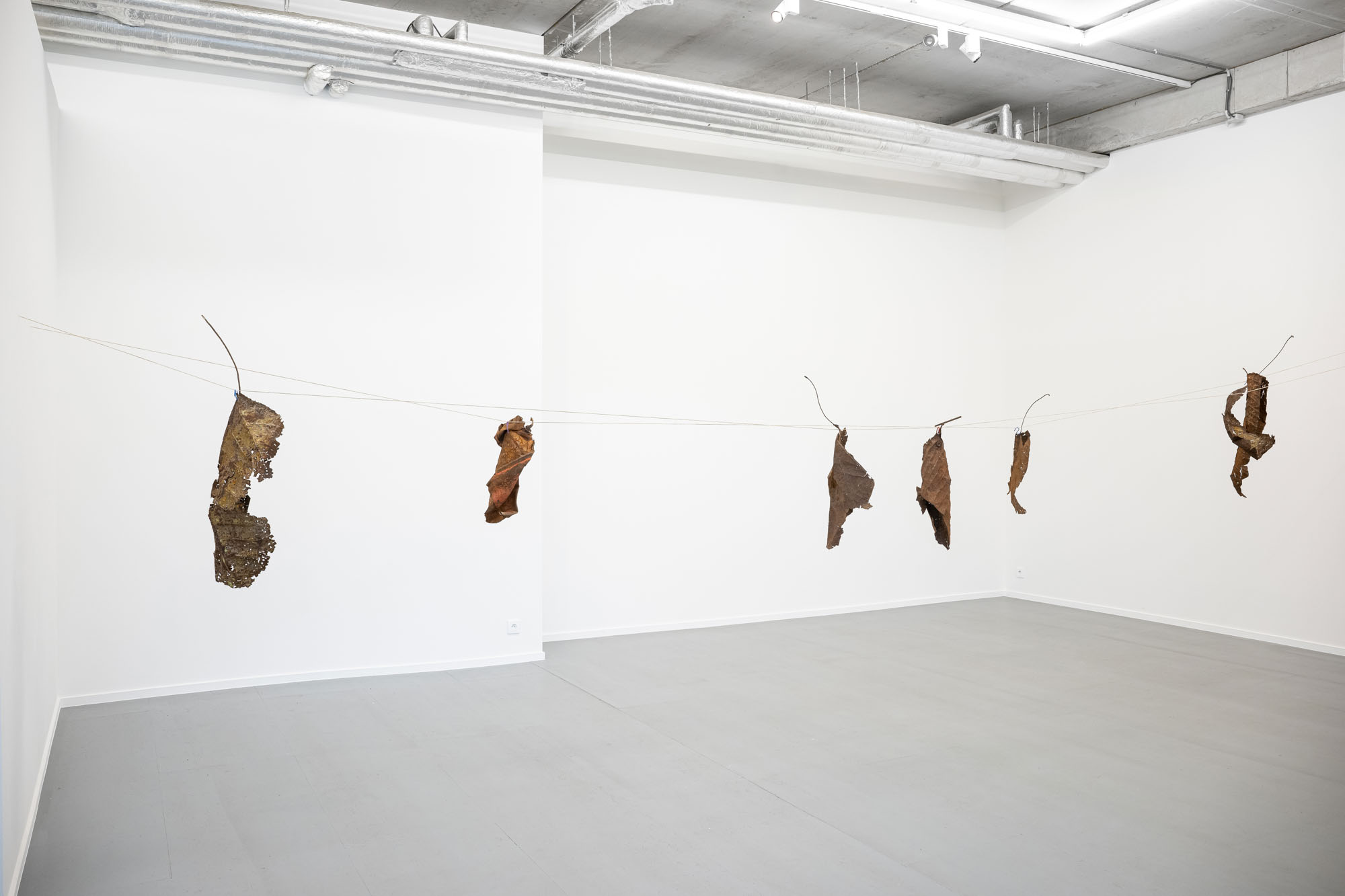 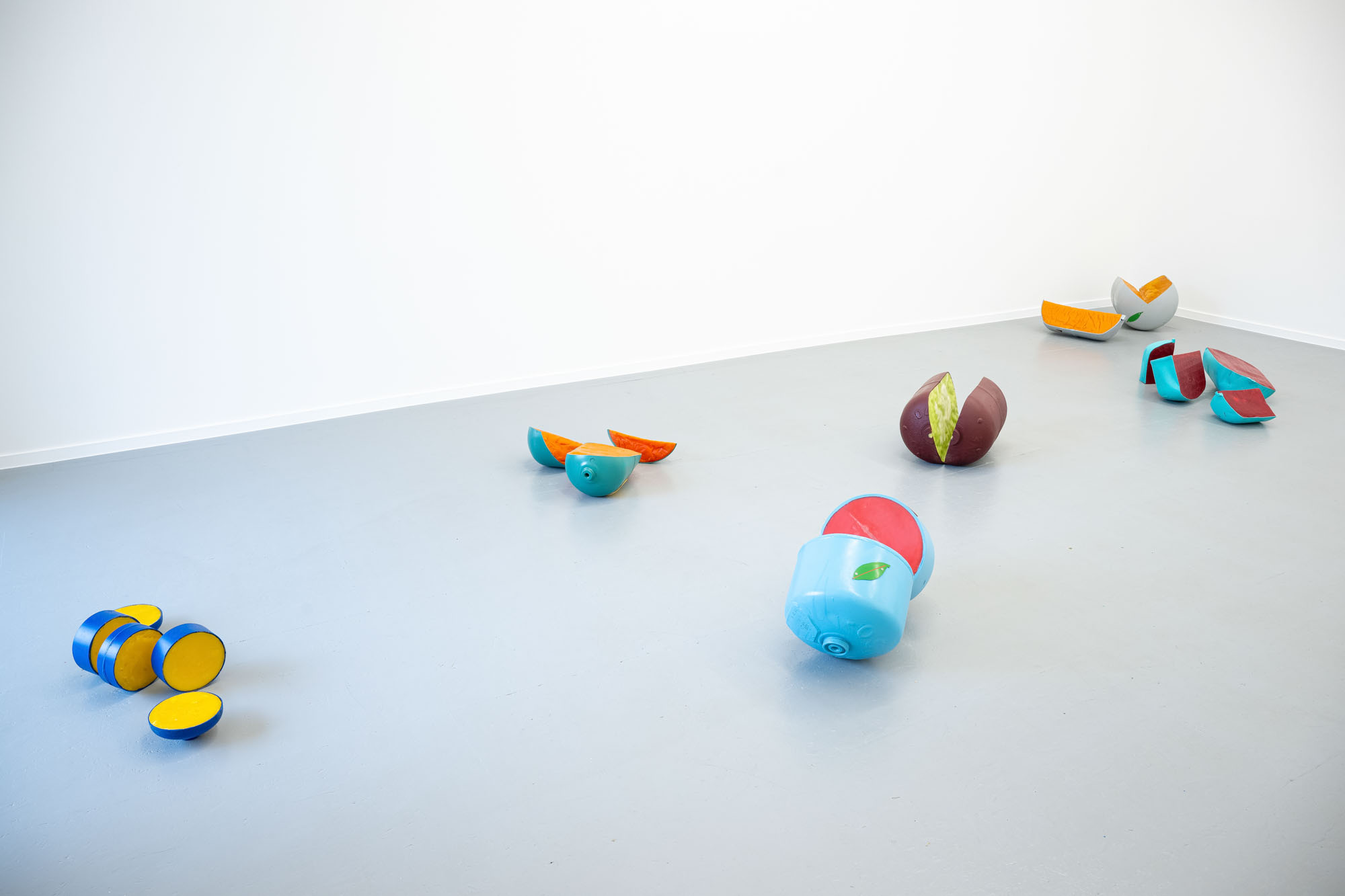 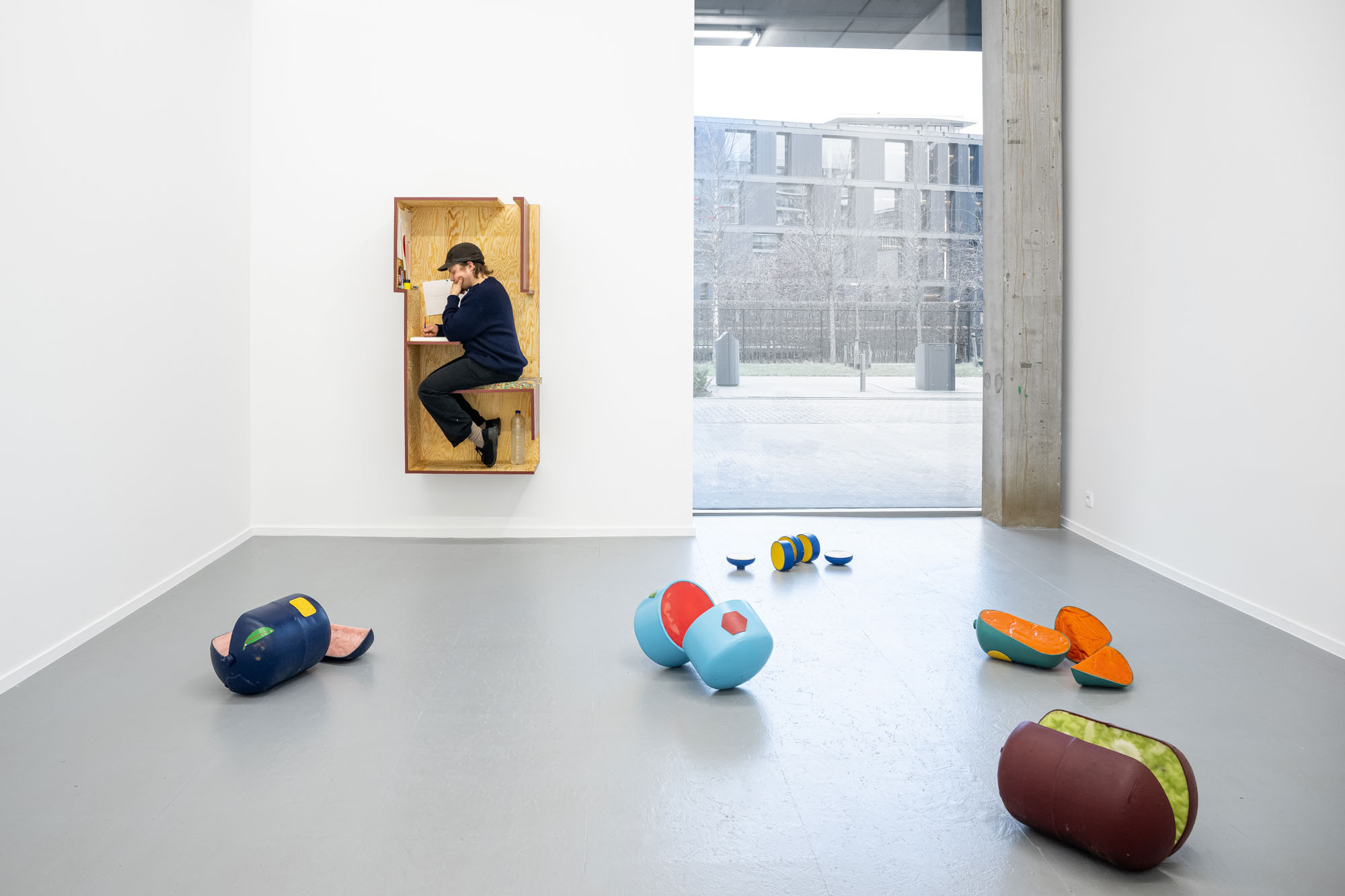 The invitation card for Kasper De Vos's solo exhibition shows the artist curled up in the model of the PLUS-ONE Gallery. This image of the sleeping artist becomes a metaphor for the slumbering artist, perhaps immersed in a dream, in another temporality. This picture is not insignificant because, for his third solo exhibition at the gallery, the artist wants to take us "to the other side of slumber (sluimertijd)". This quote, which the artist chose as the title for his exhibition, and which is an extract from a poem by Marieke Lucas Rijneveld, from their volume Komijnsplitsers, perfectly reflects his experience of the creative process. "Many of my works situate themselves in a kind of confusing situation between dream and reality (slumber time)" he explains.

In this slumber time, his imagination intuitively, as in a game, juxtaposes several elements and connects them in a story. Then, during that creative process, that intuitive thinking, reflection and the act of sculpting come together. The results are amazing works and environments that are not devoid of humour. Sometimes they are oversized foods and objects, sometimes diverted materials and objects, and sometimes formal collages with surreal elements that surprise the observer.
After marvelling and smiling, the viewer becomes aware that these works lead to a critical reading of our consumer society that produces tonnes of waste. Therefore, many of the sculptures consist of discarded objects. Kasper De Vos transforms them and gives them a second life in a jubilant and expressive universe tinged with poetry.

Like Alice in Wonderland, the viewer is magically catapulted into a world where objects are denatured and transformed. This "switch" plunges them into a game of visual associations.
The model of the gallery became a bas-relief/desk, rusty metal barrels were turned into giant autumn-coloured leaves, gas cylinders have been transformed into giant fruits, and a sculpted tree trunk into a giant spoon with a handle that looks like a bone.

All this formal and conceptual contamination evokes surrealism, pop art and new realism. Without pedantry, with great lightness and sincerity, Kasper De Vos refers to René Magritte and Marcel Broodthaers, his two world-famous Belgian congeners. He is fascinated by Magritte's formal universe, many images of which he has collected on the mood board in his studio. The imaginary and timeless immediacy of the surrealist's disturbing strangeness, which still influences the world of advertising, does not fail to inspire him.
The term "sluimer", which by extension gave the exhibition its title, also evokes "sluimererwt". The word "sluim" means "peel" in Old Dutch. This is not an insignificant observation, for on closer inspection the all-encompassing forms, like the “mussels” of Marcel Broodthaers, are omnipresent in De Vos' sculptural work. Both the model/room and the cylinders/fruits are examples of this. This container (de schil) also symbolises the mould in which an idea or an object can be born and grow in significance. As with Broodthaers, the artwork is no longer sacred, it is an instantaneous emanation of thought and daily life.

Some of the oversized sculptures are reminiscent at first glance of the giant fabric sculptures by the American artist Claes Oldenburg. The works of Kasper De Vos are different in that the change in scale depends on the material found at the dump. For him, it is the 'found object' that is at the origin of the misappropriation and the evocation of an object or food. This approach underlines the contemporary nature of his creation, which embodies a critique of the Anthropocene.
For Kasper De Vos, the act of creating is the result of the oscillation between unconscious inspiration and the work of the sculptor guided by the material.
Like a cadaver exquis the exhibition “Sluimertijd” is marked by the drift of a Belgianness, a caustic and funny spirit that makes us laugh and cry at the same time, without forgetting that this deliberate interpretation of our reality has a touching tone but is no less caustic.

Kasper De Vos his work is part of several private and public collections including the Flemish Community and most recently the Middelheim Museum, where his work will become part of the collection presentation later this year.

The artist’s book "UNO" was launched in 2021 on the occasion of Kasper De Vos his exhibition Pushing And Pulling The Center To The Mirror at M HKA's Inbox. The book was published by Stockmans Art Books in collaboration with PLUS-ONE Gallery.