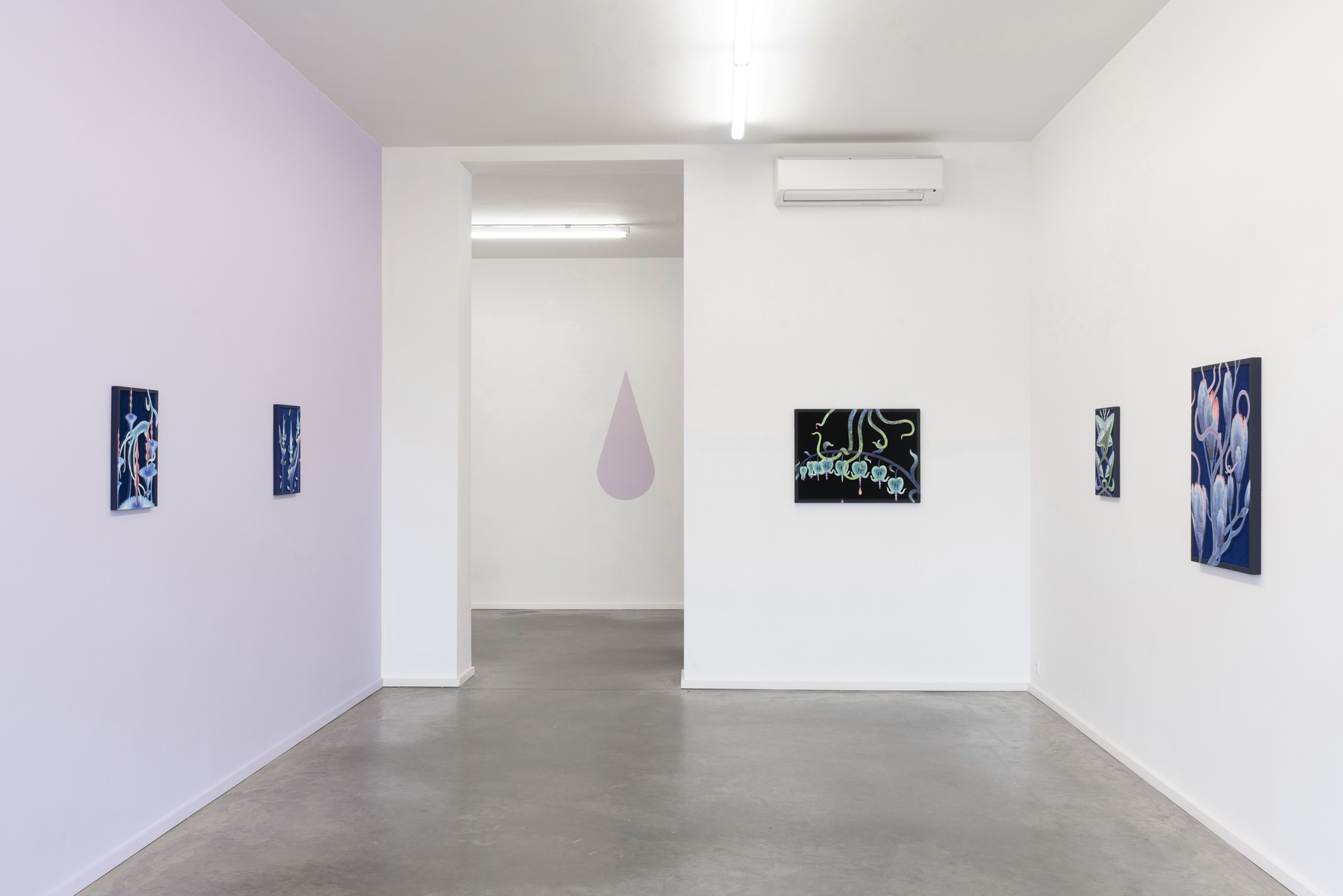 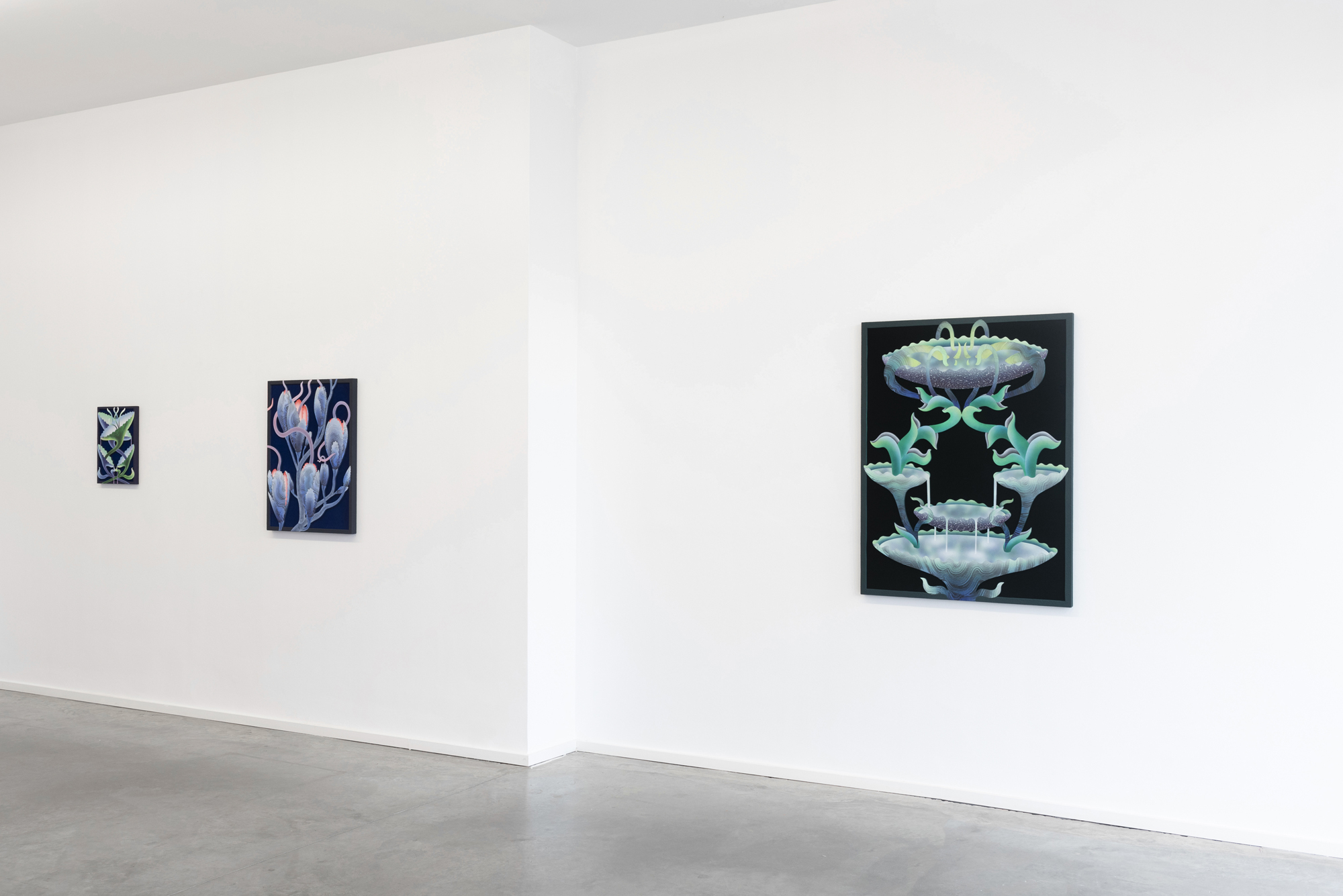 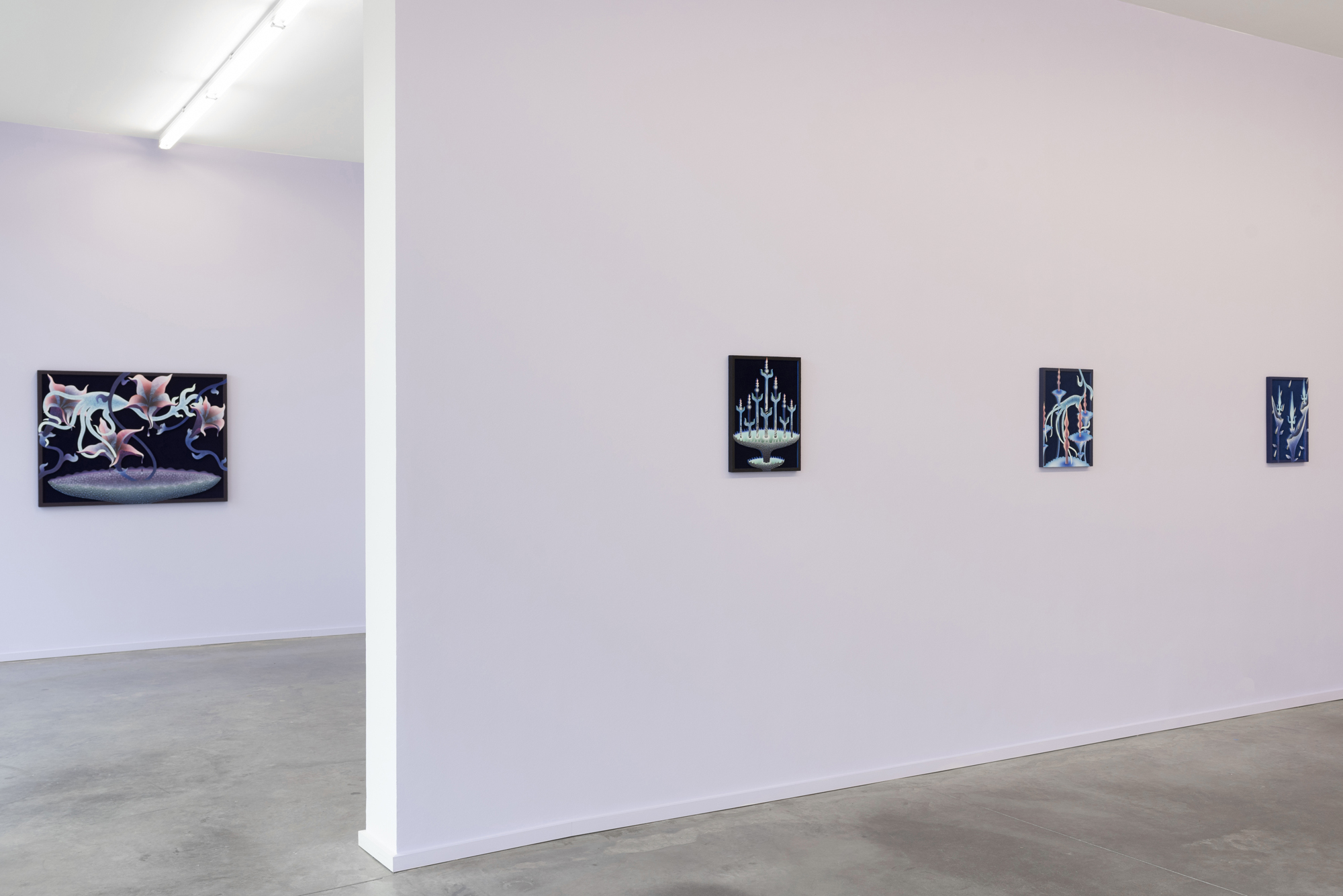 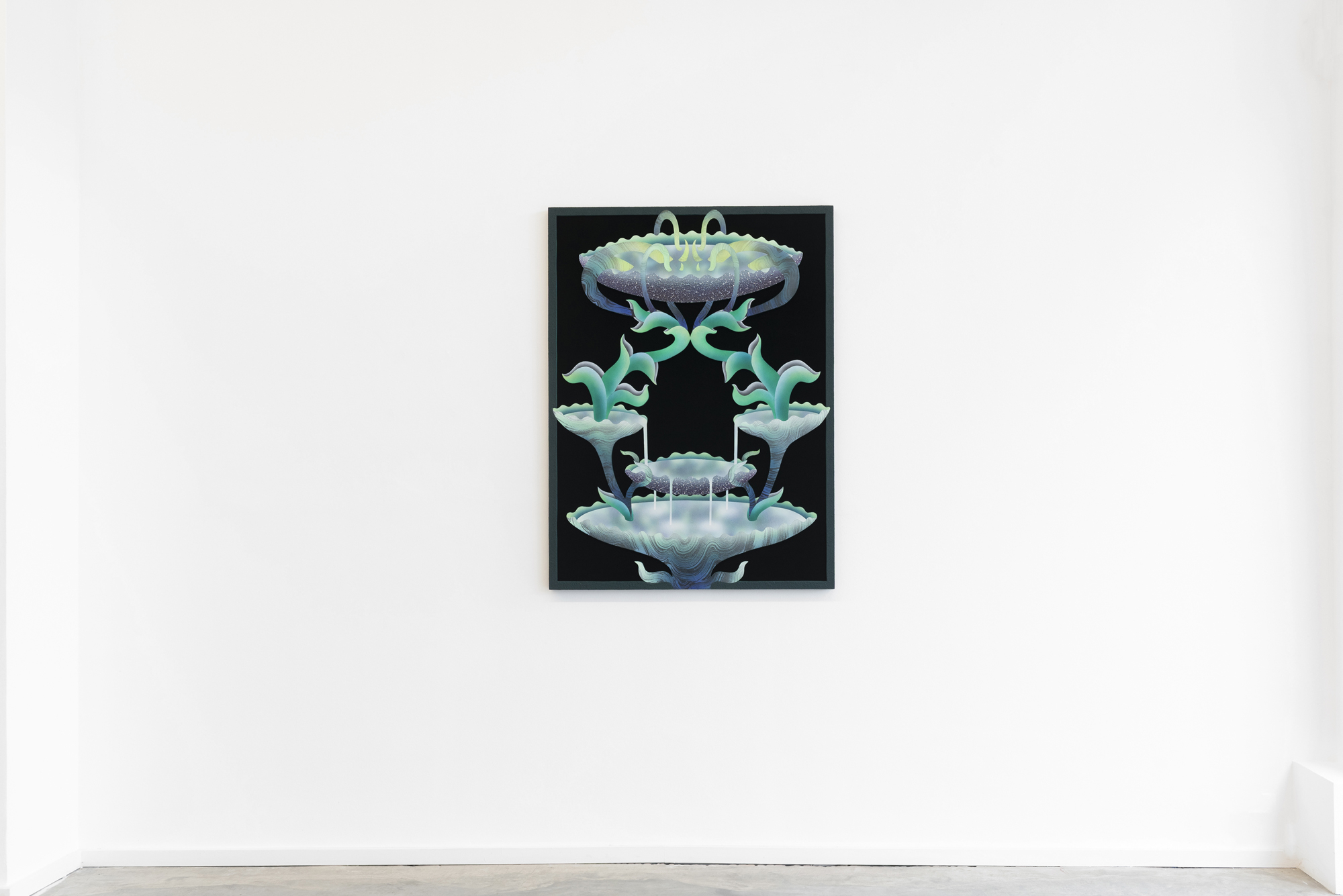 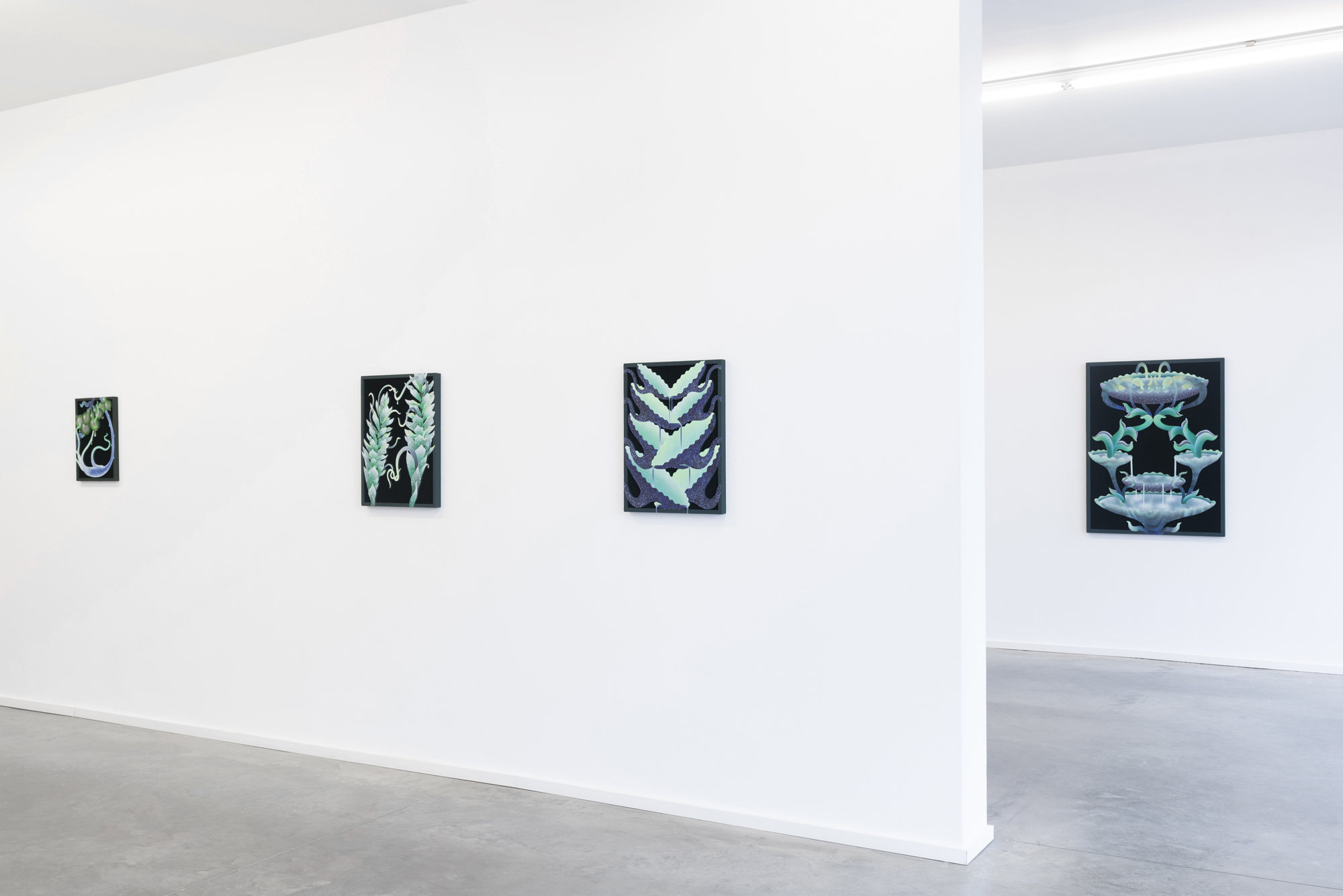 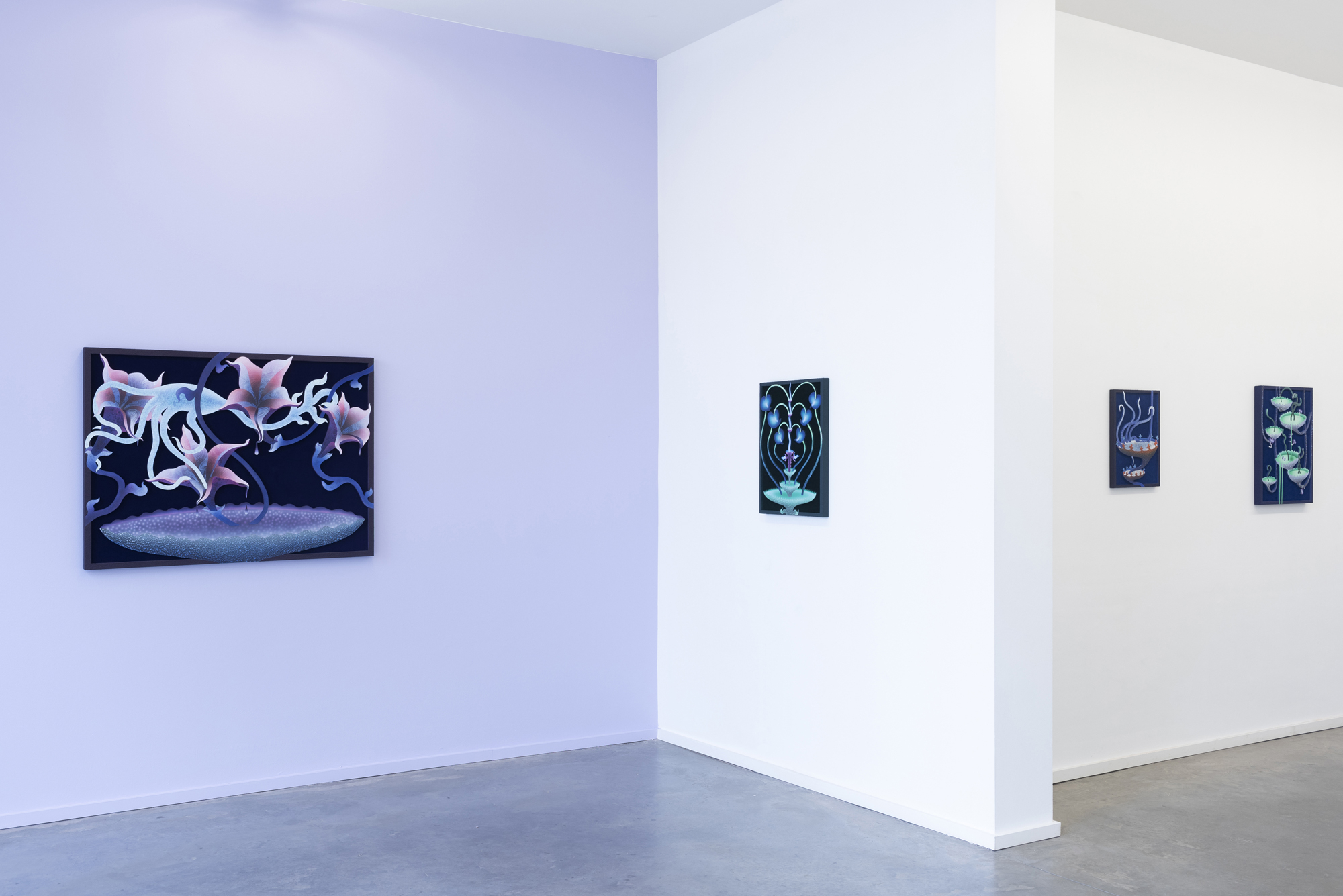 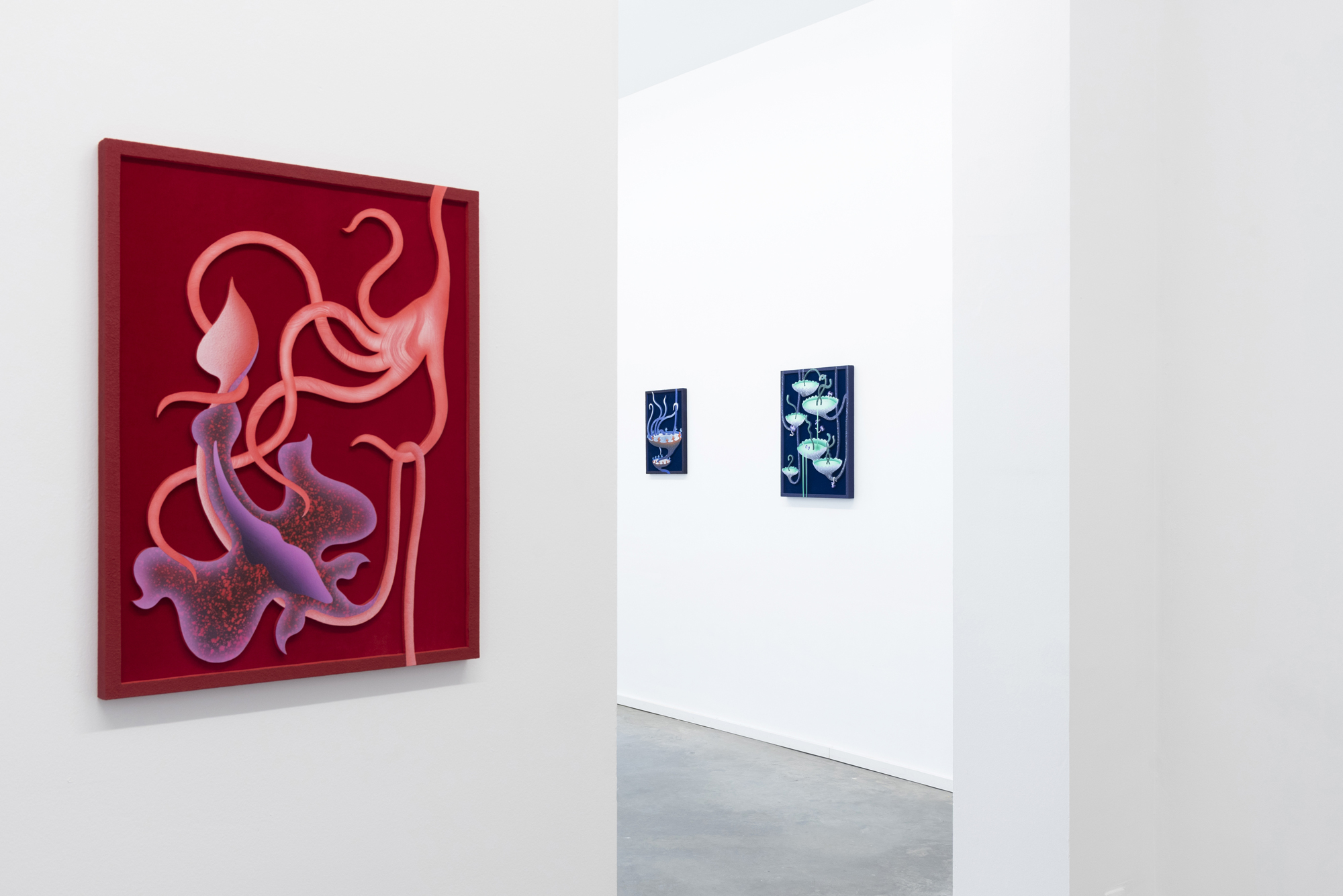 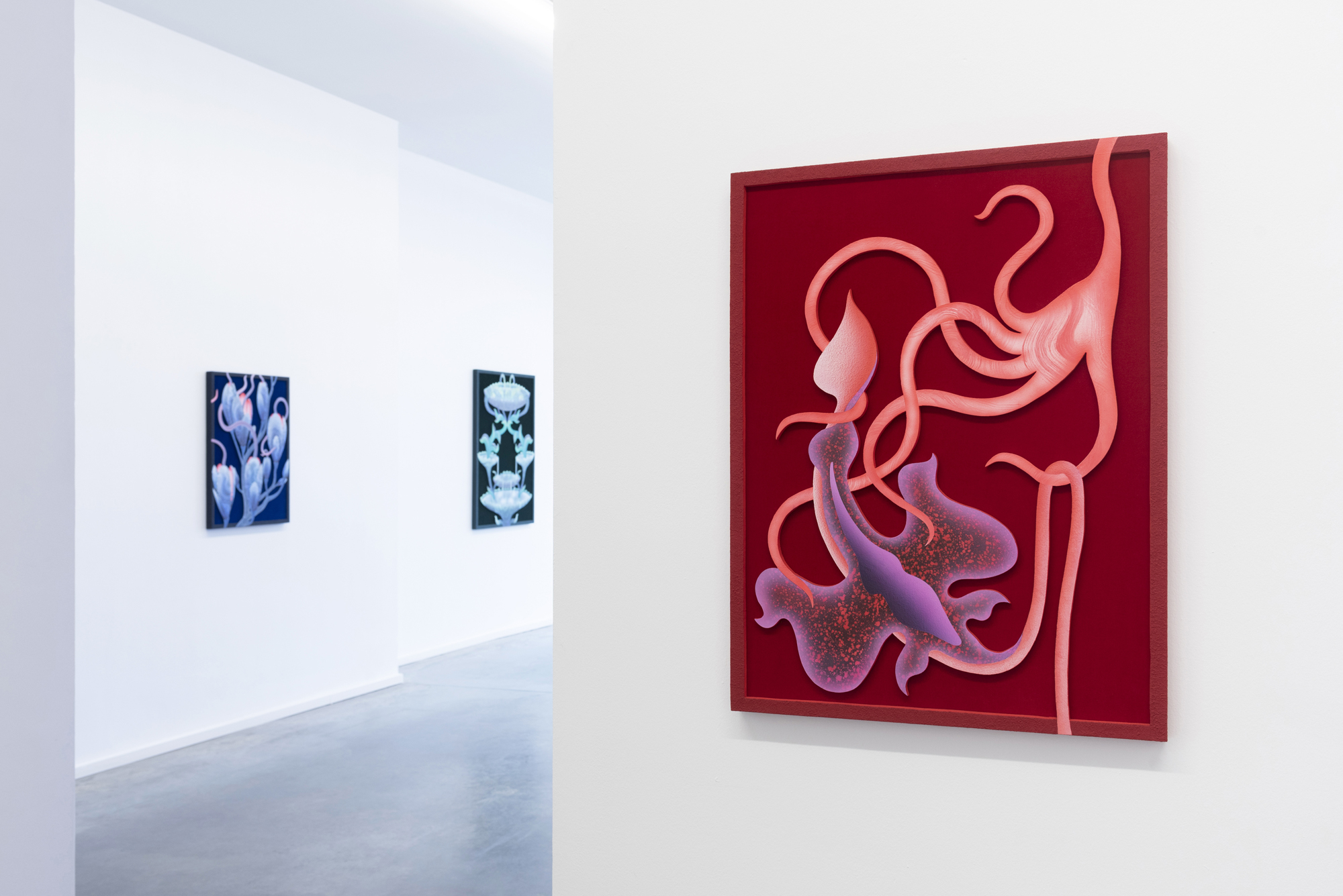 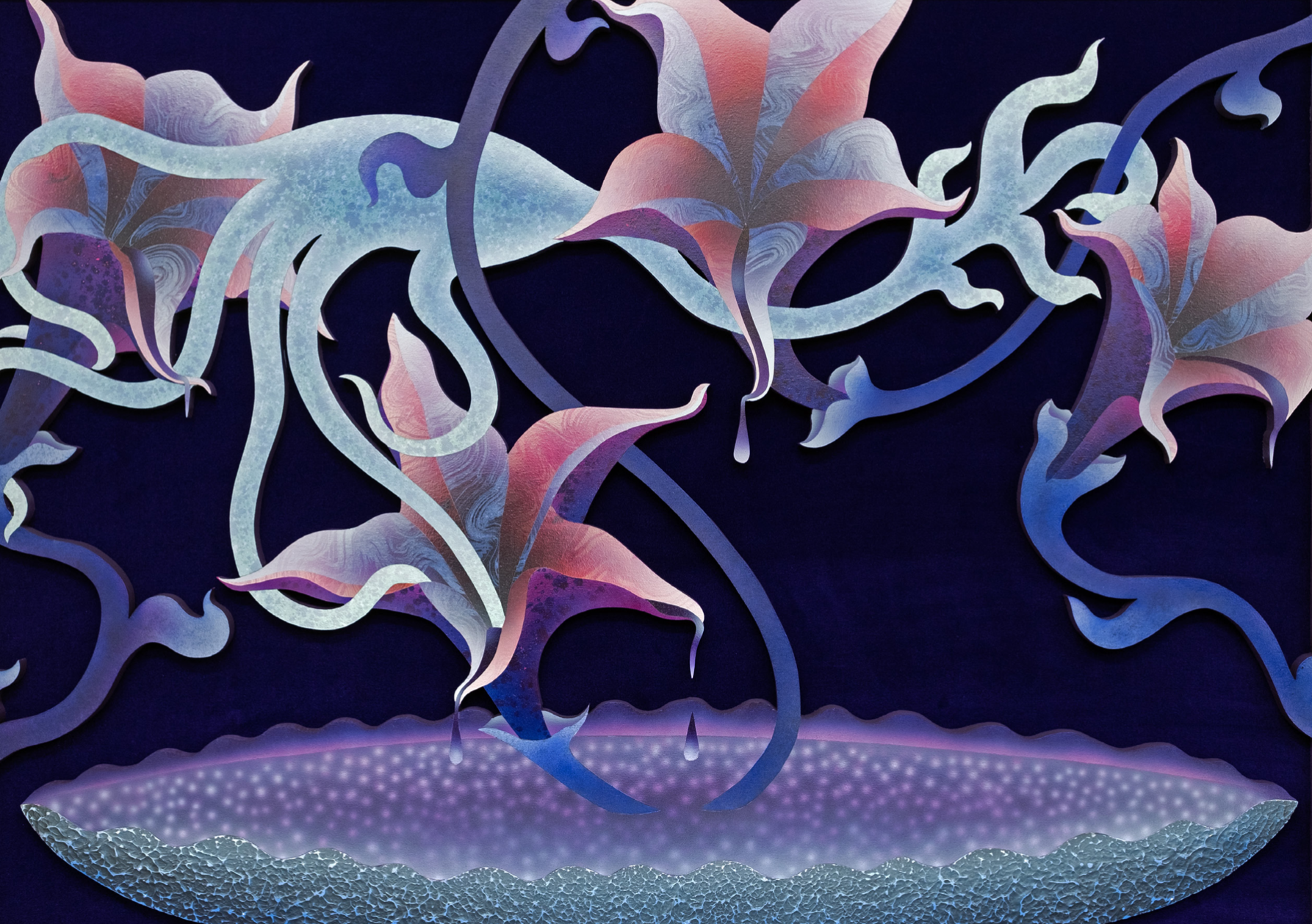 Solo exhibition of Mevlana Lipp (1989, DE), who lives in Leverkusen and works in Düsseldorf.

It stretches, furrows, snakes about. It grows like a vine, inexorably. It feels and grasps its way. It nudges and sniffs. Glowing and wafting, one arm stretches to the next. All is connected. One leaf touches the next. Pushes a feeler into a damp bowl. Overflowing from one flower to the next. Dusts it magically, glowing in the tingling, grasping touch of the flower tickler.

In the reliefs of Mevlana Lipp, I am immersed in a distant world that seems vaguely familiar. As if I had already been there. For me, Mevlana Lipp is like a researcher, a botanist who loves his plants and observes them in all their life rhythms, understanding and comprehending them, making me an observer of this flora and fauna, utterly extraterrestrial to me. With their colorful glow and social interaction, they remind me of the enchanting plant kingdom of the planet Pandora, which we encountered in the 2009 film Avatar. In his reliefs, Mevlana Lipp allows me a microscopic, precise view of the habitat of another planet, his own inner Pandora. What grows there? What lives there? It is as if I had just touched these plant creations and they had just been animated by this touch to a lively glow, as if I had initiated the fertilization taking place before my very eyes.

This alien, glowing microworld reminds me of the fine and complex interactions of our earthly plant kingdom. It was surely inspired by looking closely and observing growing and blossoming flowers in the springtime air. Or the fantastic world underwater, anemones and the splendorous colors of a coral reef. Or immersing oneself in the human body itself. The imagining of the smallest, most microscopic components of our organism. And not least, I feel myself reminded of the ancient visual world of Tarot cards: cups,
batons, swords, and coins. These are the protagonists in Mevlana Lipp’s works. They act and rest, they touch and limit, they grow and die, they fill up and empty, they open and close, they complete all layers of being. They symbolize life in its essential symbiosis of being.

In his works, I learn how everything alive is in constant contact. Every action has a reaction. Every detail is engaged in a constant exchange with the next. It is the intimate description of a state of oneness, a network of energy that flows through everything that lives. The concept of the network recalls the Gaia hypothesis of James Lovelock, according to which the earth is a highly networked system of everything living. If we look at the finely woven fabric of life in the forest, we know that this is precisely the case. A fitting metaphor here is offered by the aforementioned planet Pandora, as described by James Cameron. On Pandora there is a personified consciousness known as Eywa, which has developed a kind of self-awareness based on a multitude of neuronal linkages. Tied to all life, through each tree, plant, and every creature, Eywa develops multifarious synaptic contacts and is thus comparable to a highly developed global nervous system.

Mevlana Lipp’s virtuosic reliefs come from an inner connectedness to an Eywa and at the same time—and in my view this is central to understanding his work—they manifest a decisive break and the resulting separation of humanity from this very paradisaical state of oneness. His reliefs are a testimony to humanity’s distance and alienation, and the accompanying artificial distortion of nature by civilization. The forest is not understood as a highly developed nervous system, as a living subject, but instead is degraded to a pure object of use. Lipp uses material that refers to wood, preferably plywood. The often color-devouring depths of the background of the works is created by the support, which is based on colored velvet. The choice of material emblematizes the acute state of humanity—of course absent—for it seems organic, but is an artificially made product of glue and wood. A dead product that appears alive, like a plastic plant or fruit as decoration. The forests are dying, the oceans are poisoned. The climate is changing. We know all that.

And so I understand Mevlana Lipp’s work as a testimony: to the unity and the awareness of life and death, to memory and emotion, to the profound knowledge that all life is in a fine symbiosis. The Circle of Life, from which the human being has fallen, thus tipping tipped the cycle of everything living so devastatingly out of balance. Now I think of the work of Nectar (2021) in which through blood-red fluid is passed from cup to cup.

In tarot, the Seven Cups describes the dance between vision and illusion. It is time to look more closely and to abandon the fantasy that we are separate from Eywa. In this way, strange creatures become familiar ones and we ourselves become part of the whole.