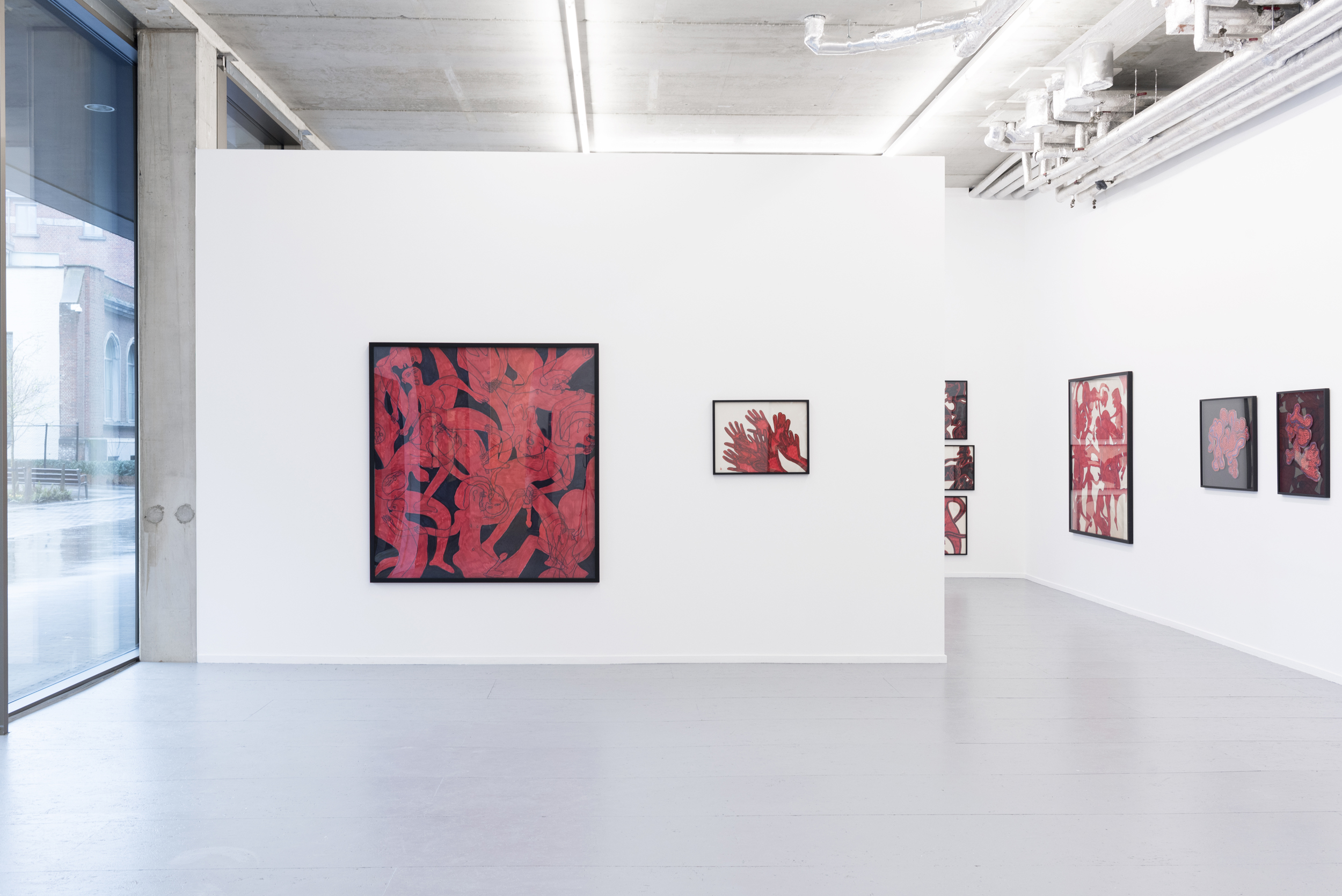 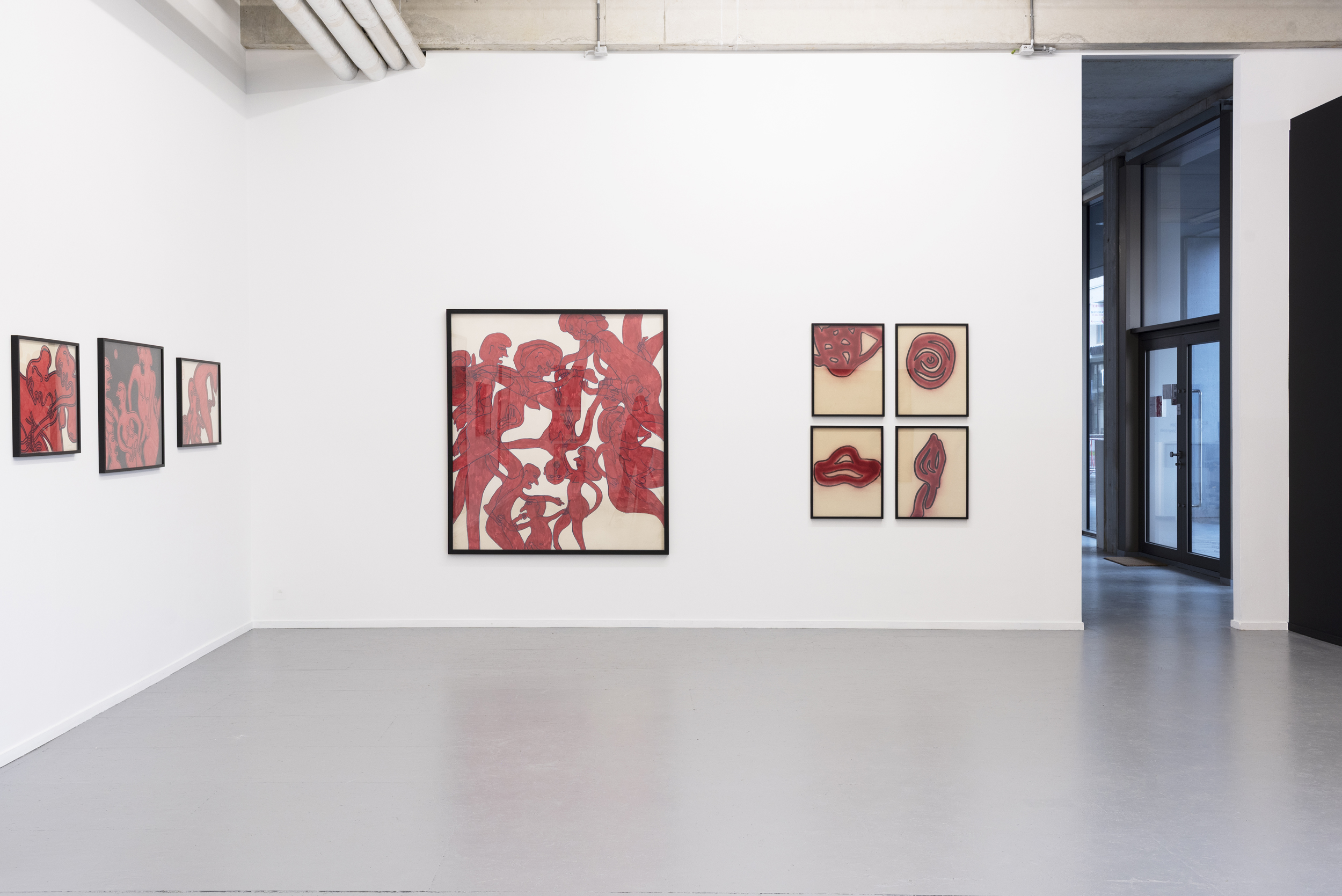 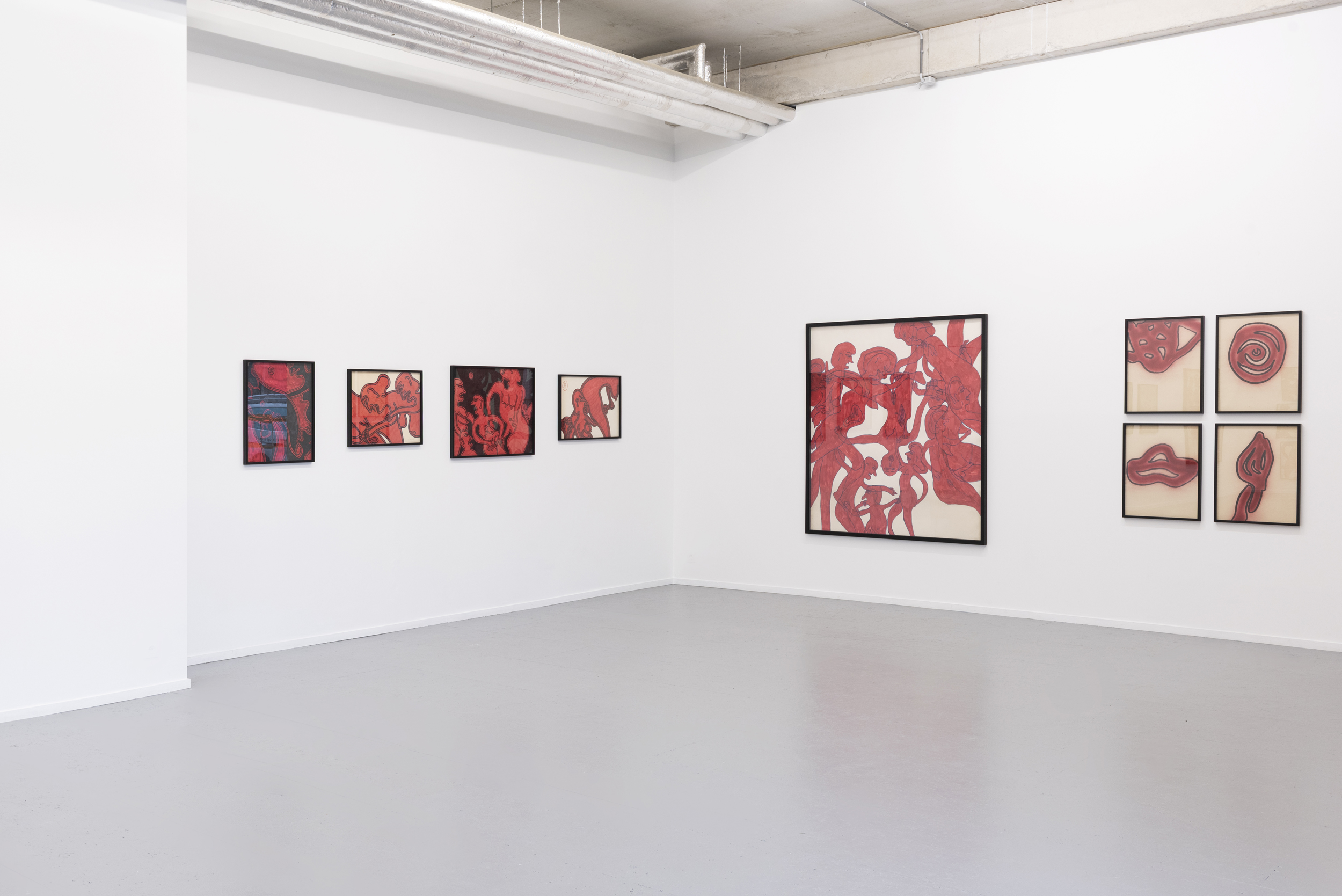 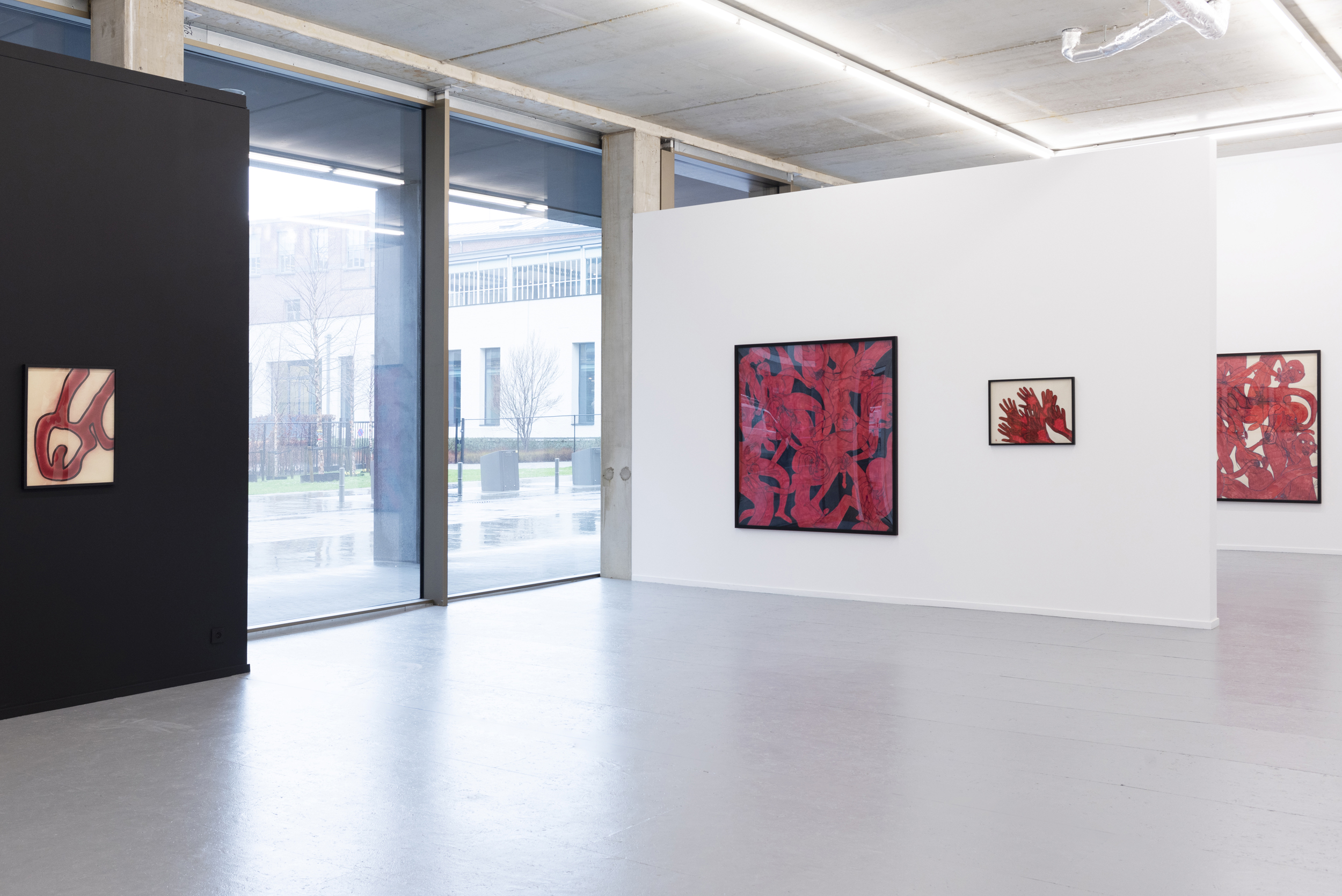 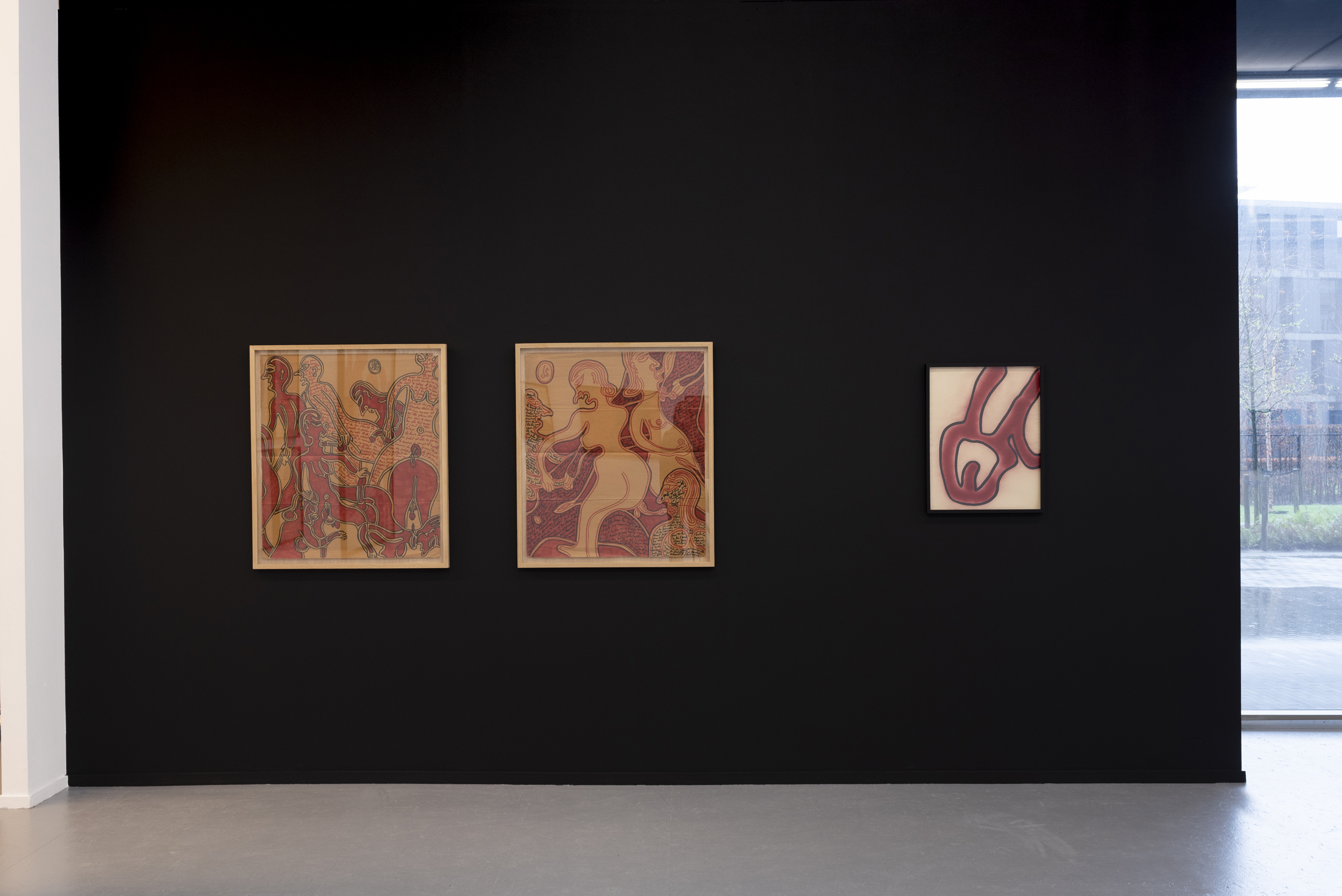 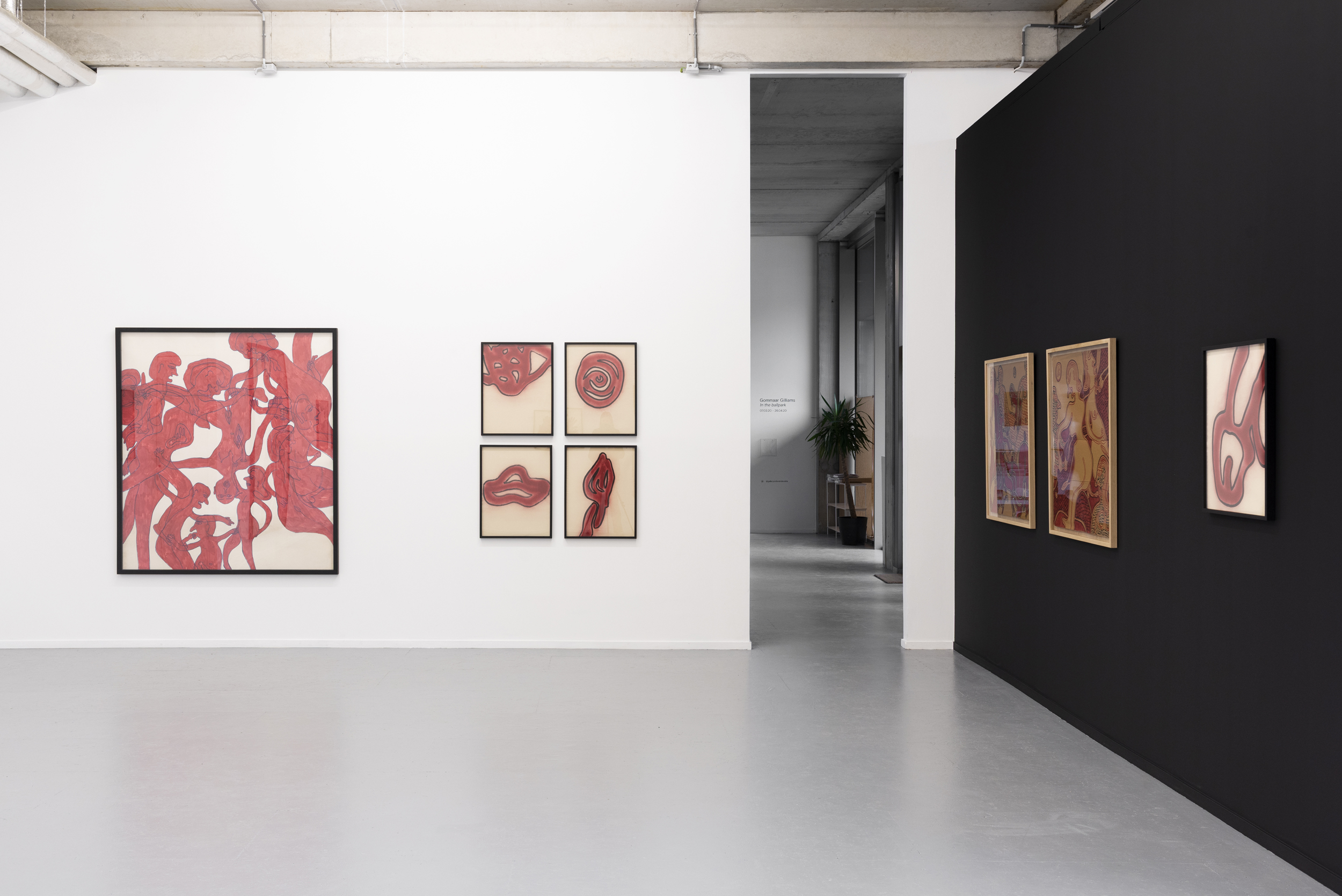 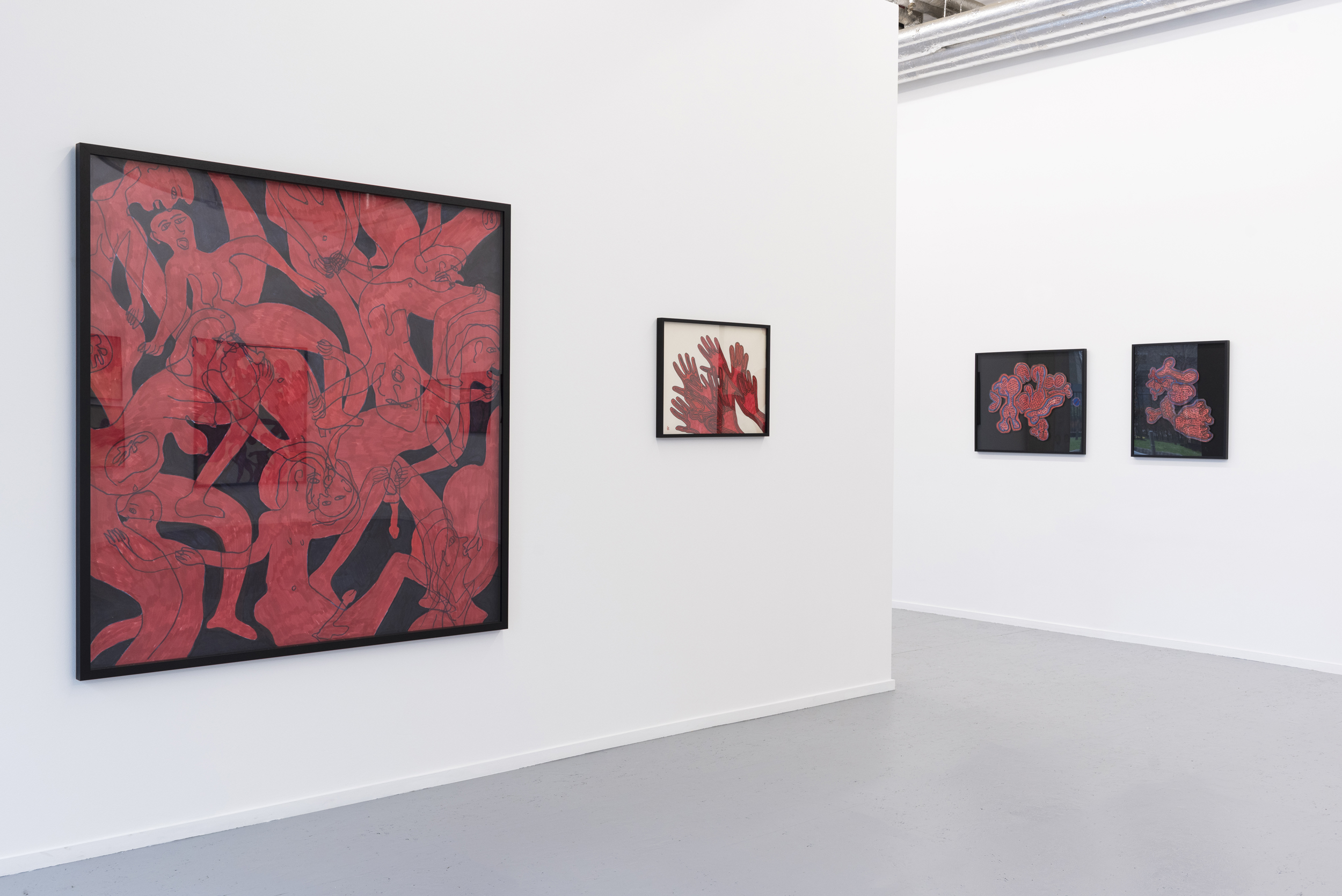 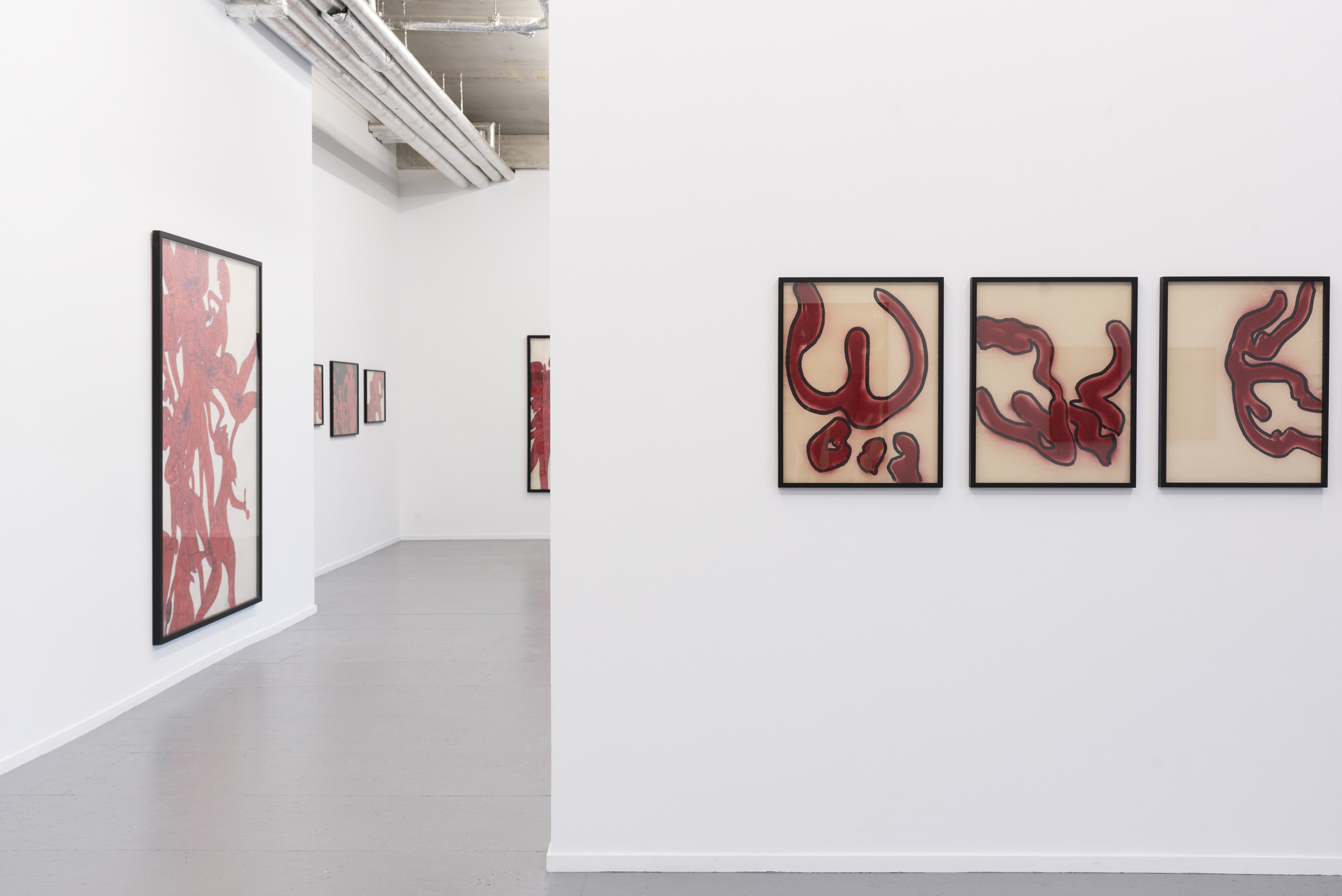 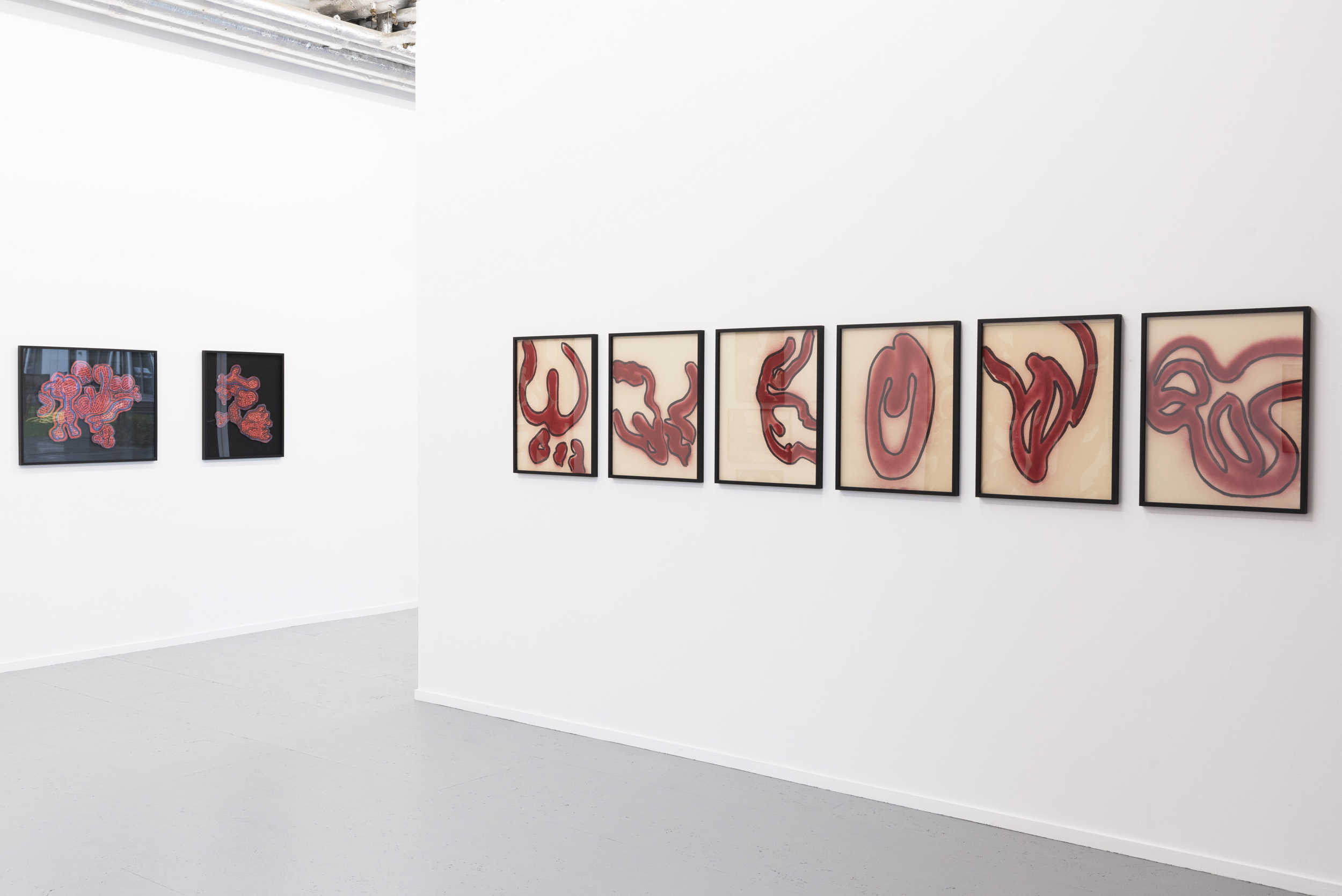 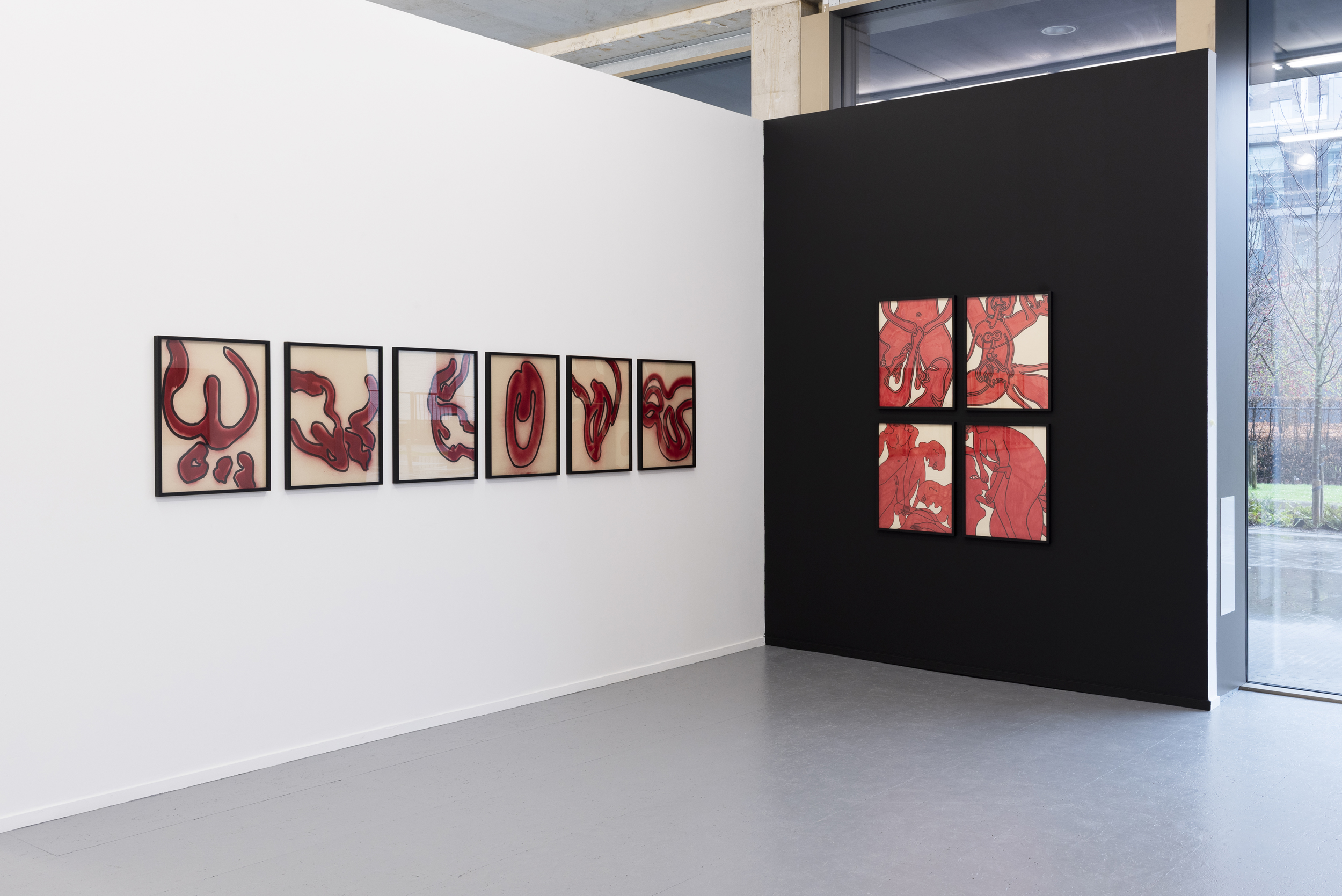 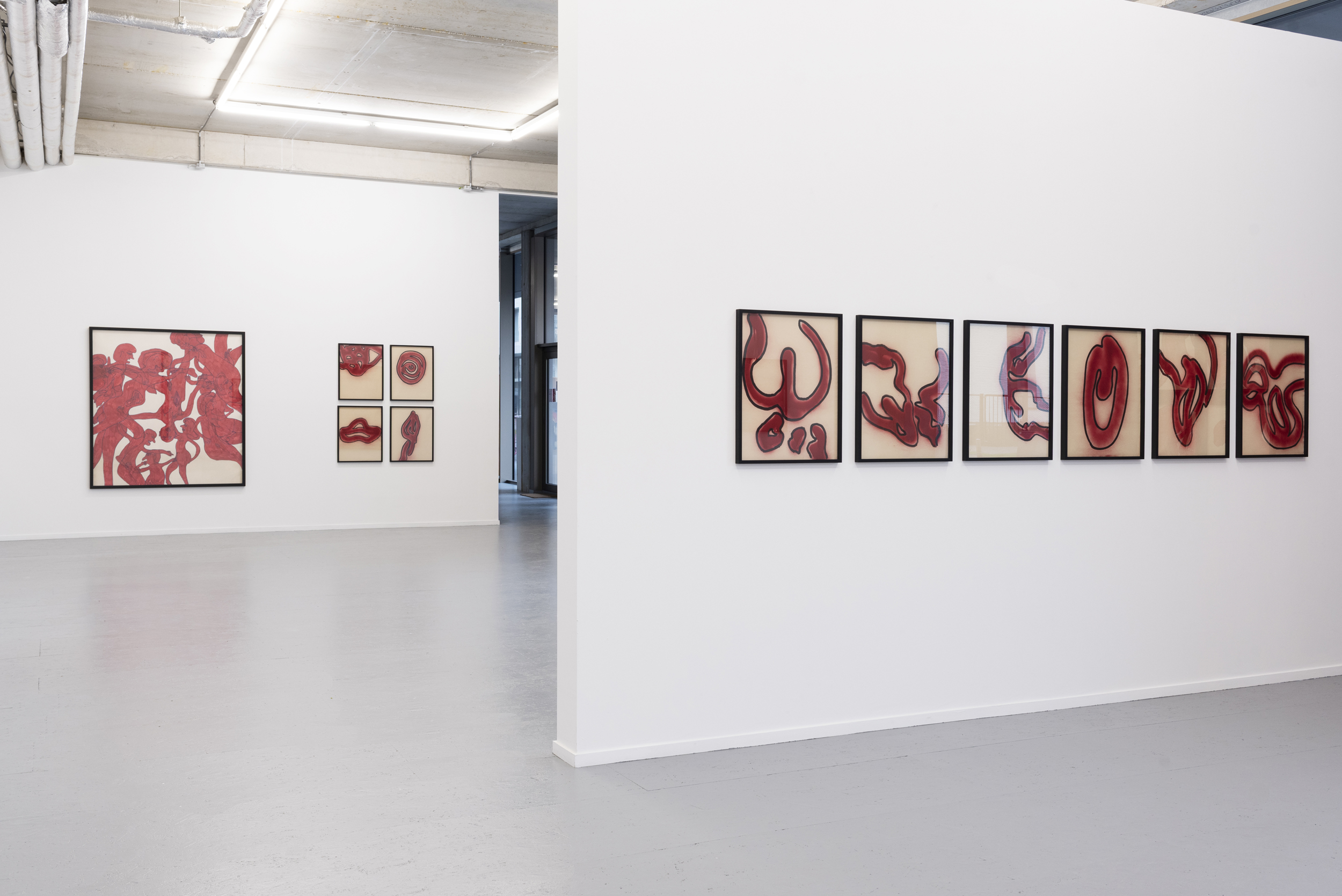 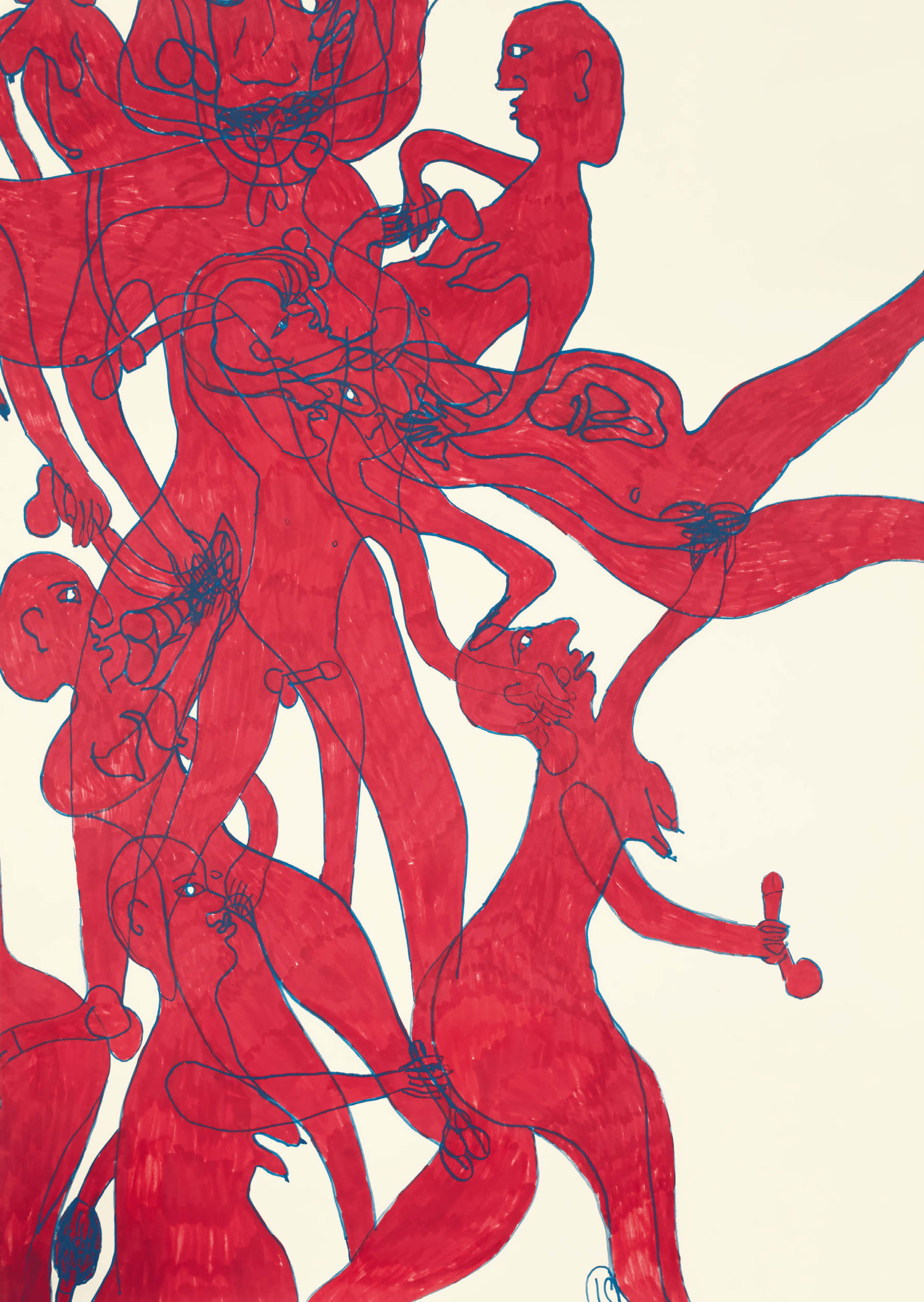 Jean Schwind (1935-1985), the most infamous and enigmatic figure in Belgian art of the 1970s, is the pseudonym of Jean Warie. He studies Romance Philology at Ghent University, and from 1966 to 1972 is an academic assistant there. In 1969 he has his first solo exhibition – somber drawings in black-and-white – at the Brussels gallery Fitzroy, of which he was a co-founder. The following year he presents a one-night-only exhibition of large-format erotic drawings. The exhibition subsequently travels to Ghent, Antwerp and Paris, and is meant as provocation. The subject – personages in an overheated and disorderly sex universe – and the elaboration reminiscent of Jean Dubuffet and graffiti, or of the orgiastic scenes of the surrealist André Masson, are in themselves fairly brutal, but in the societal context of the time this portrayal is also taken as a general attack on the reactionary tendency that hopes to 'save' culture from the up and coming wave of subversion. In Belgium, the socialist minister of justice Alfons Vranckx (1968-1973), attempts to squelch the moral decay by confiscating all cultural output deemed beyond the bounds of decency. This effort was to no avail; the invasion of low culture into art would only increase in strength. In this sense Schwind's erotic work presages that of artists who would later take up the baton and run with it.

In 1971 Schwind starts his one-man war against art itself, becoming the first and only Belgian
appropriation artist. He presents the Collection Schwind, an assemblage of pastiches of the
nouveaux réalistes. After this successful provocation he expands the 'anti-collection' into the
Schwind Foundation, and makes dozens of pastiches from other well-known artists that he terms
Hommages or Appropriations, including works of arte povera, Christo, Fontana and Broodthaers. He continues with his Occupations and Sealings of galleries that he had begun in 1970. In 1974, in Antwerp and Bruges, he takes part in major survey-exhibitions of contemporary art. He also works on a Belgian collection, with as capstone a large funeral wreath with A notre cher art belge/Schwind on the tricolor ribbon. With a fictitious death announcement, in May 1976, he draws a final line under his artistic practice.

Schwind was a spoilsport who deliberately violated the unwritten rules of the art world, an evil spirit who unleashed a modern iconoclastic fury. He was not out for recognition, not even attending his own openings. His acts were of a clandestine nature; of the few photos we have of Schwind, he is consistently pictured from the back. Like Marcel Broodthaers – but without MB's sense of diplomacy – Schwind directed his radical critique to the status of art and the artist. He went much further than the American appropriation art that, from the end of the Seventies with pastiches of 'iconic' works, would offer ironic commentary on the art industry. Hardly a surprise, for Schwind was not just a 'naughty' artist; rather, he is close akin to the Libertines, outlaws driven by hedonism, intense impiety and contempt for the reining morality.