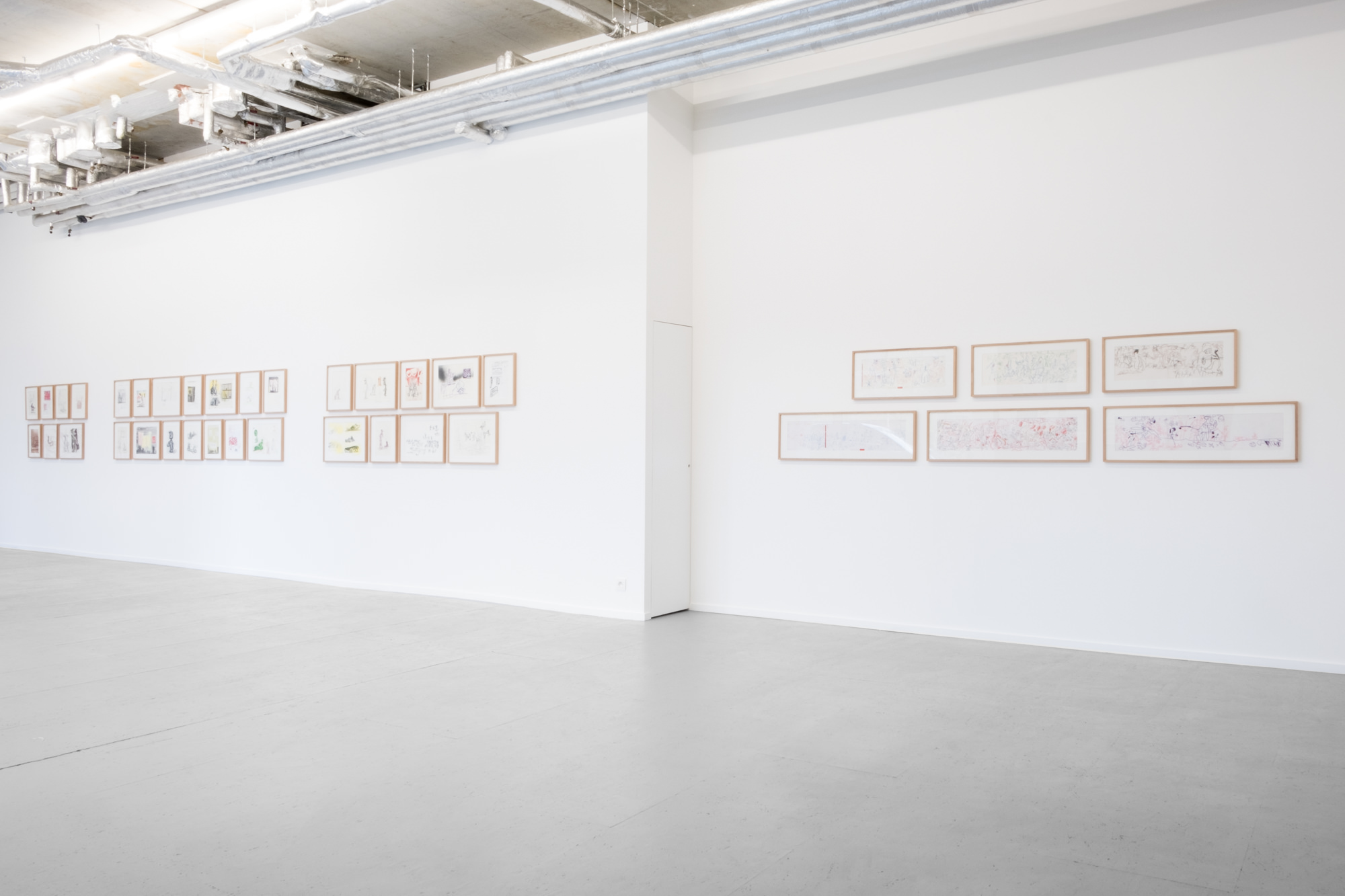 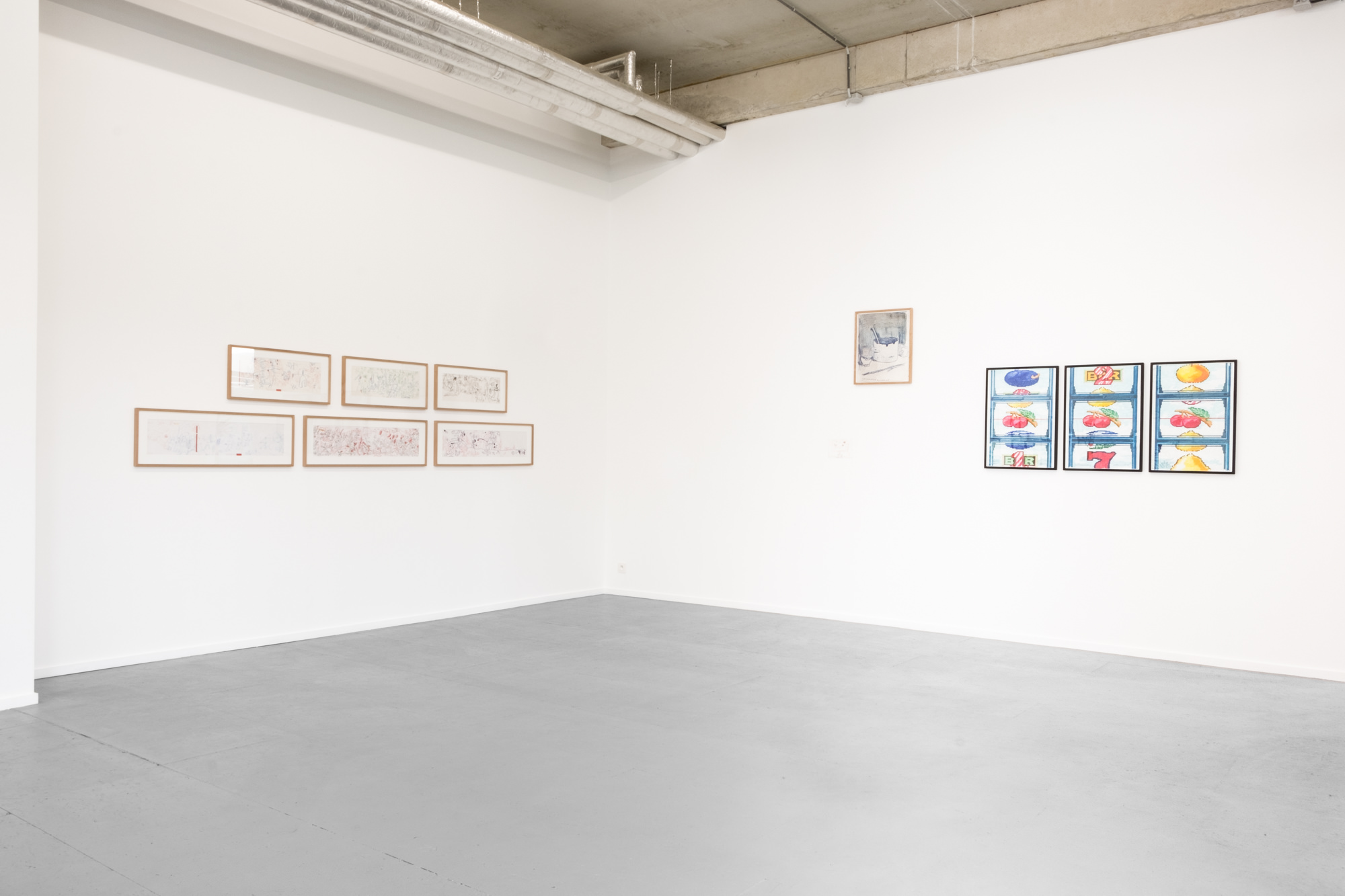 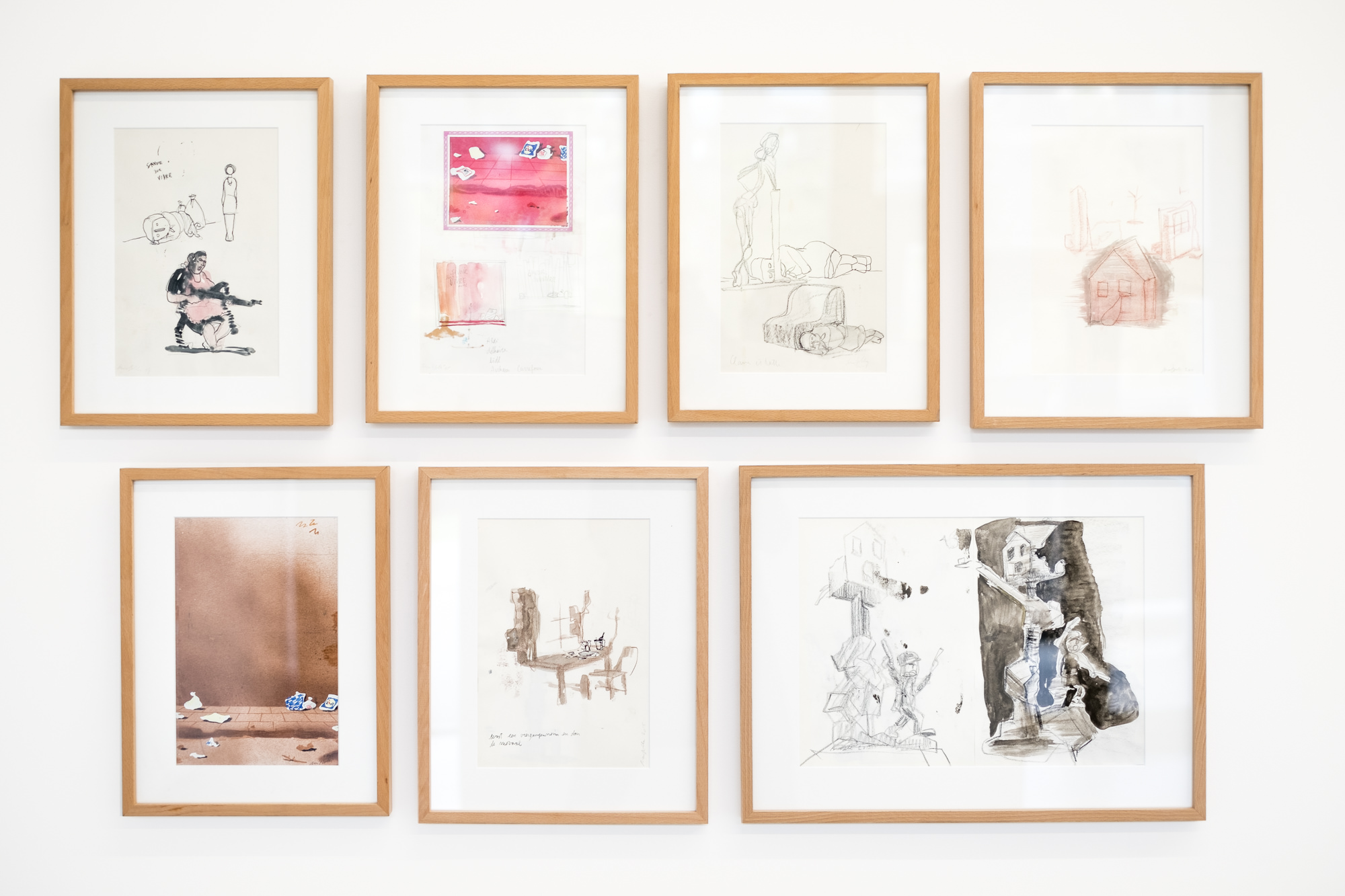 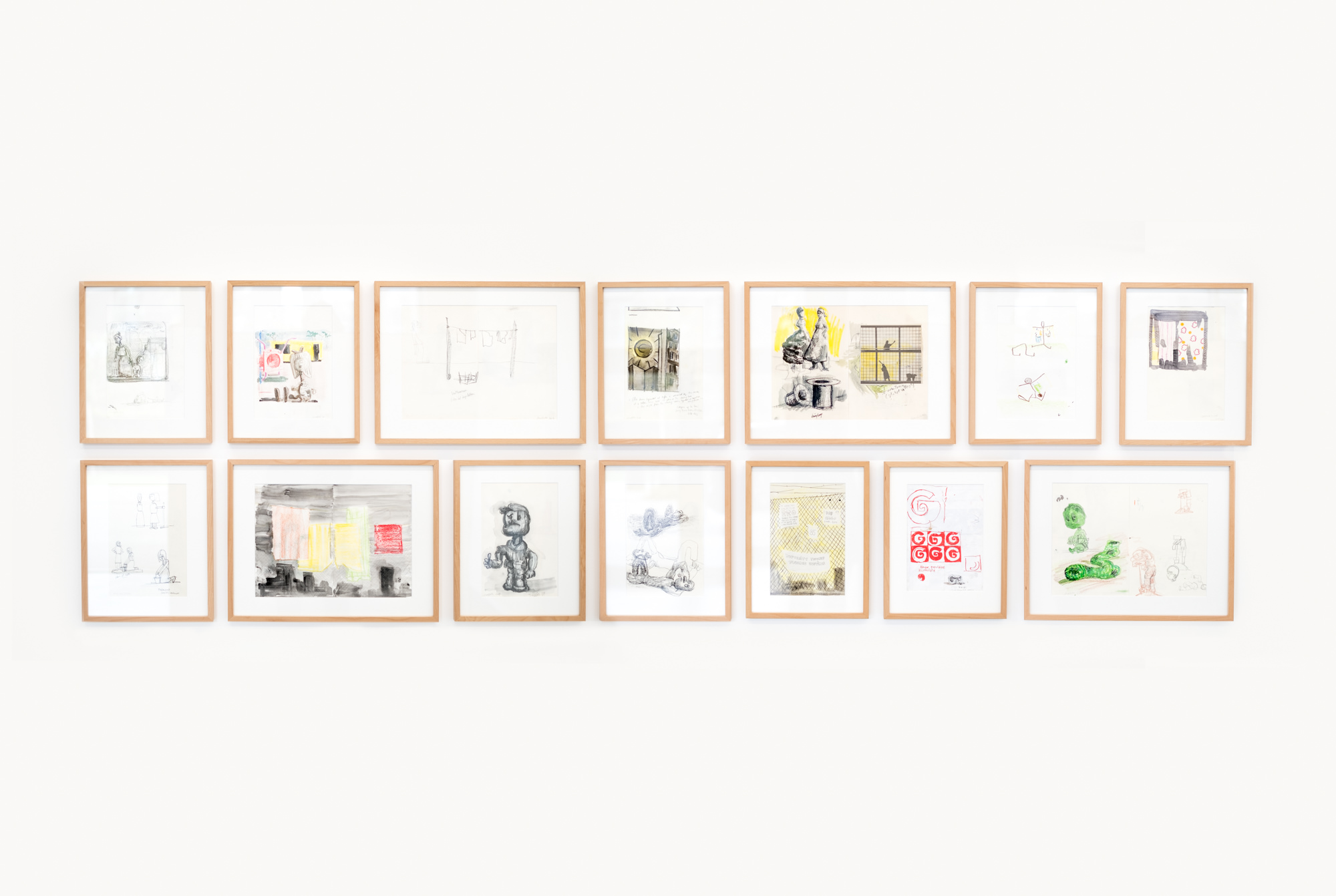 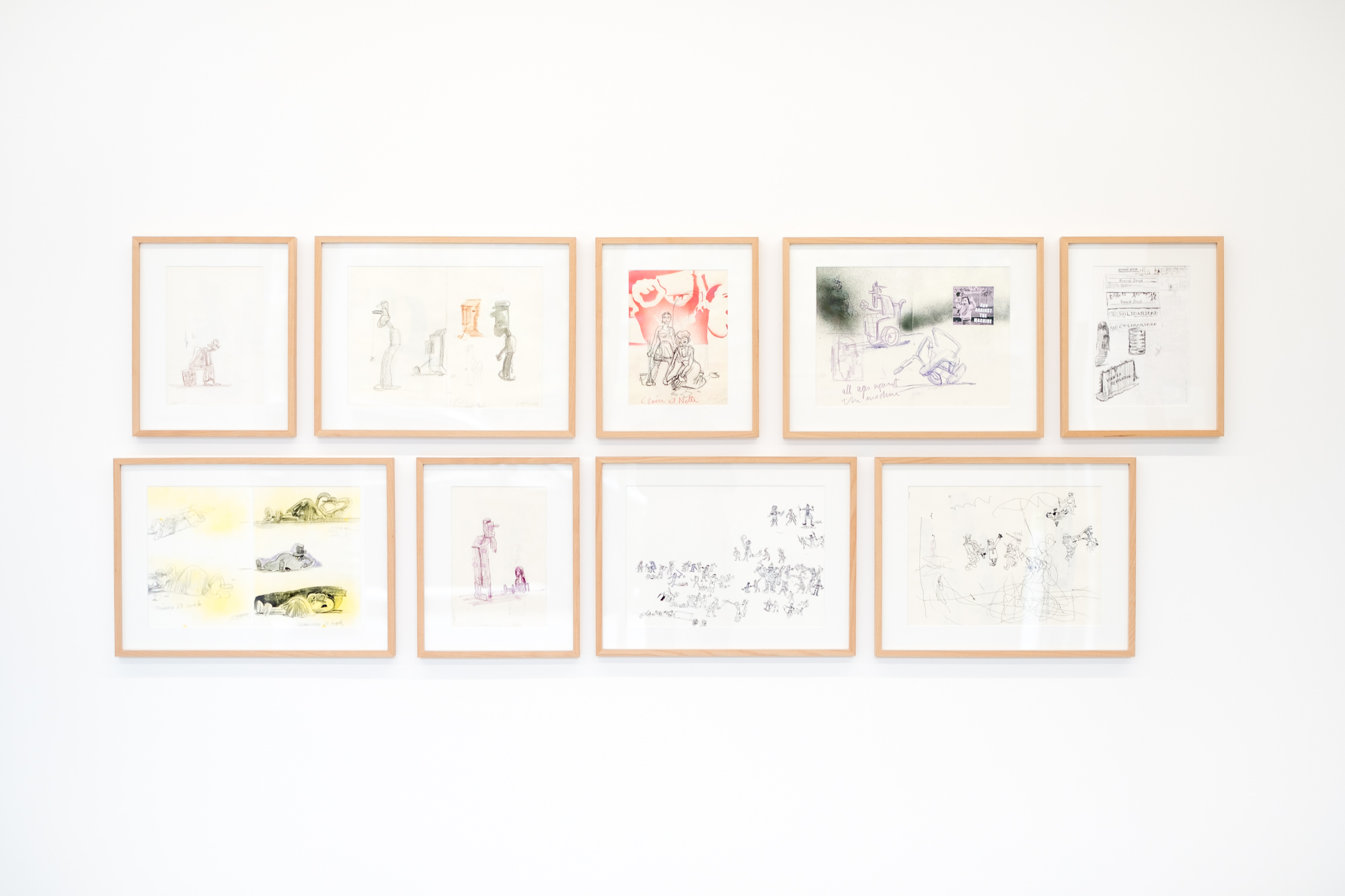 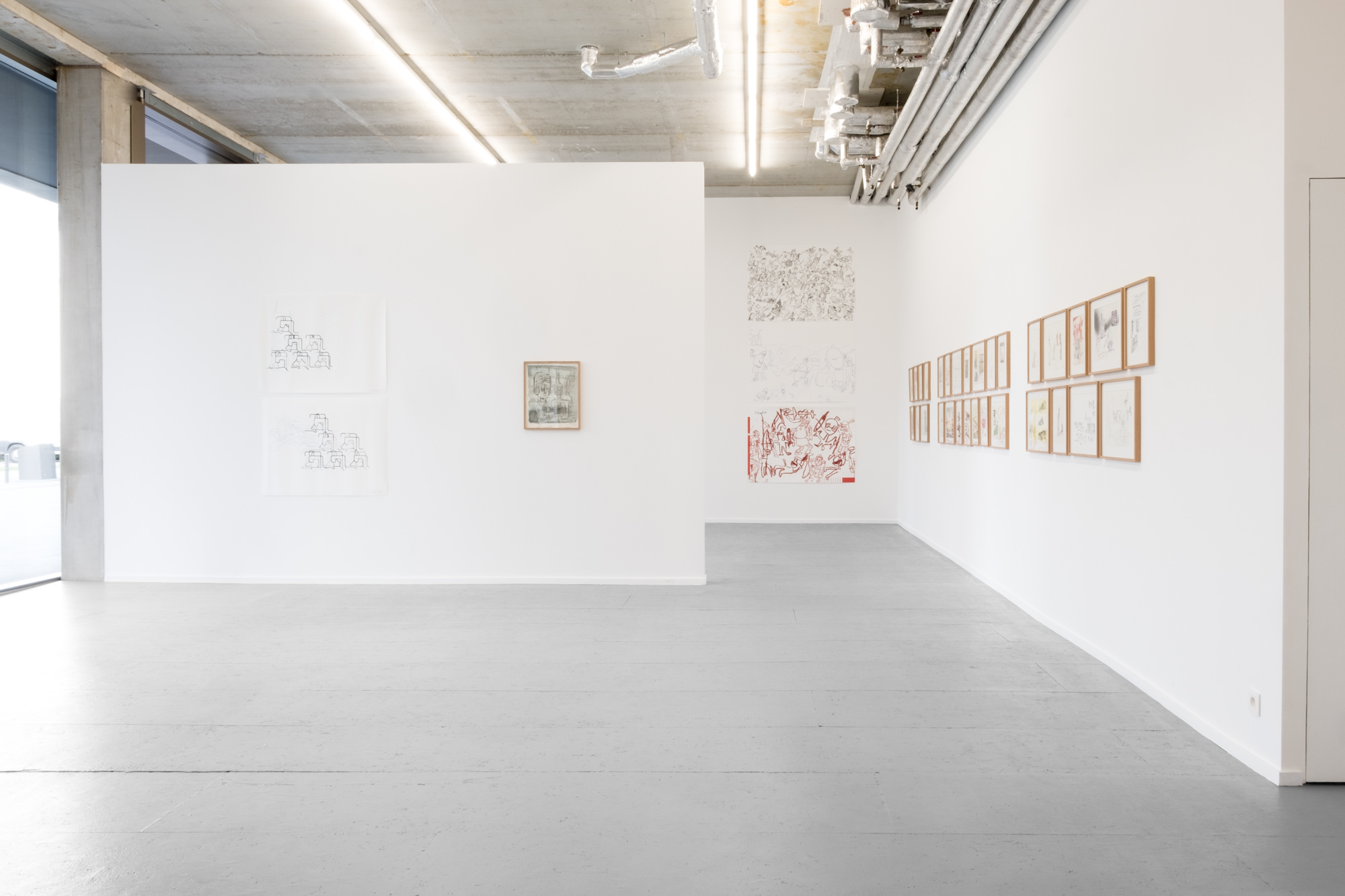 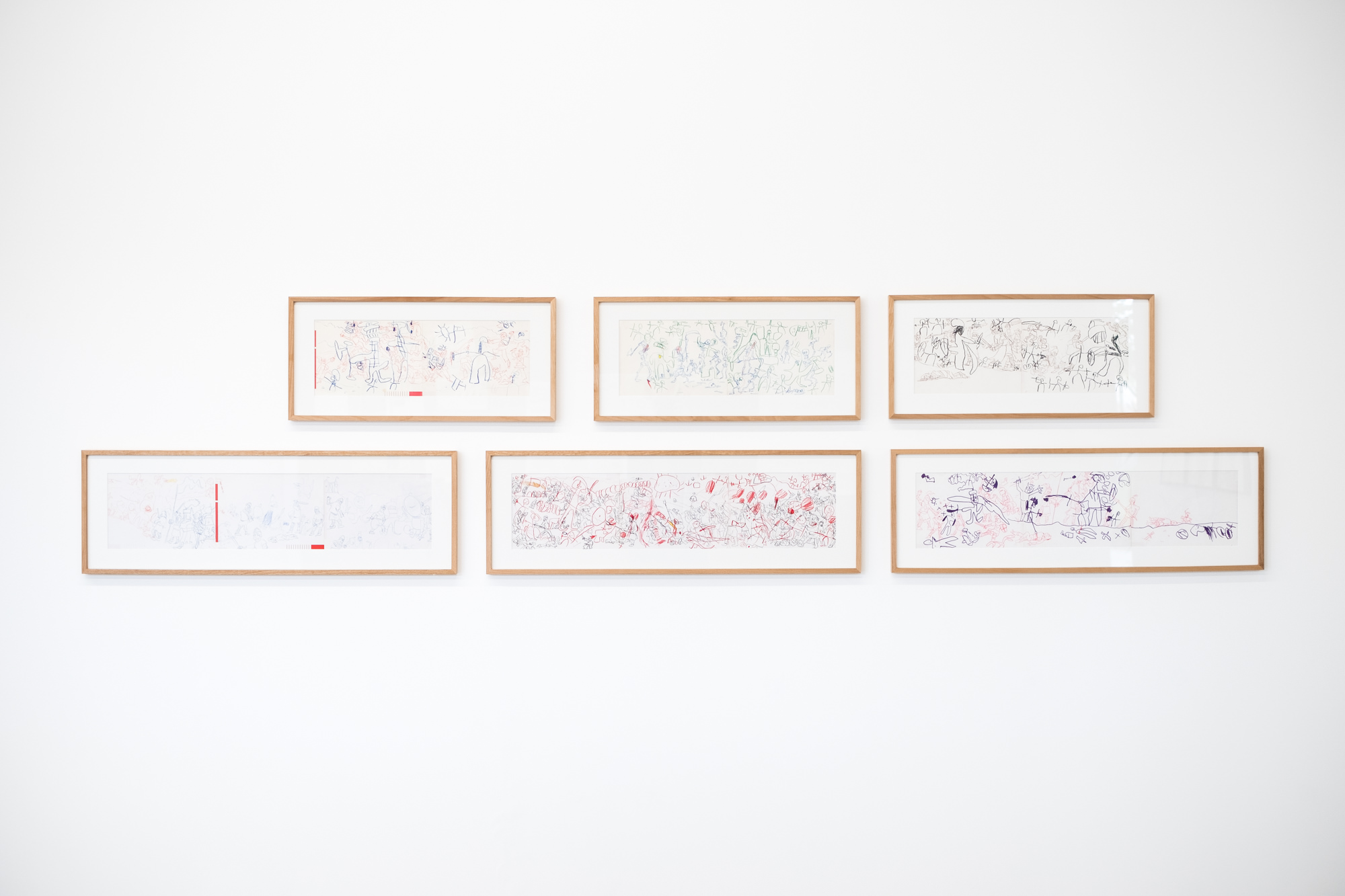 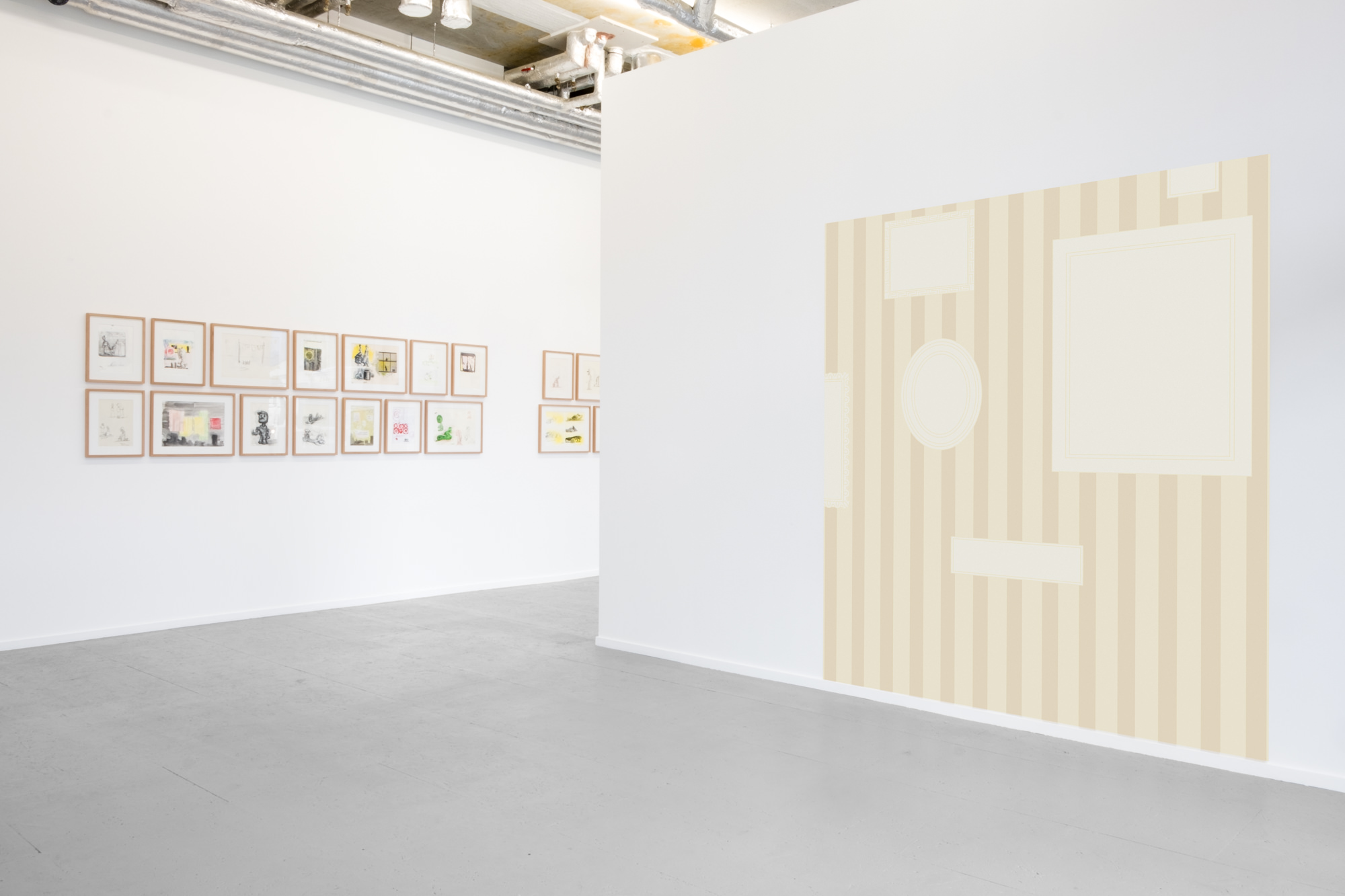 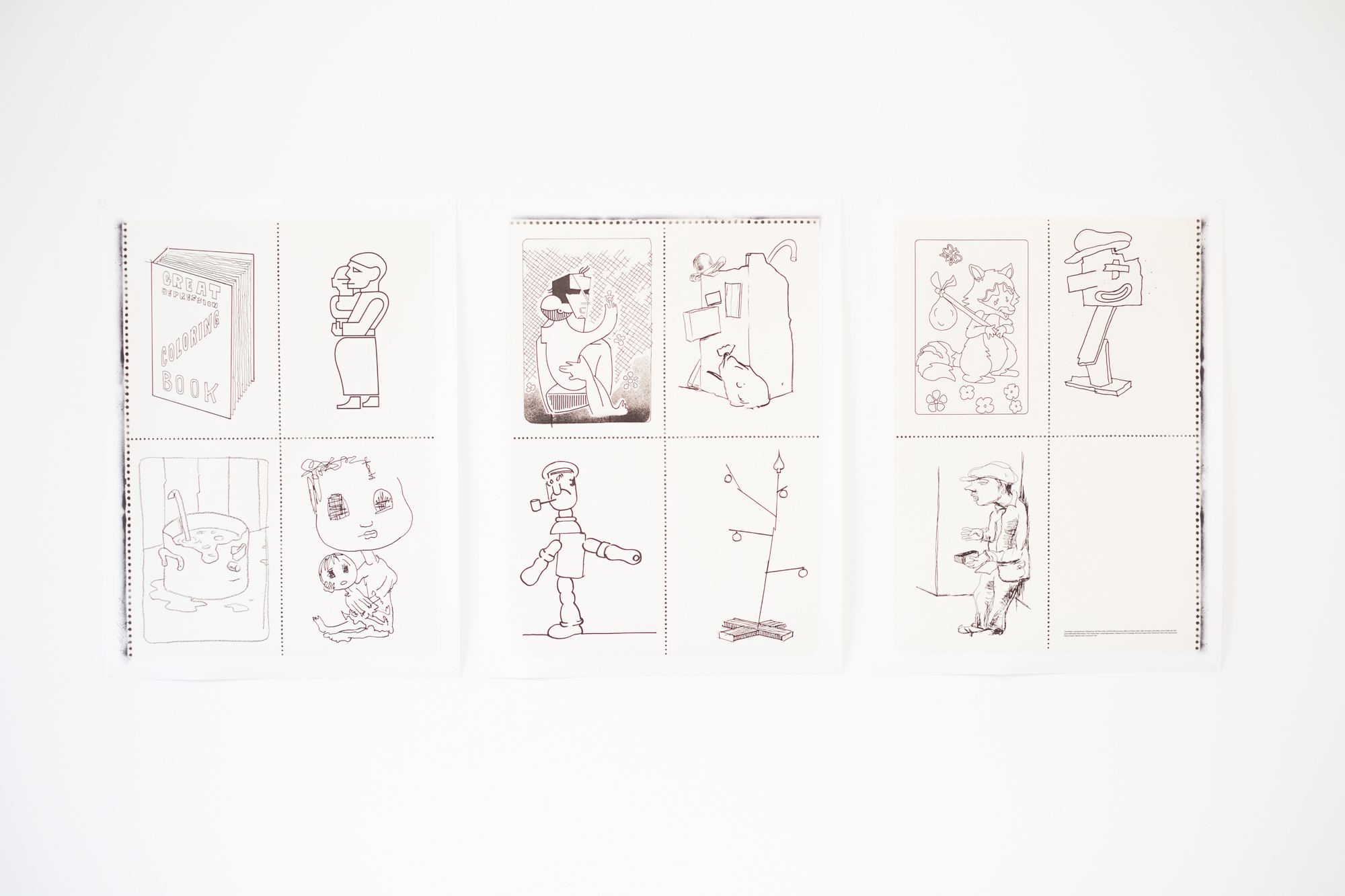 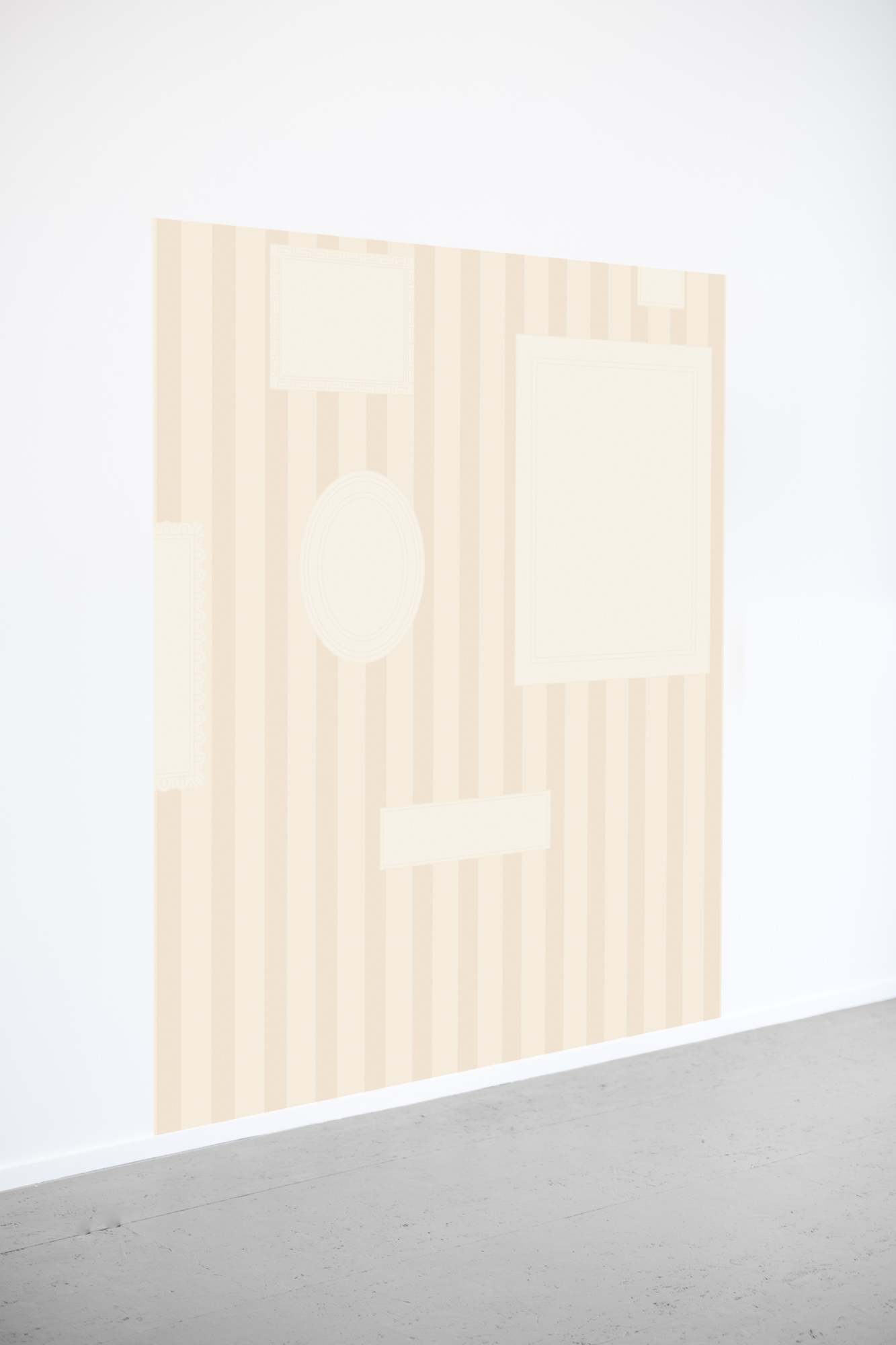 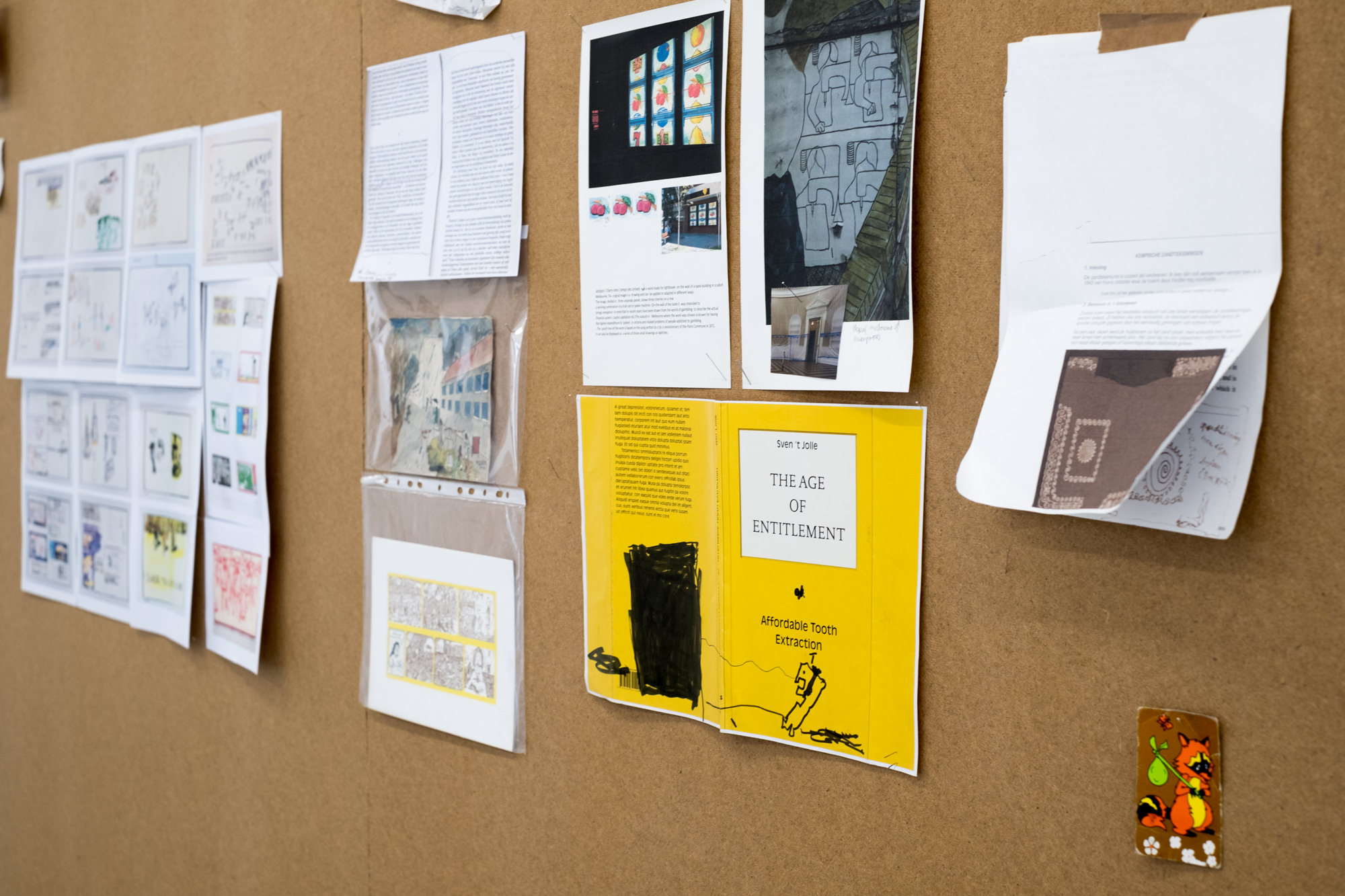 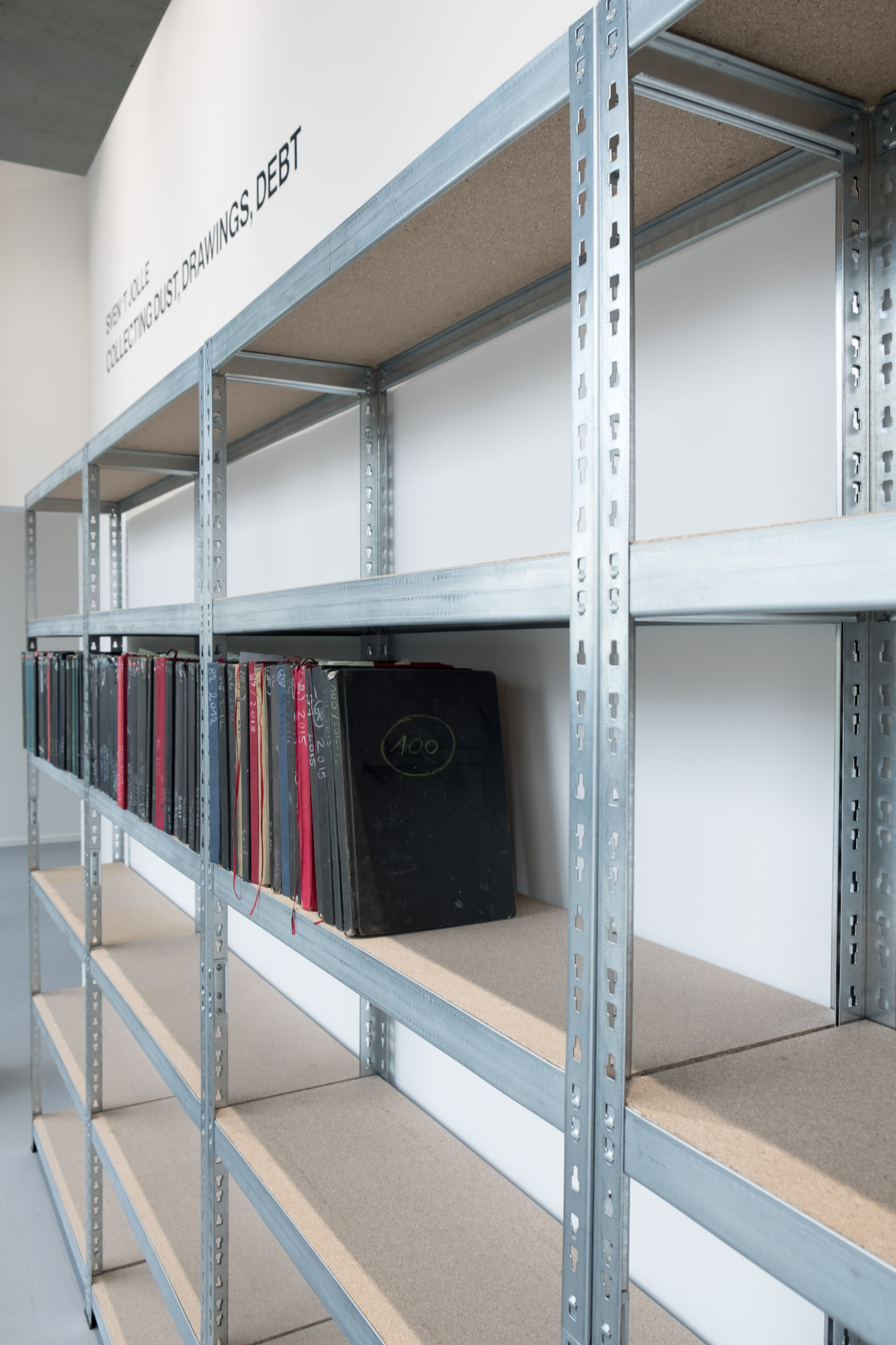 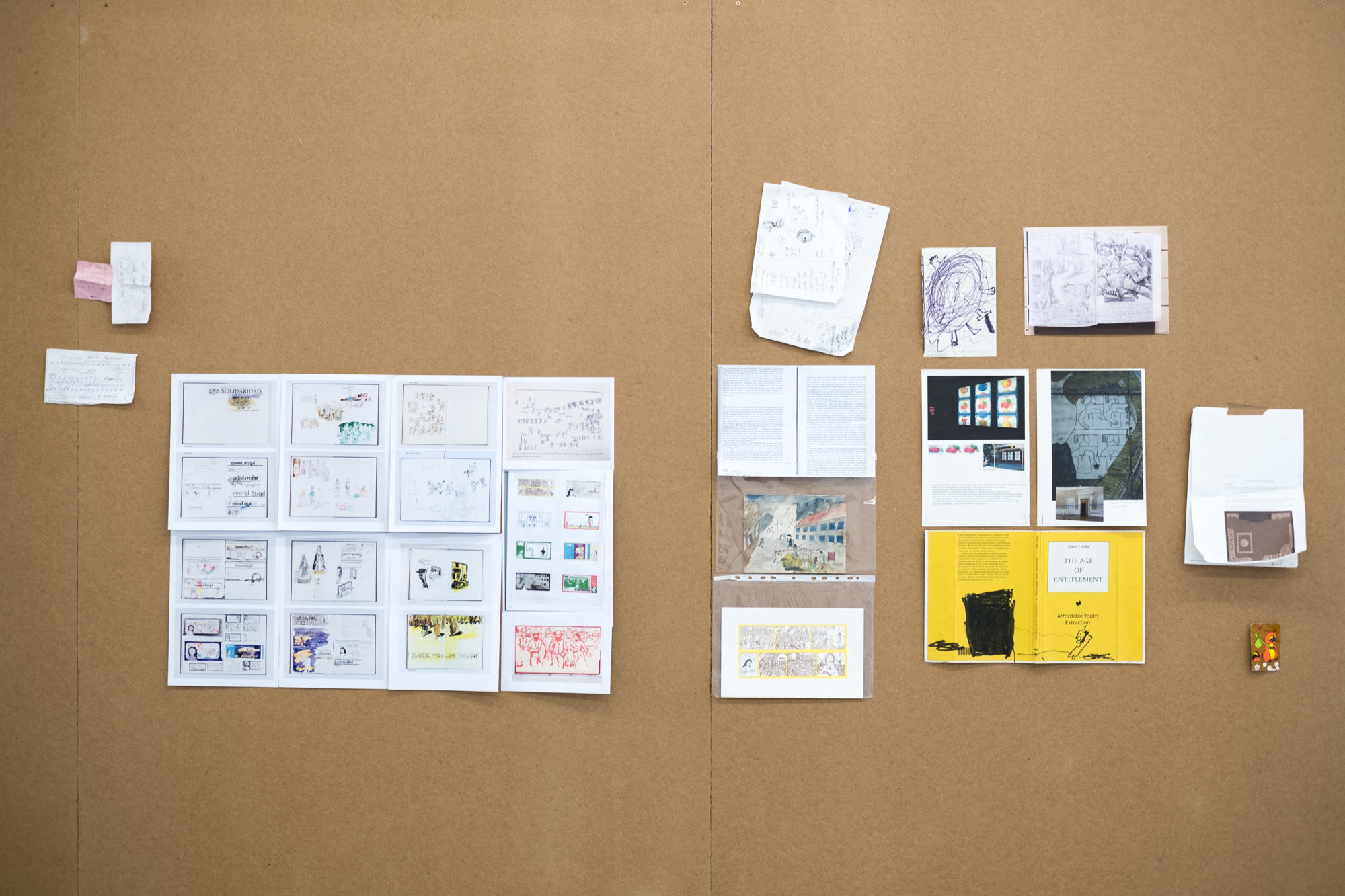 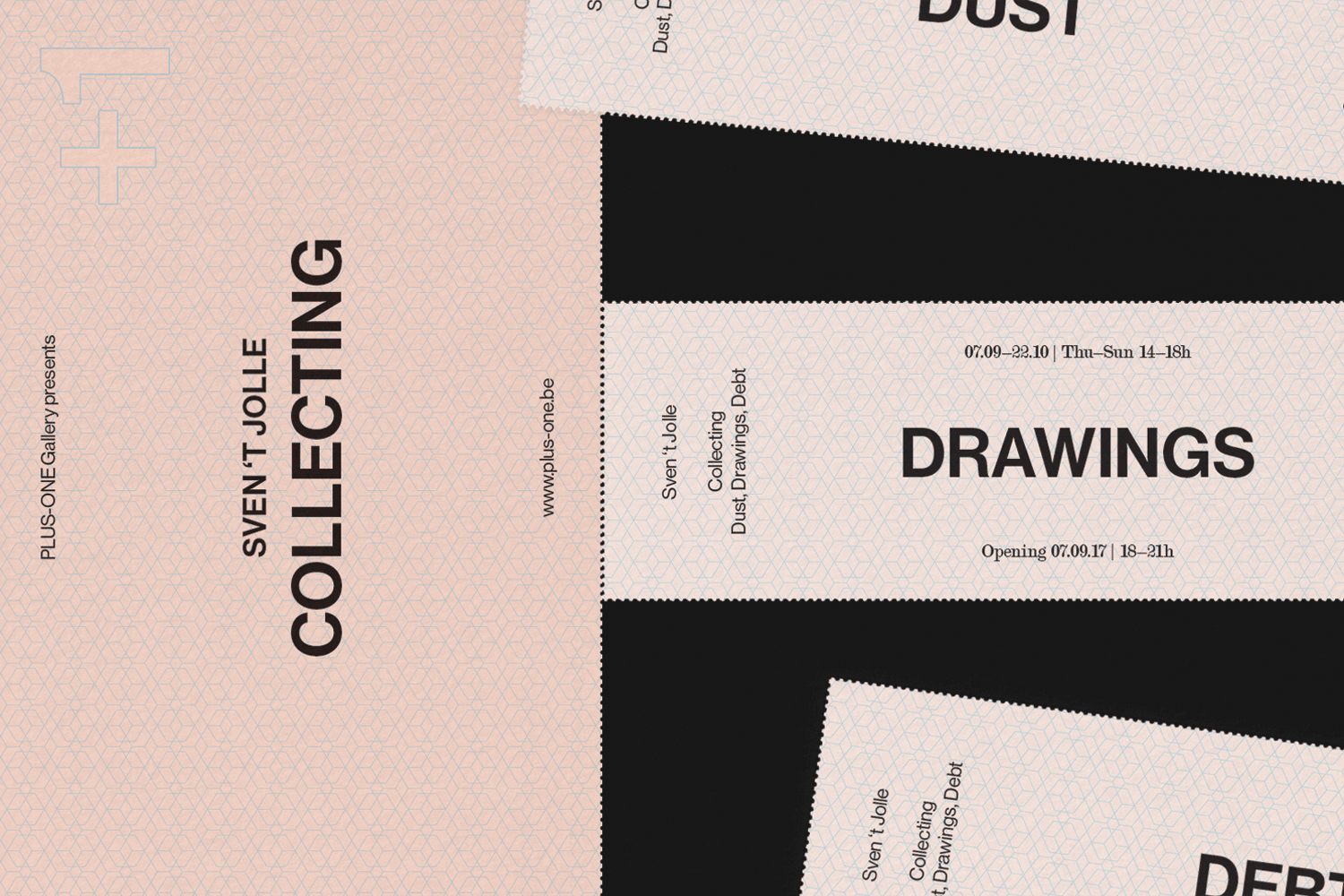 Sven ’t Jolle (°1966, Antwerp) has his own unique way of combining humor and poetry with social commitment and social criticism. His peculiar imagery draws one straight into the work, and references to popular culture like comics and to icons, logos and figures from everyday life make the works recognizable and accessible. At the same time, 't Jolle tries to encourage the observer to think about current conventions and affairs as well as the art scene.

This exhibition is the first part (Collecting Drawings) of the solo project at the gallery called Collecting dust, drawings & debt, which highlights the importance of drawings and sketches in the oeuvre of the Belgian artist. For 't Jolle, drawing is first and foremost a means of communication in which the creative process (the action and experience of drawing itself) is just as important as the end result. His drawings are often a way to convey all sorts of thoughts and ideas. Collecting, ordering and presenting mutual relations by way of drawing is therefore a binding aspect of the exhibition.

Central to the exhibition are the drawings of 't Jolle, who has made 100 sketchbooks in the course of 20 years. His sketches give an insight into his thought and work processes and show how he creates and reworks ideas, shapes, motives or word plays. The collected books are physically present at the gallery, but exceptionally a selection of original drawings is also on display. What's more, thanks to the on line art project 100 Sketchbooks (2017), anyone can now access every page of his sketchbooks at sketchbooks-sventjolle.net/. In this way sketches, though offering an intimate glimpse, are given a public character. The sketchbooks contain newspaper clippings, reproductions of masterpieces from art history, drawings of figures and shapes the artist has noticed or imagined during his travels, and scenes inspired by incidental anecdotes or hard economic facts.

The artist made the series of drawings called Great Regression Epic (2010-2013) with his son Sen between 2010 (when Sen was four years old) and 2013 (eight years old at the time). The drawings, which emanate naive innocence and recognizable spontaneity, are the result of an interplay between father and son, and as such represent the presumed generation conflict, an important theme in the artist's practice. The series depicts battles fought by a little ecclectic army of warriors from all corners of the globe. That way by drawing, the artist also relived a period from his childhood. Regression signifies relapse not only in psychology, but also in economics. After 'Great Depression', the term 'Great Regression' is recently being used as well to describe the deteriorating economical situation and the loss of social achievements most of the working population in the Western world also has been dealing with since the eighties. The artist uses this depressing fact, with a great dose of humor as an incentive for protest, in the Great Depression Coloring Book (2017), in which he collects a number of drawings which (as a comment on the 'meditative' colouring books for adults) can keep us occupied for a while. The series contains a wide variety of drawings, icons of his works, that stress the timelessness as well as actuality of the problem.

Le temp des cerises (2011), a reference to the eponymous love song related to the first Parisian popular uprising in 1871, was initially an art project for an Australian bank. 't Jolle made the triptych by colouring checks on checkered paper and shows a winning cherry combination. The humorous quip of linking a drawing of a casino game to a solidarity song and using this for a bank during Occupy Wall Street is vintage 't Jolle. Jackpot!

With ’Collecting Debt’ (2017), the artist highlights a different way of collecting: the collecting of debt. He does not specify whether this is from the perspective of the creditor or the debtor. The work uses a classic wallpaper pattern, like that of interiors in Tintin comics or the walls in the Oval Room of the White House and reworks them into a composition that invokes the suggestion of a(n) (art) collection that has been confiscated.