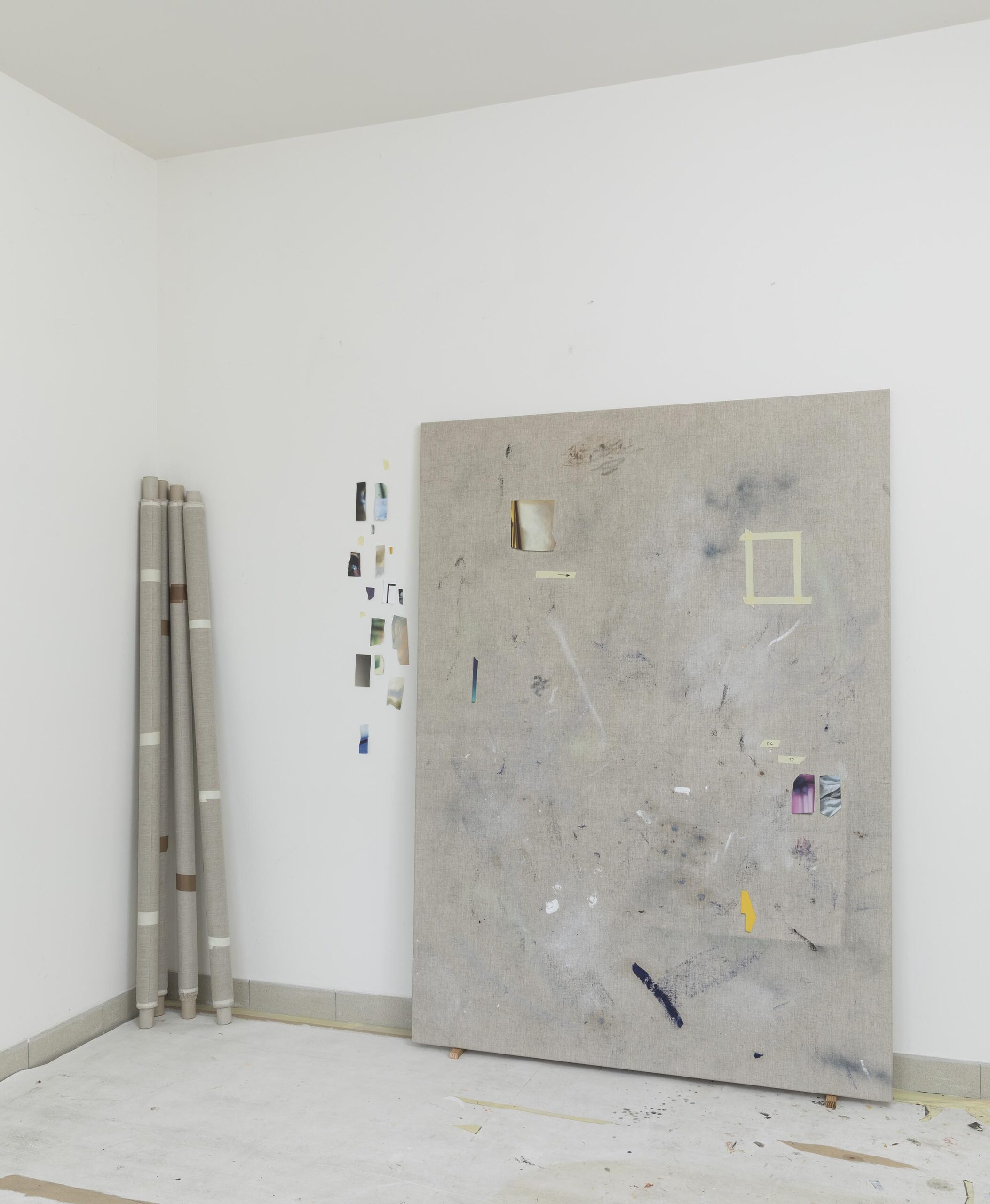 After breakfast, back at his workstation, he scans the screen with his eyes. The image is sharp as a tack, his eyes rove over the paintings as far as his gaze can stretch, as if reproducing them with his stare. And yet he feels he’s not close enough, because he’s not always sure of what he’s seeing. His immediate perception, in each case, is of an aesthetic composition. On the one hand, they consist of all manner of colour splotches and paint residues (marks, strokes, spatters, stripes) that seem to have been left behind unintentionally on (or found their own way onto) a semi-unprepared canvas. They are reminiscent of the work of a painter in his studio, except without there actually being a figure resulting from that work. On the other hand, there are meticulously painted areas that reproduce details from existing paintings, yet which have intentionally been made scarcely recognisable if at all (Vermeer, Matisse, De Keyser, someone?) in order to draw our attention chiefly to the traditional power of painting to evoke, with nothing more than paint and colour, an illusion of movement, space and depth within a static and flat framework.

What fascinates him about these little pieces of tape, he muses, is not their nature as a trompe l’oeil, but the fact that they are set about abandoning their illusory nature. Differently to the copied fragments of paintings and newspapers, which in all their colourful abstraction evoke the suggestion of depth and sometimes even have the air of a landscape to them, these pieces of tape are virtually separating from their background, jumping off of it. He knows that this is precisely the earmark of a trompe l’oeil, yet something else seems to be at play here, too. There is no doubt that they are tromp l’oeils, and yet their illusion disembeds itself from the background that is so necessary to their illusory effect. ‘We cannot, strictly speaking, watch ourselves having an illusion’, wrote Gombrich in Art and Illusion. Either you are captivated by an illusion or it is exposed and you become aware of it. But here this impossibility seems possible, as contrary as that may sound. The painted pieces of tape peel themselves off the canvas, to become what they are decidedly not, i.e. real pieces of tape, and while he sees that and is aware of their illusion, they temporarily turn into ‘sp(l)itting images’, as it were. Or, at least, that’s how he would name the phenomenon: unlike an exact likeness or ‘spitting image’, these are images that are neither real nor illusory, yet momentarily exhibit both qualities. Emerging with all the ambiguity of the imaginary, derealising the real while realising its unreality. Imagination and reality are, for a moment, indistinguishable, and open up a reflective and intermediary space of sheer resemblance, with the fiction of the contrived painting as its medium.

He has to smile when he reflects that all the painter’s works could be described in this way, as sp(l)itting images, variations on a similar theme, based on uncanny likeness. But when he looks again, there is something that causes his smile to subside, something he has often experienced in the painter’s studio, alone or among other viewers. The discovery of a trompe l’oeil has the propensity to elicit a smile. It is as if you feel caught out in your gullibility, a somewhat embarrassing, personal deficiency in your capacity to see things objectively. Laughing serves to neutralize the feeling. It is the moment that one’s understanding resolves: an insight is shared, a wink received. But then comes the moment that the laughter intensifies, as if everything is part of the same joke. That roll in the corner with tape on it: is that a finished painting? That canvas on the wall with the clippings beside it: real or painted? And that intercom by the door, haha: that’s real, no doubt. But the door frame itself? Can we actually still leave? In this way it suddenly begins to haunt you. Not because you take the joke seriously, but because everything in the space becomes the subject of an endless irony, including the space itself. Because the imaginative game being played here seems to infringe on all of reality. And because, in light of that irony, the way the painter continues this game from work to work – even exhibiting his studio as a trompe l’oeil – slowly starts to resemble an existential quest: painting in search of something that is ultimately real. Or, no, it’s exactly the opposite: painting in search of the ultimate illusion, something the painter can continue to believe in.