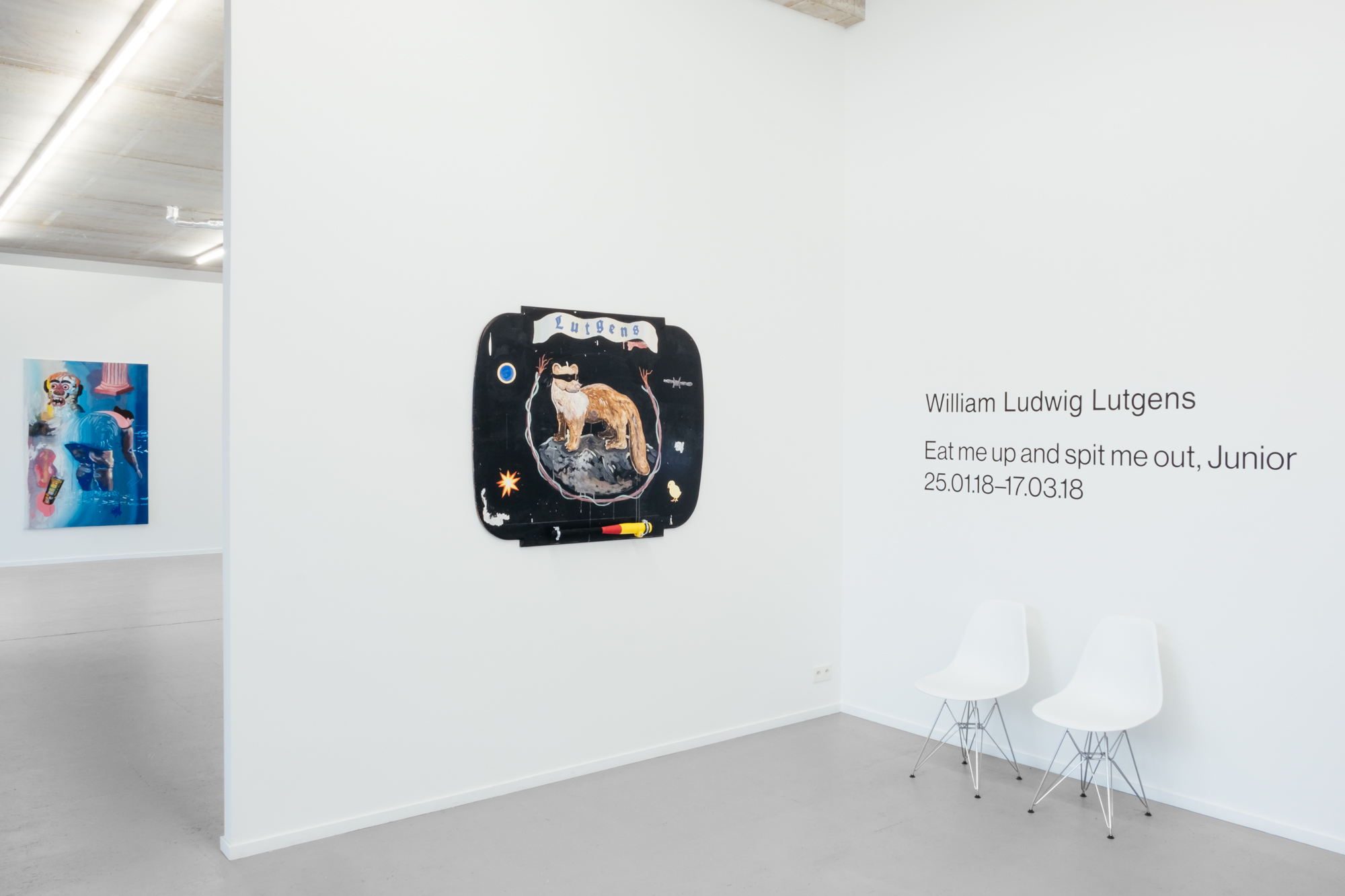 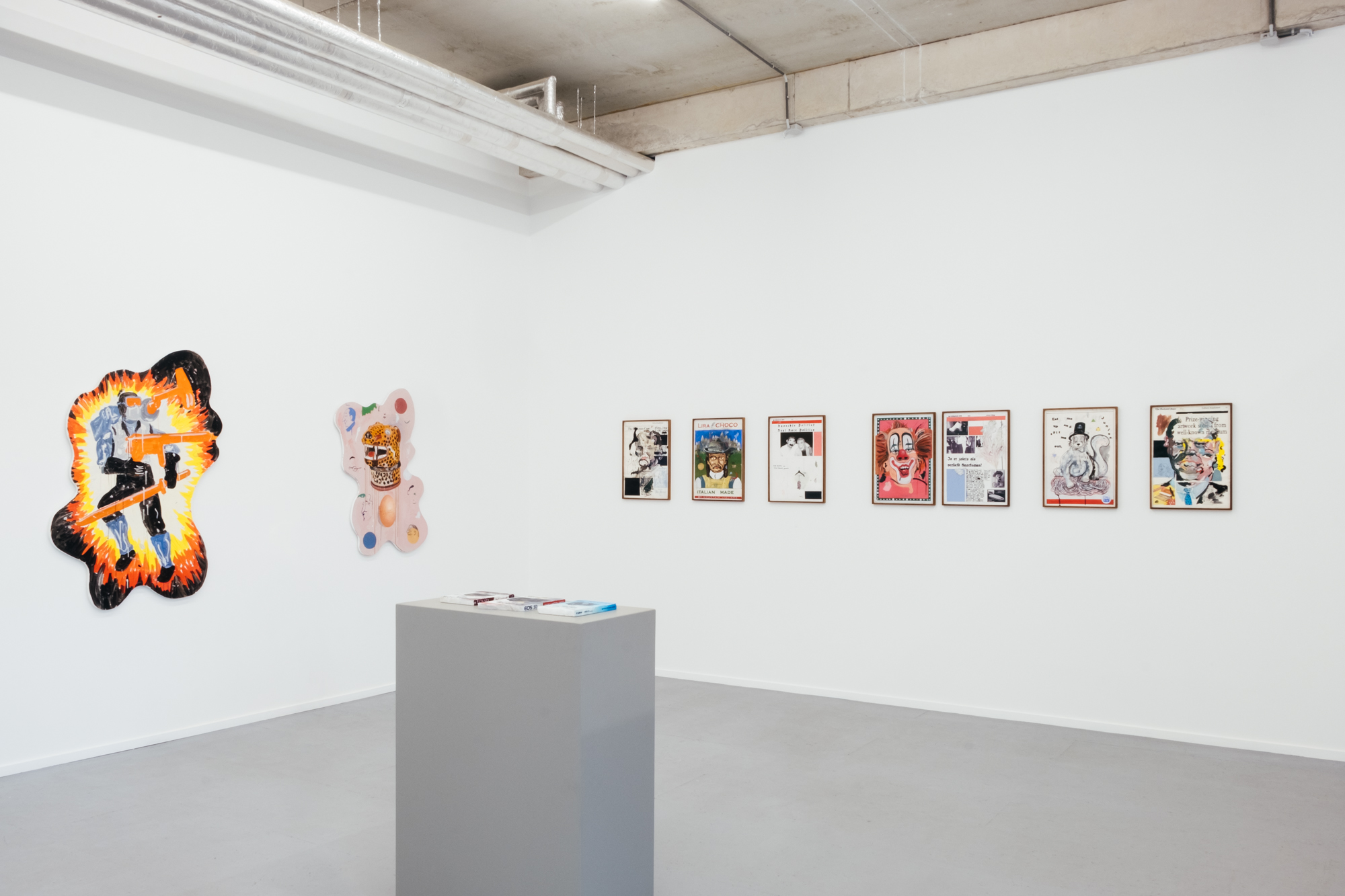 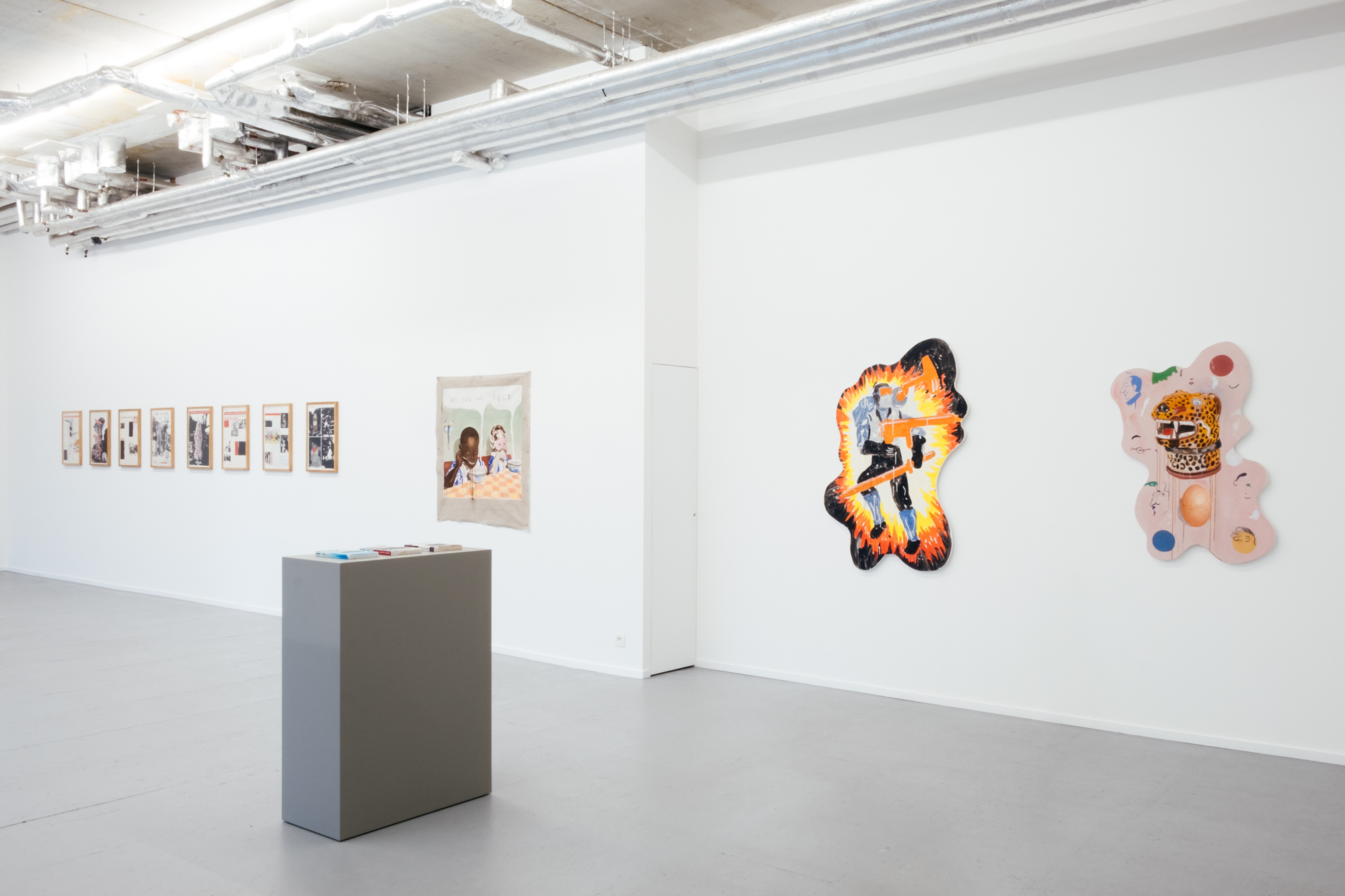 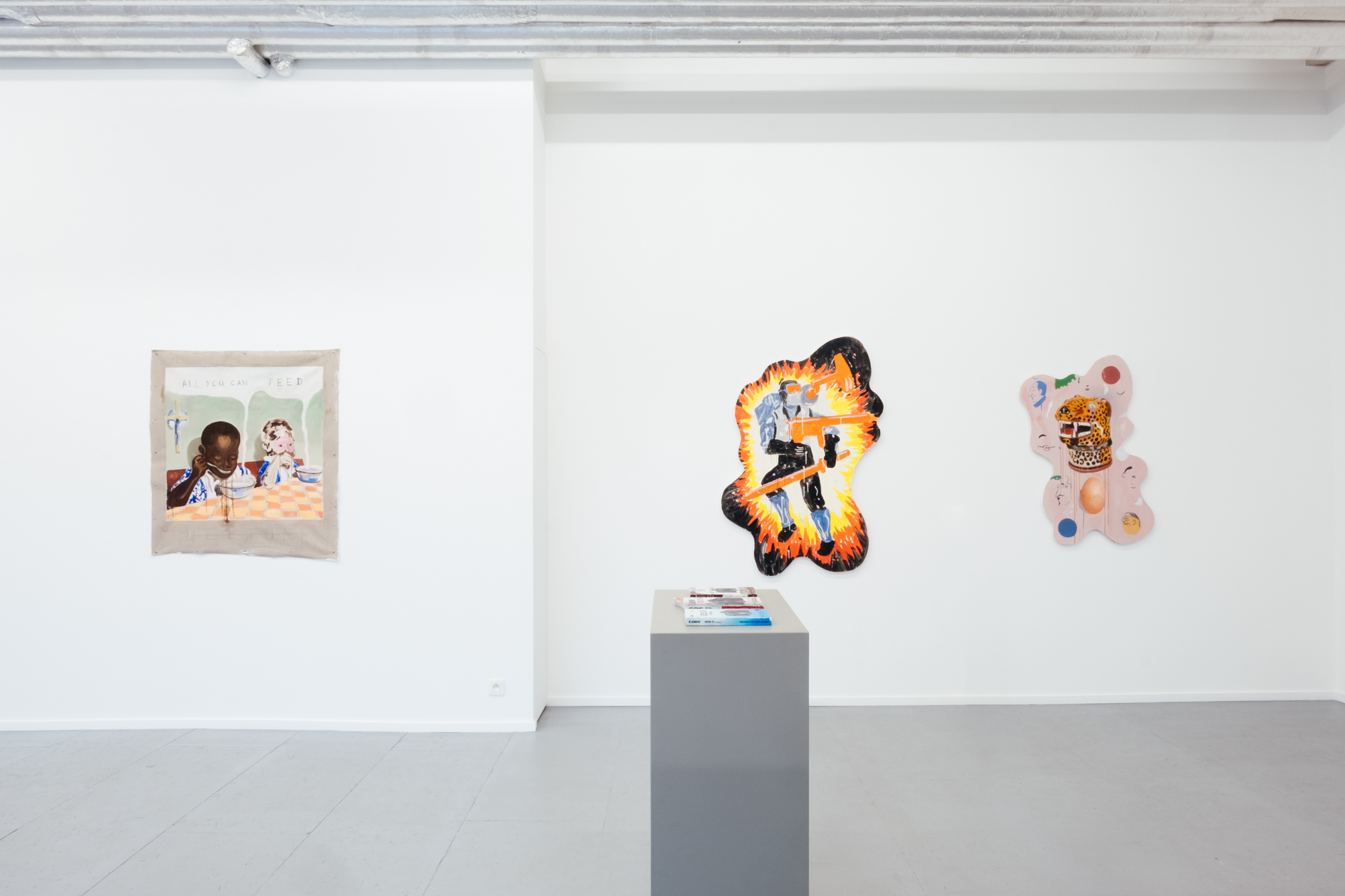 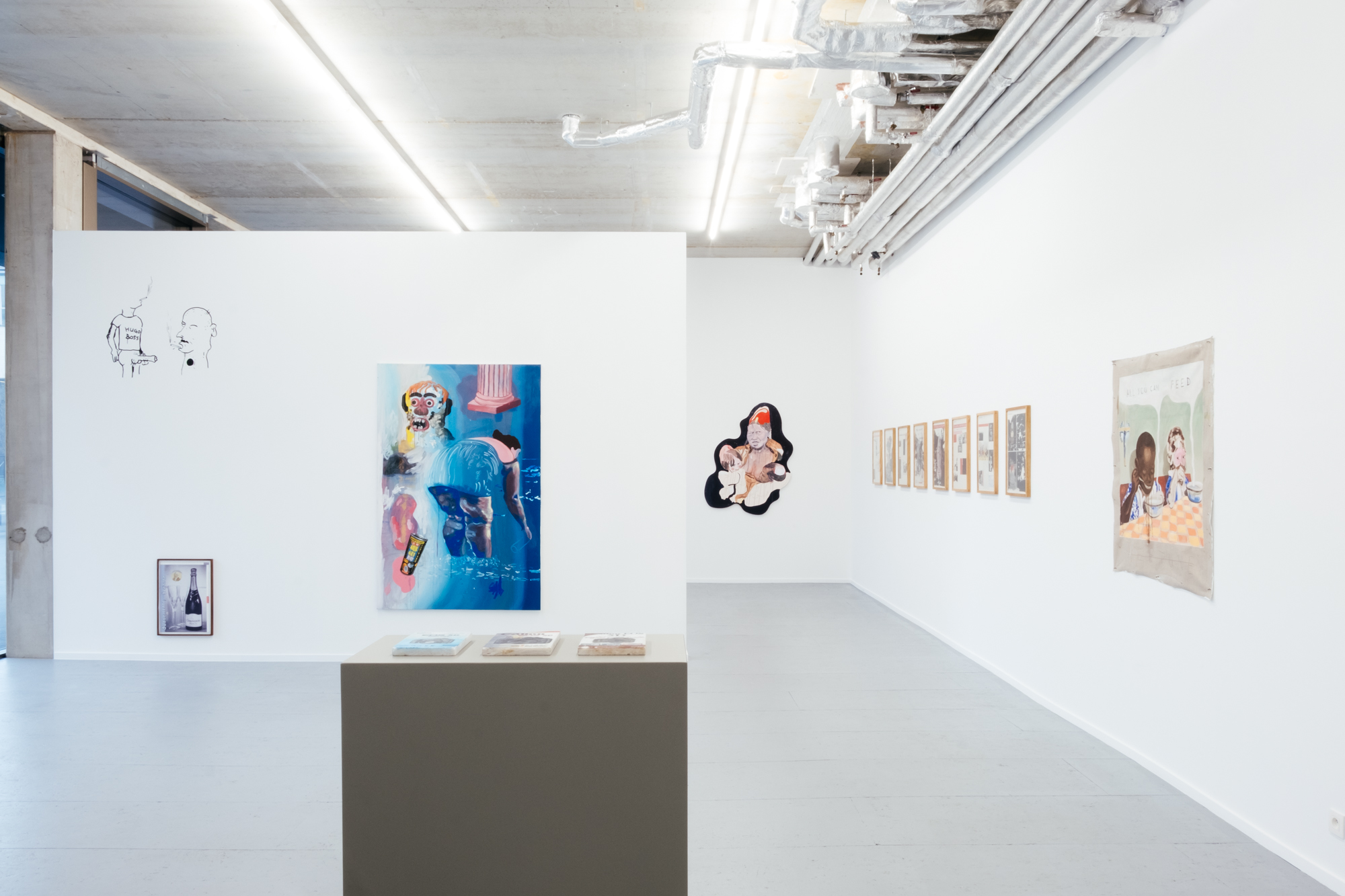 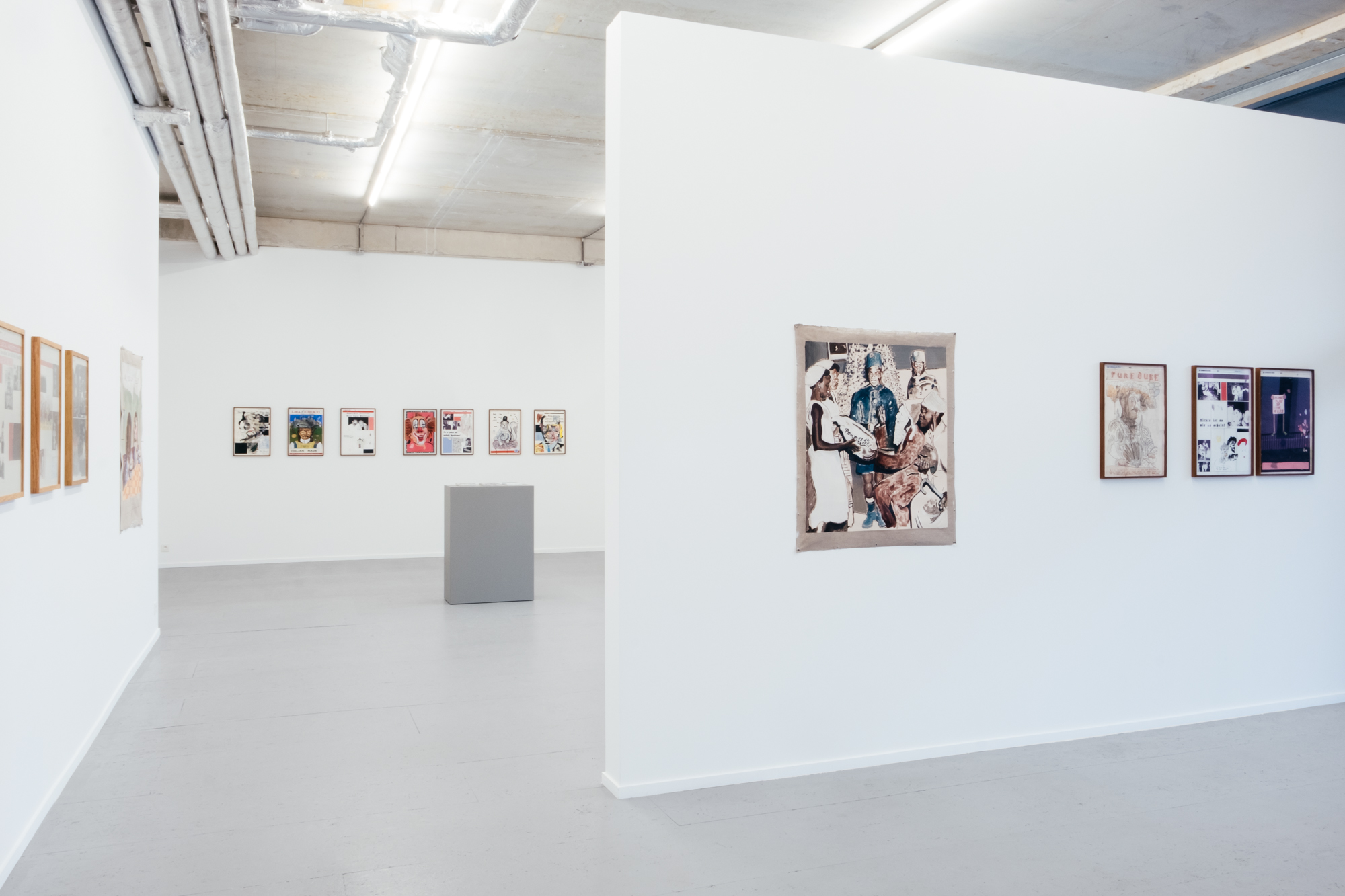 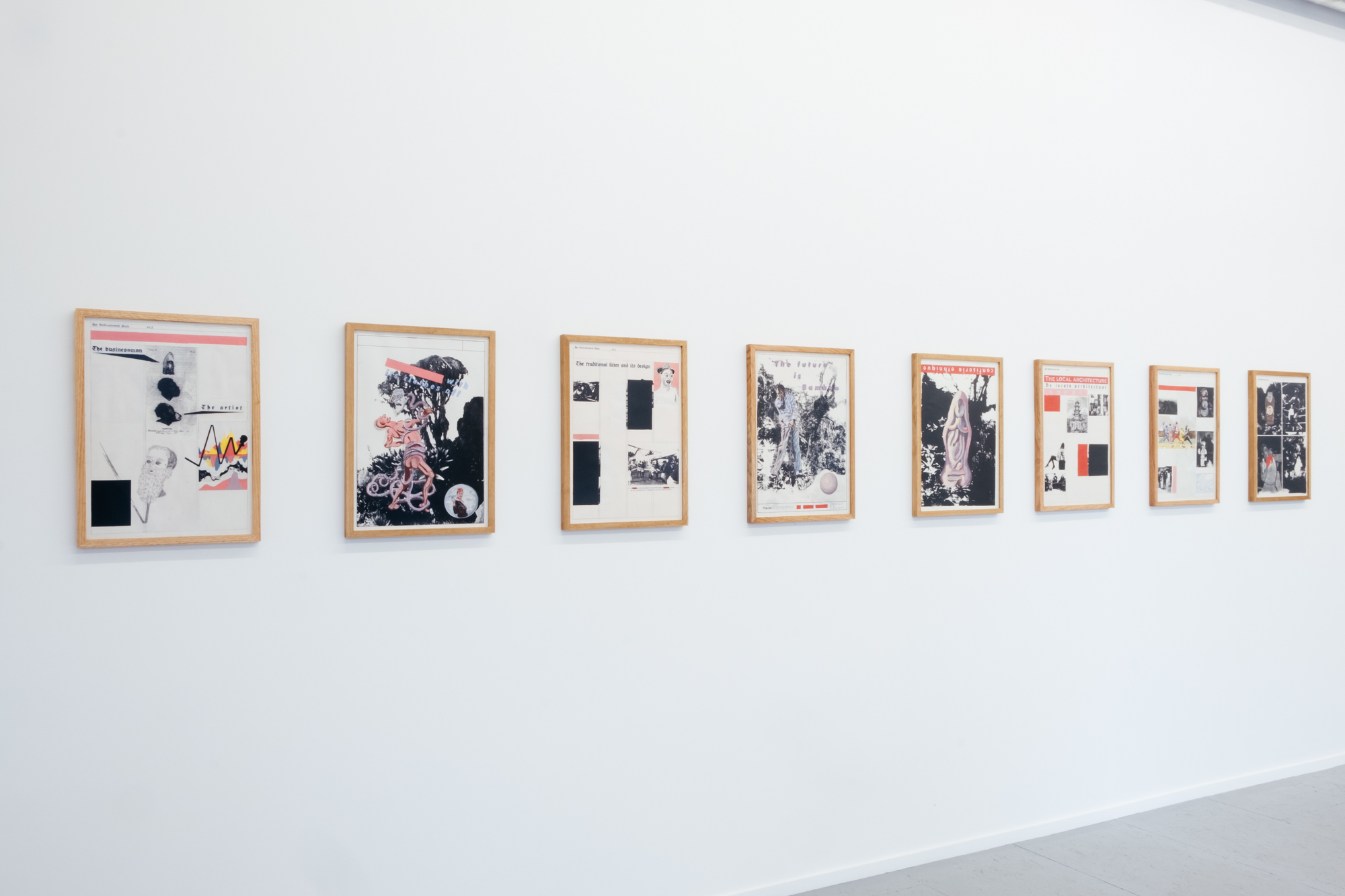 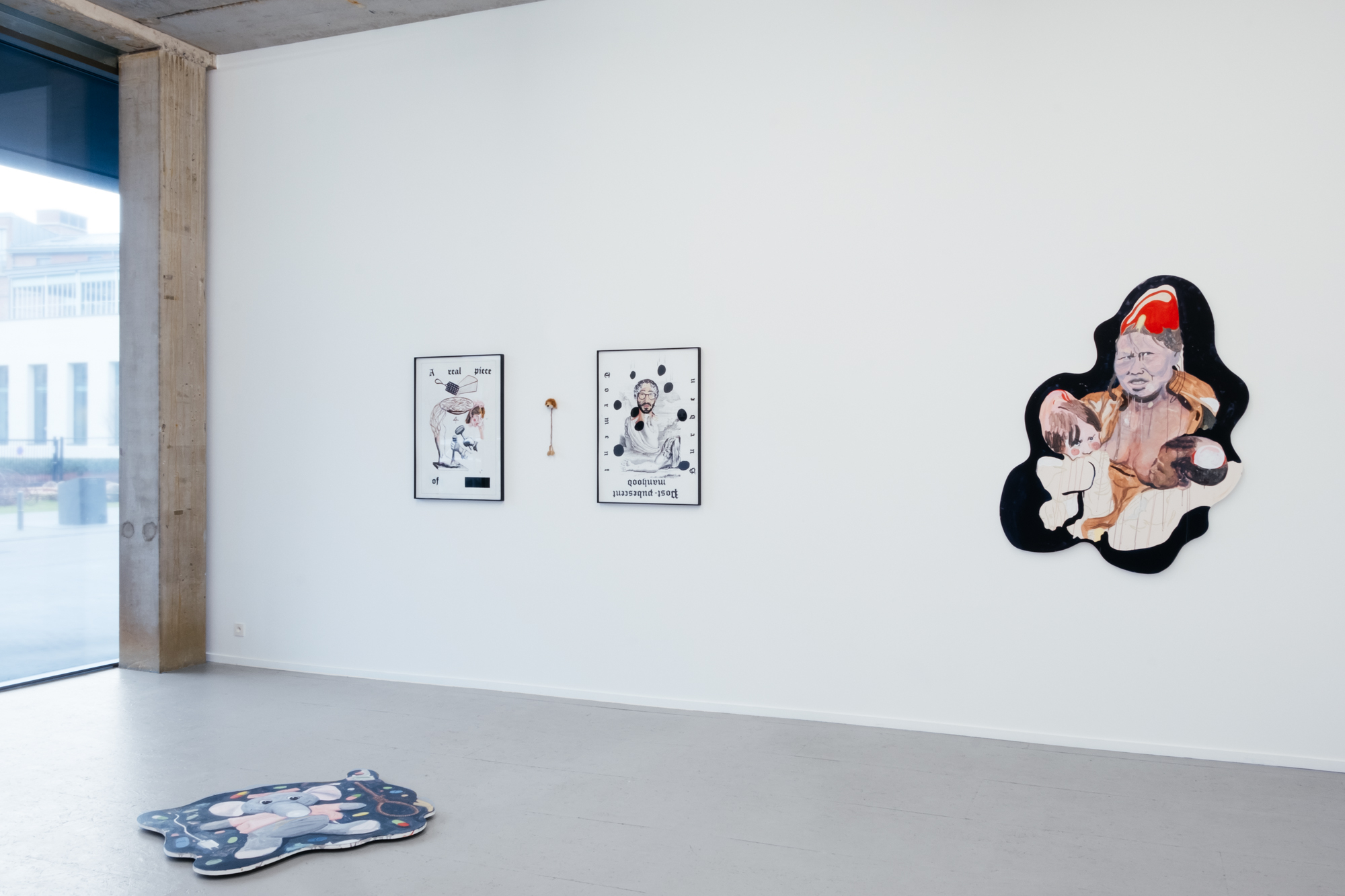 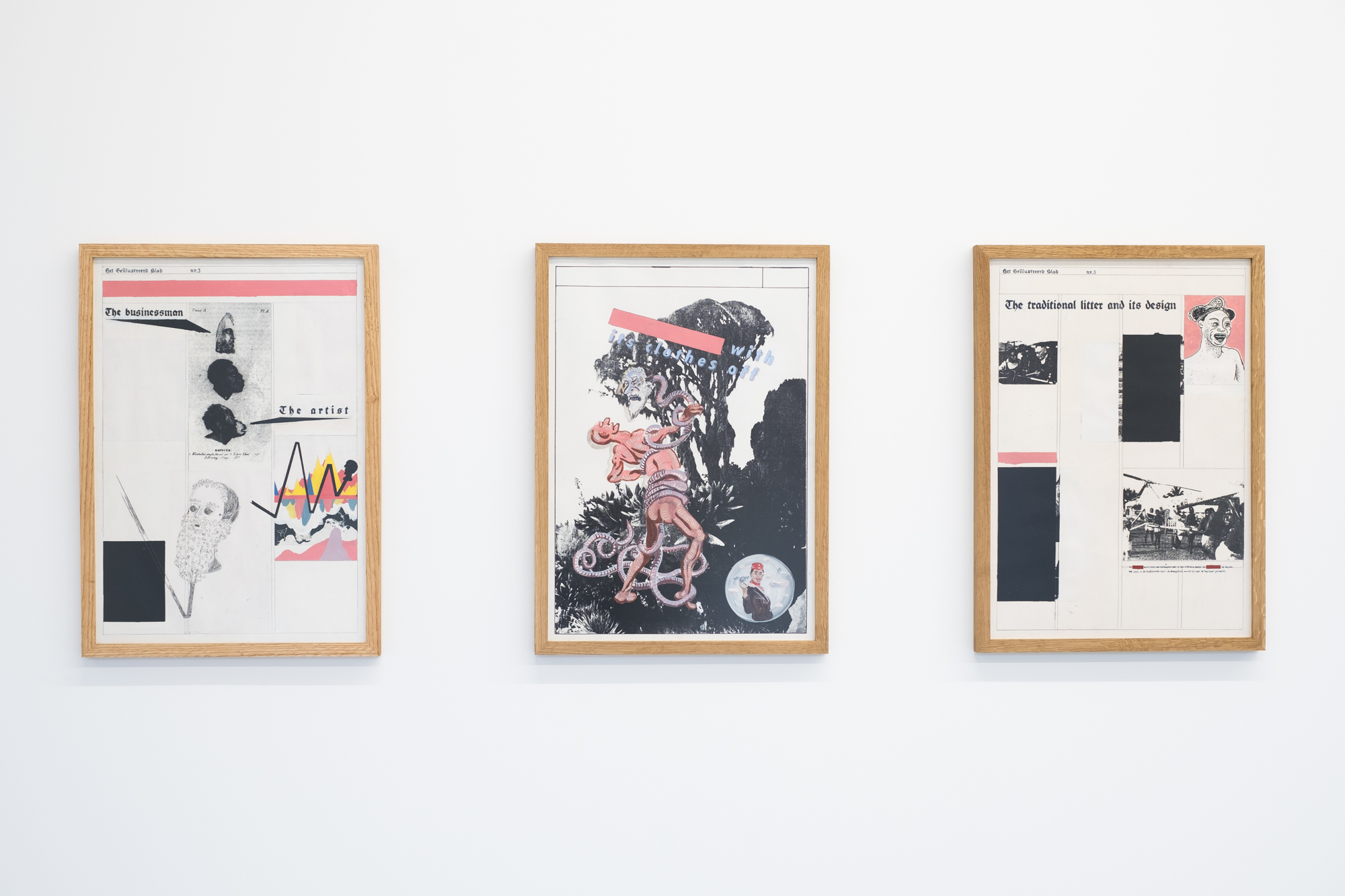 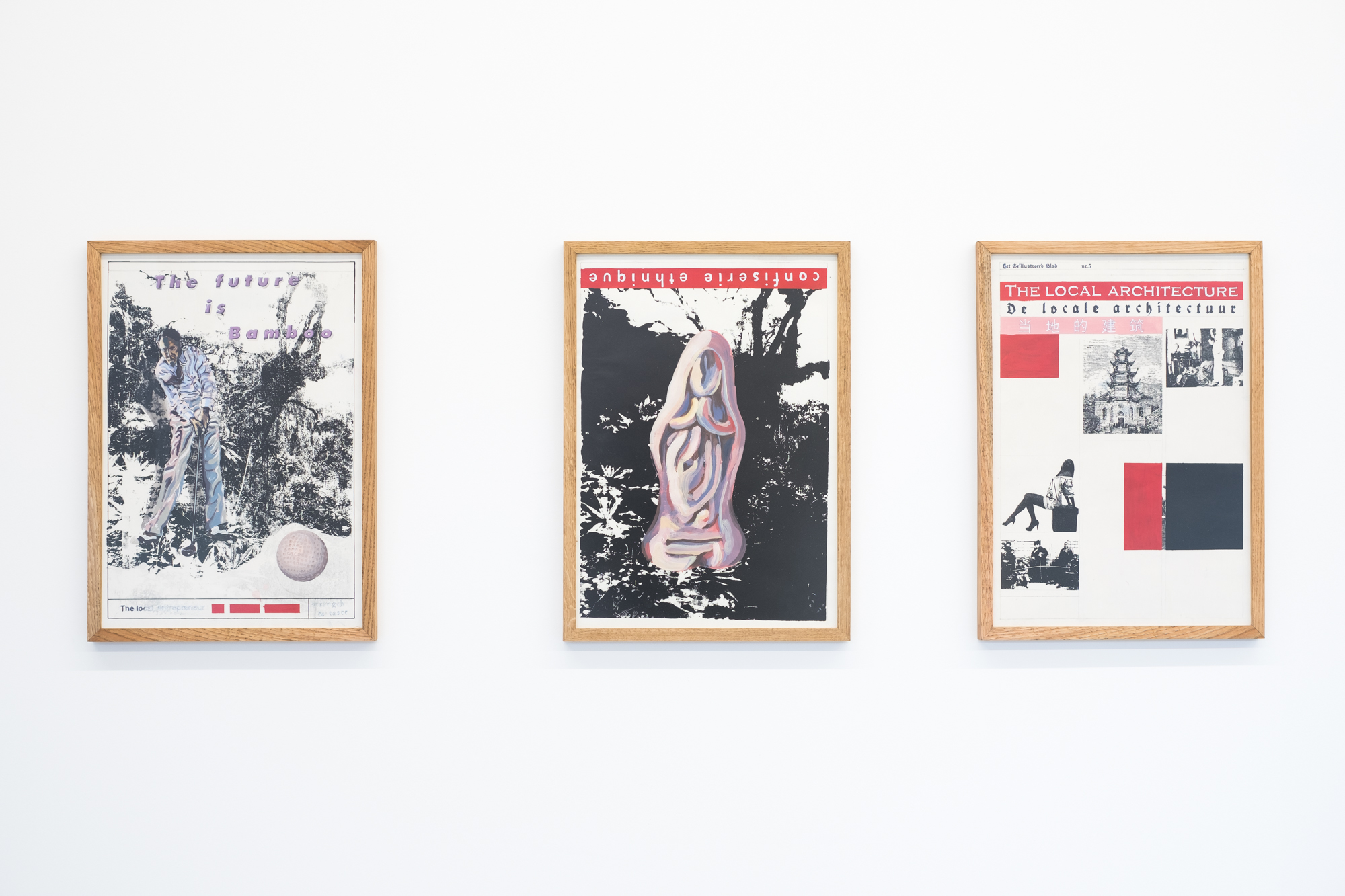 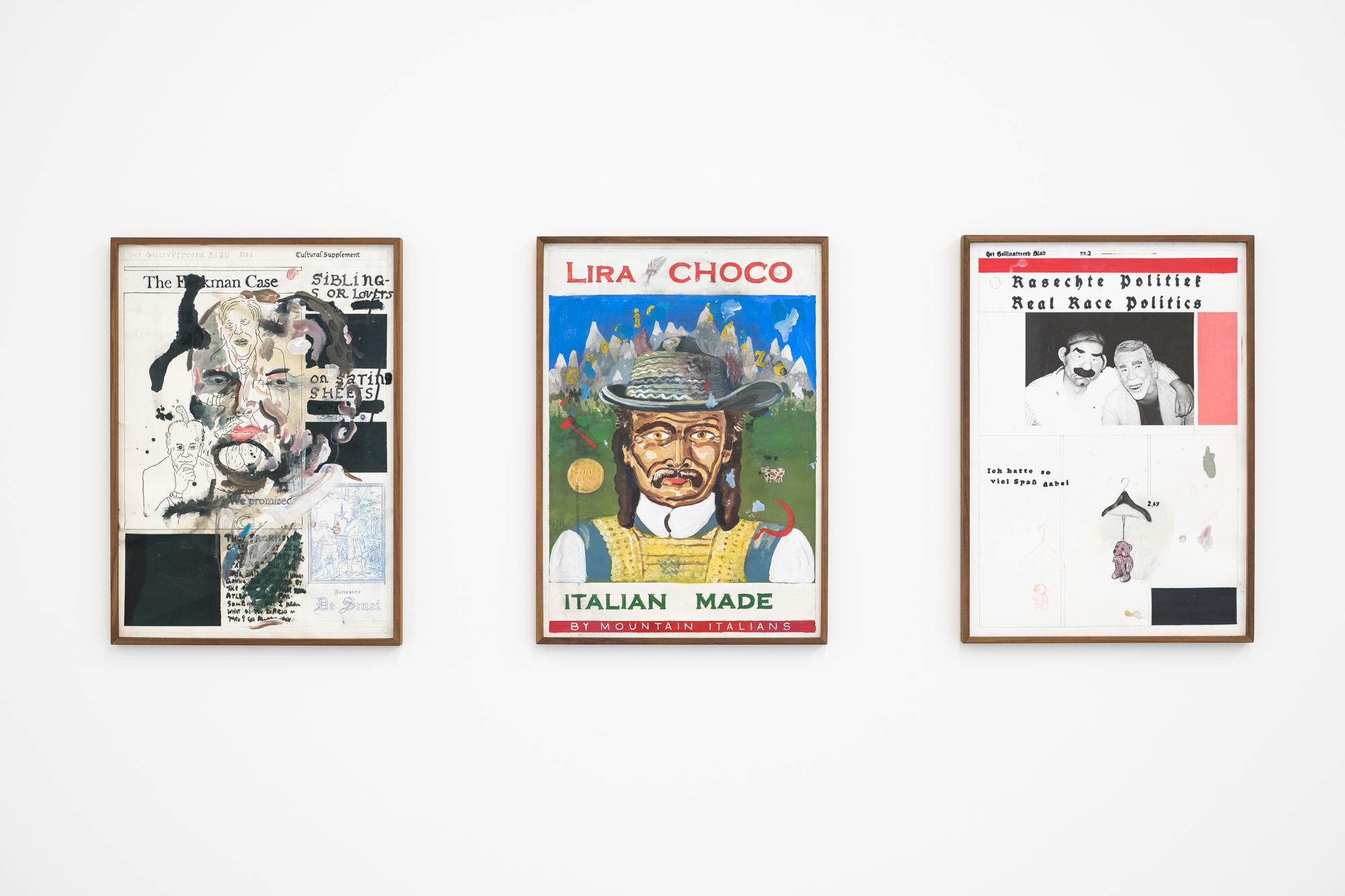 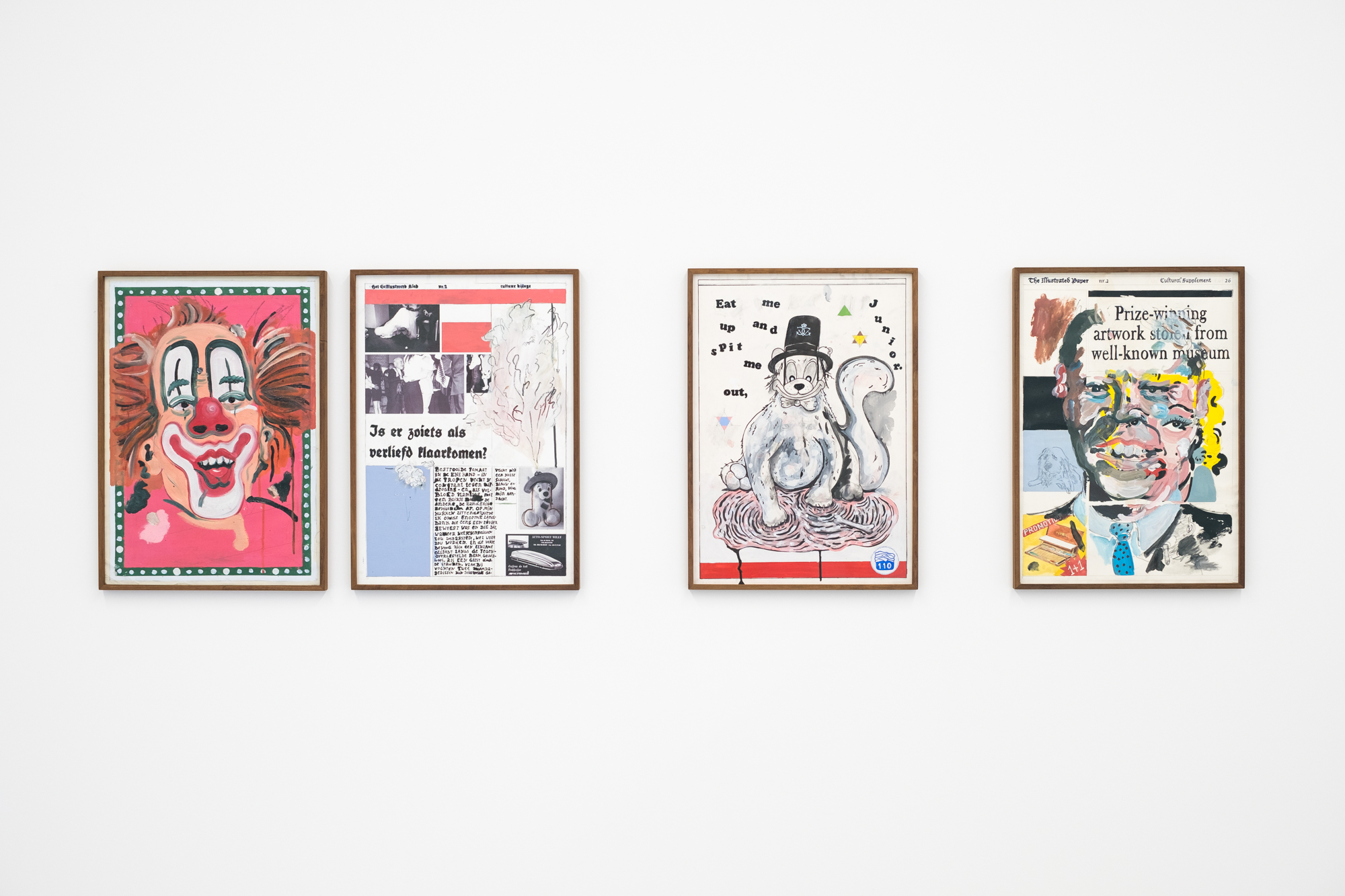 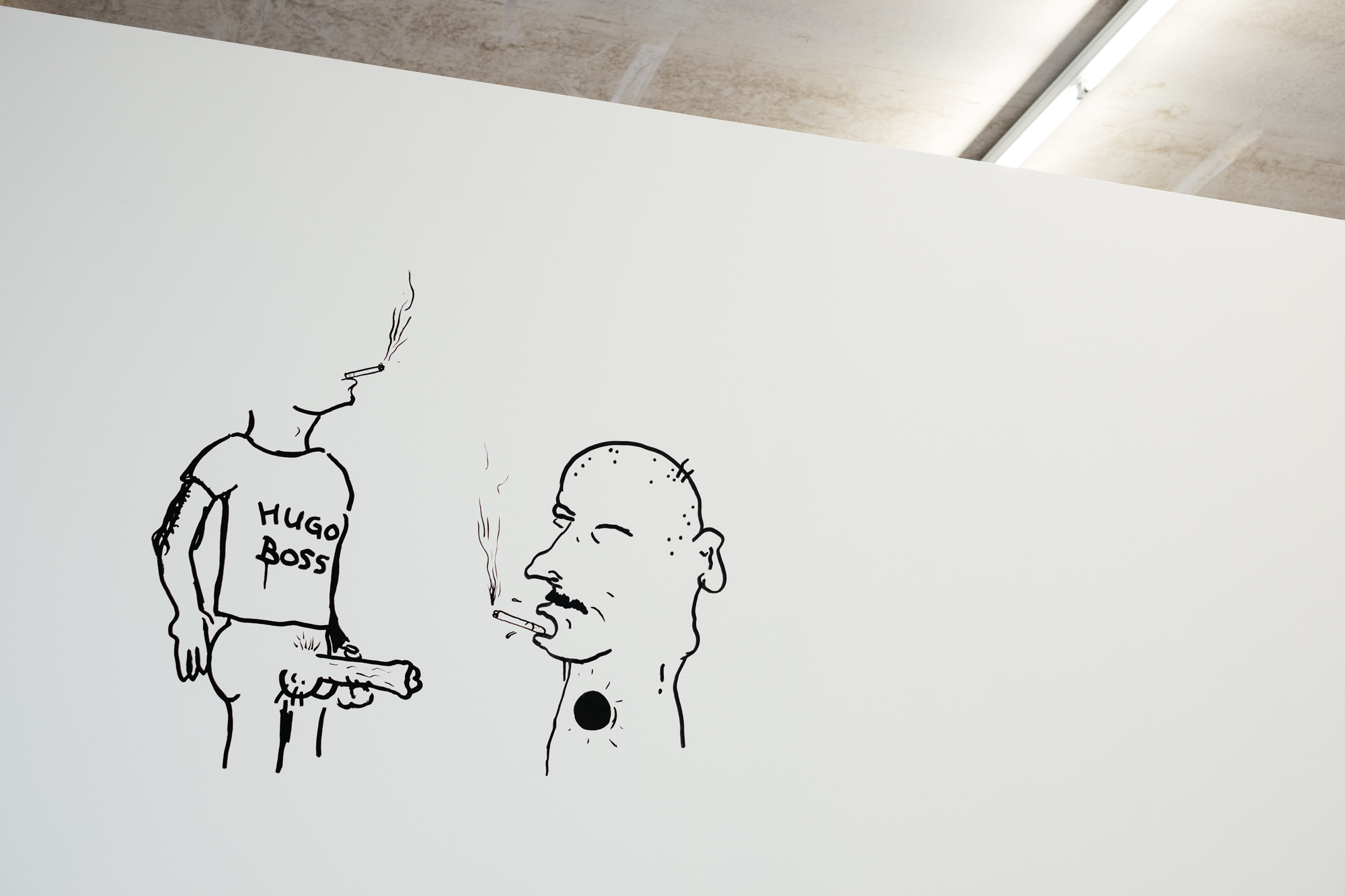 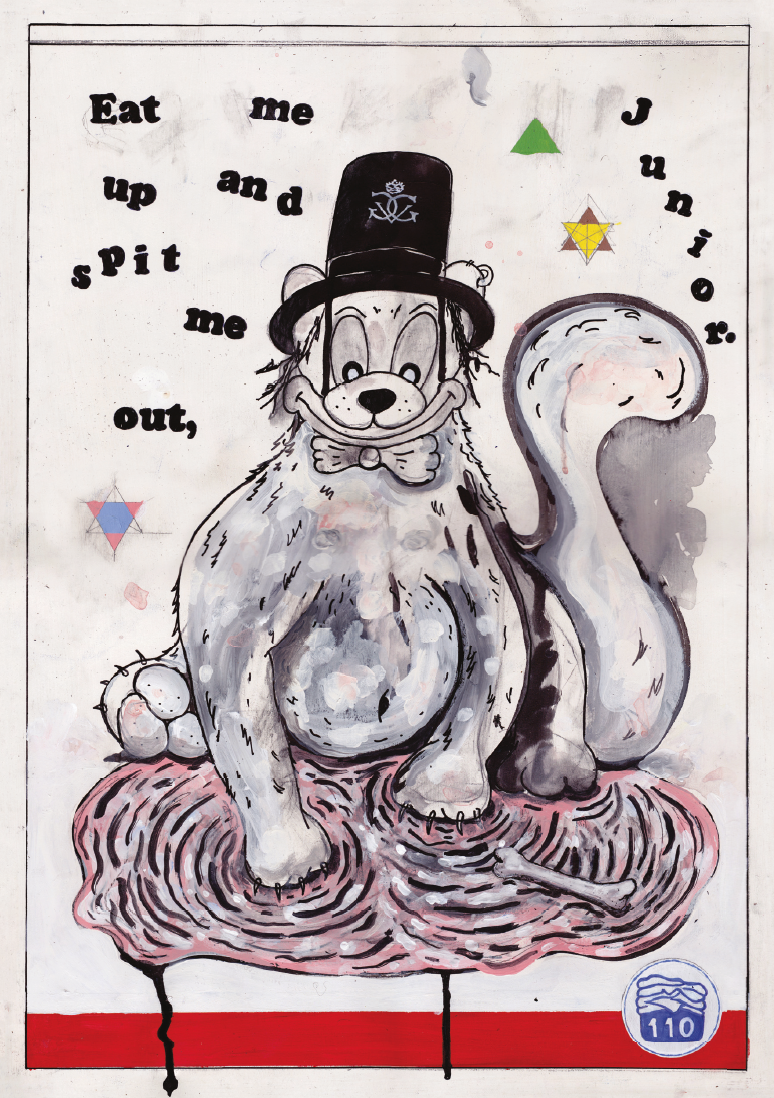 He absorbs an abundance of images and impressions and then ‘vomits’ them into his works. This is how William Ludwig Lutgens (°1991) describes his own art practice. His paintings and drawings have a chaotic character because of their ‘trashy’, almost anarchistic style. However, his artistic strength is in his intertwining and layering of different styles and influences. Lutgens skilfully combines neodada-inspired collage techniques and cartoonesque drawing with an often expressive use of paint, and socially critical, politically charged content with an overtone of dark humour.

All of Lutgens’ motivations come together in one of his key pieces; ‘Het Geïllustreerd Blad’ (‘The Illustrated Paper’) a ‘politically incorrect’ newspaper - the second edition of which will be launched during his solo exhibition at Plus One Gallery. The first edition covered an amalgam of subjects, from colonialism and ecology to economy and health. Overall, it is mainly a critical pastiche of the format and content of regular newspapers, and more specifically, it questions the integrity and neutrality (or lack thereof) of the media.

The second edition of ‘Het Geïllustreerd Blad’ is inspired by publicitary brochures and will have consumption, both of commerical products and of images, as its overarching theme. Lutgens questions our society, which is ruled by marketing and cloaked in an excess of perfect-yet-fake imagery. Related to that is his satirical perspective on the art world, which is equally more and more governed by marketing. His works also make the viewer their subject: how do we consume images, and specifically art? Lutgens subtly steers the viewer’s reading of his work, without giving any definite answers.

Lutgens is at all times inspired by everything that happens around him - like a sponge he effortlessly absorbs impressions of situations ranging from his brother’s wedding to winning the Eeckman Art Prize, and spits them out in satirical images. Finding himself between graduating from HISK, receiving a lot of positive attention and preparing a solo show, led to most of the new works on view at Plus One Gallery. Departing from the comparison of his art practice to bulimia, he is recently working on a series of ‘pukes’. The whimsical shapes of the wooden panels are cut from previous works, which the artist has repainted with white, but still allowing the past texture some visibility. This series zooms in on the idea of unlimited consumption and the absurd way the artist ‘throws up’ this overload of impressions in his work.

Humour is a key aspect regarding Lutgens’ works. He takes everything with a grain of salt. As reality becomes harder to distinguish from all things fake, we might as well take it lightly. This lightness is especially present in his colours and occasionaly naive drawing style. Content-wise, however, the viewer is left with a bitter aftertaste. This is where Lutgens is influenced by the genre of cartoons: he makes humouristic pointes, but never without a - sometimes sublte, often blunt - spot of criticism. However, in an art scene where politically critical art is not a rarity, his light-hearted (non-pessimistic) commentary is refreshing.

Visual artist William Ludwig Lutgens lives and works in Antwerp and Ghent, where he recently graduated from the post-academic programme at the HISK (Higher Institute of Fine Arts). In 2015, Lutgens graduated in a Master of Research in Art and Design (Manama), after doing a Master in Illustration and Graphic Design at St Lucas School of Arts Antwerp. In 2017 Lutgens won the Front Line - Lyra prize at Drawing Room Madrid, The Eeckman Art Prize at Art On Paper in Bozar and The Boghossian Foundation' 2nd prize at Art Contest