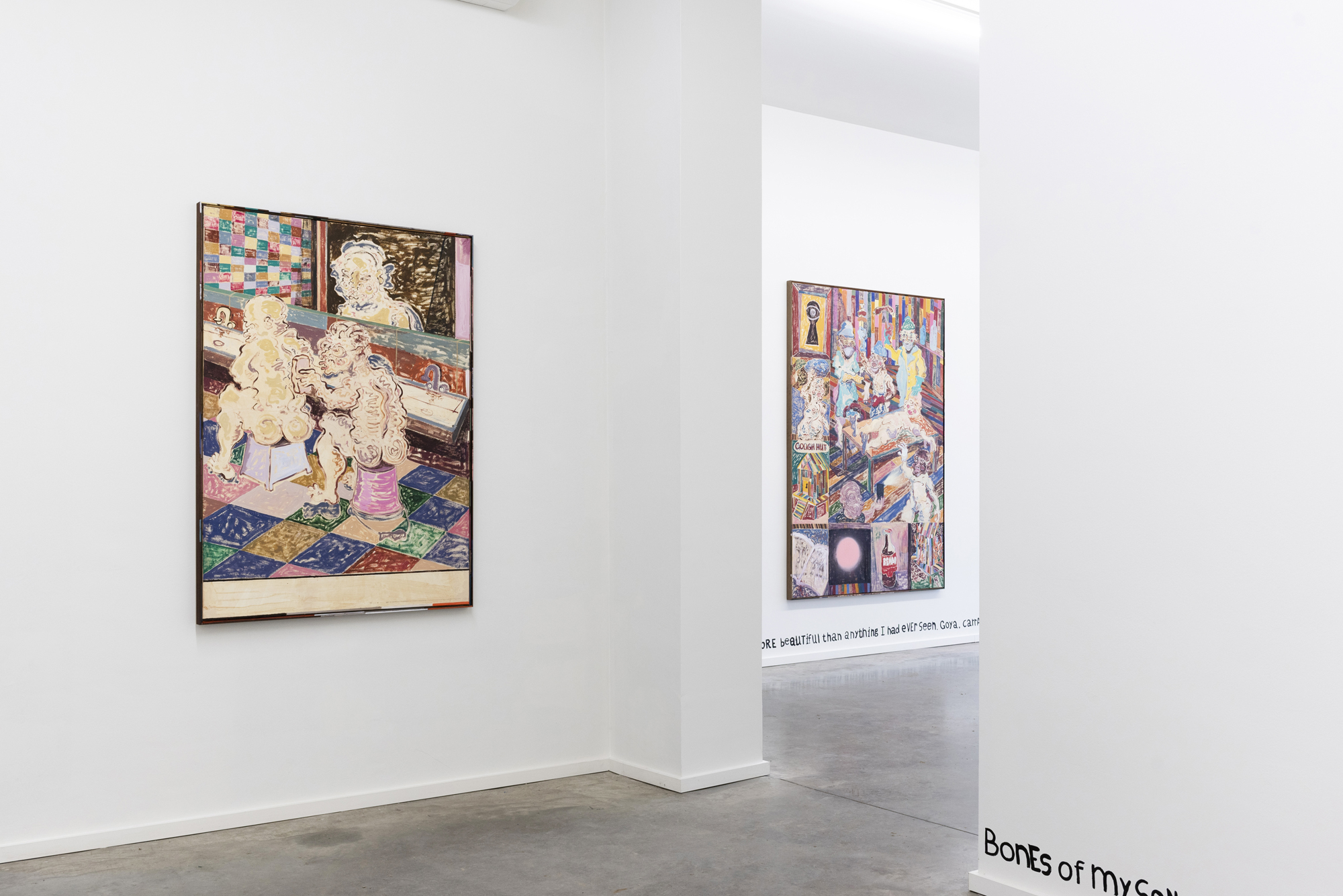 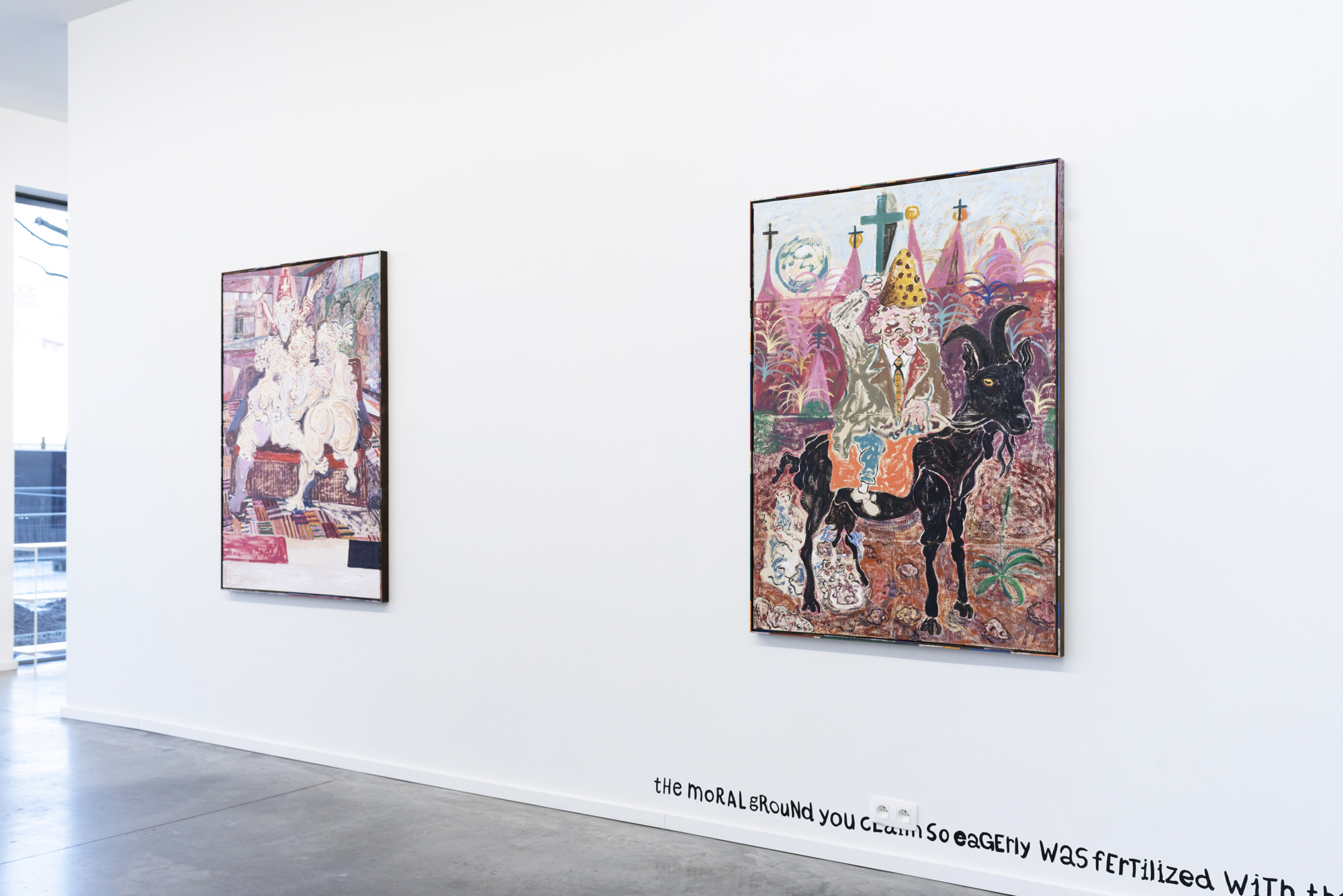 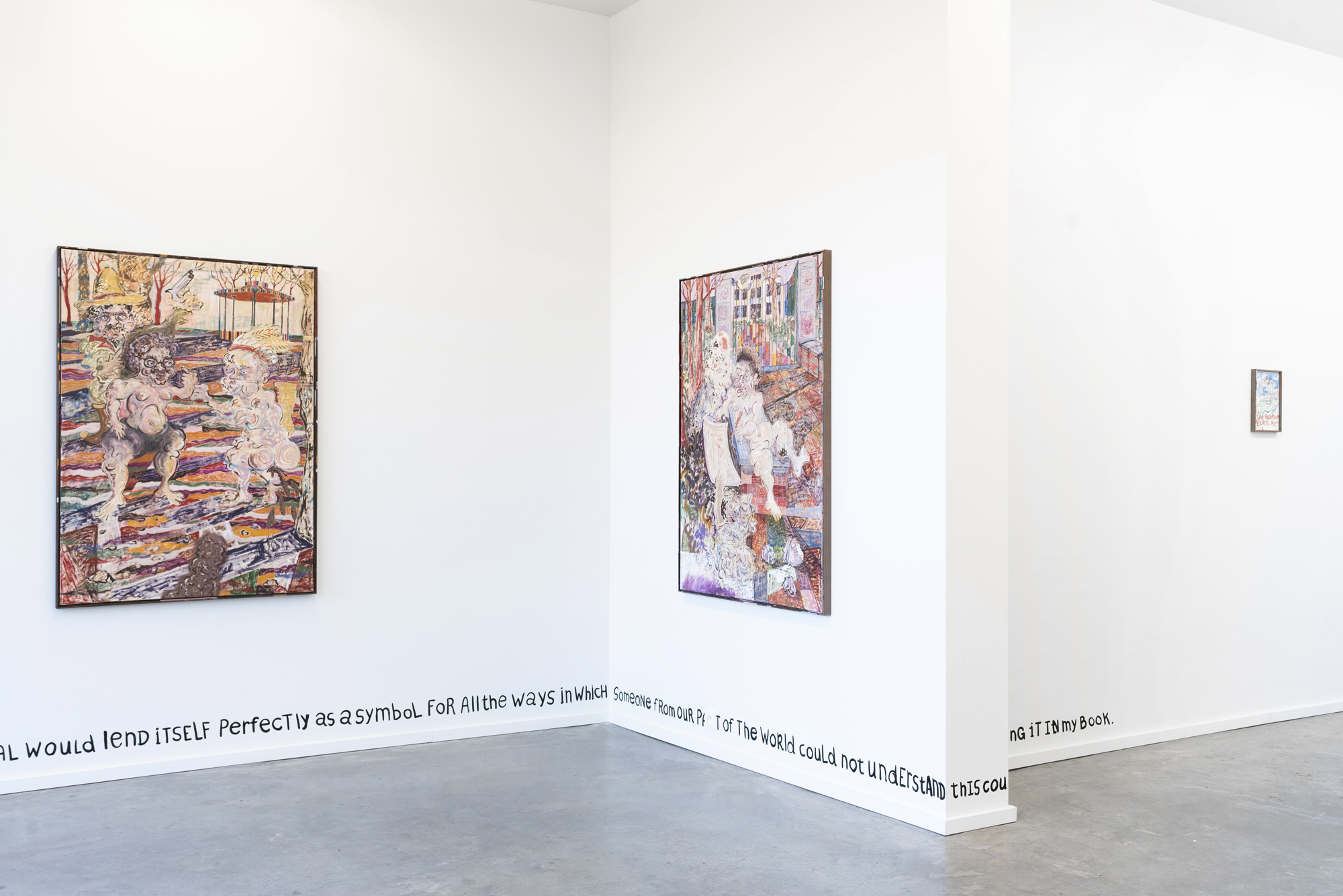 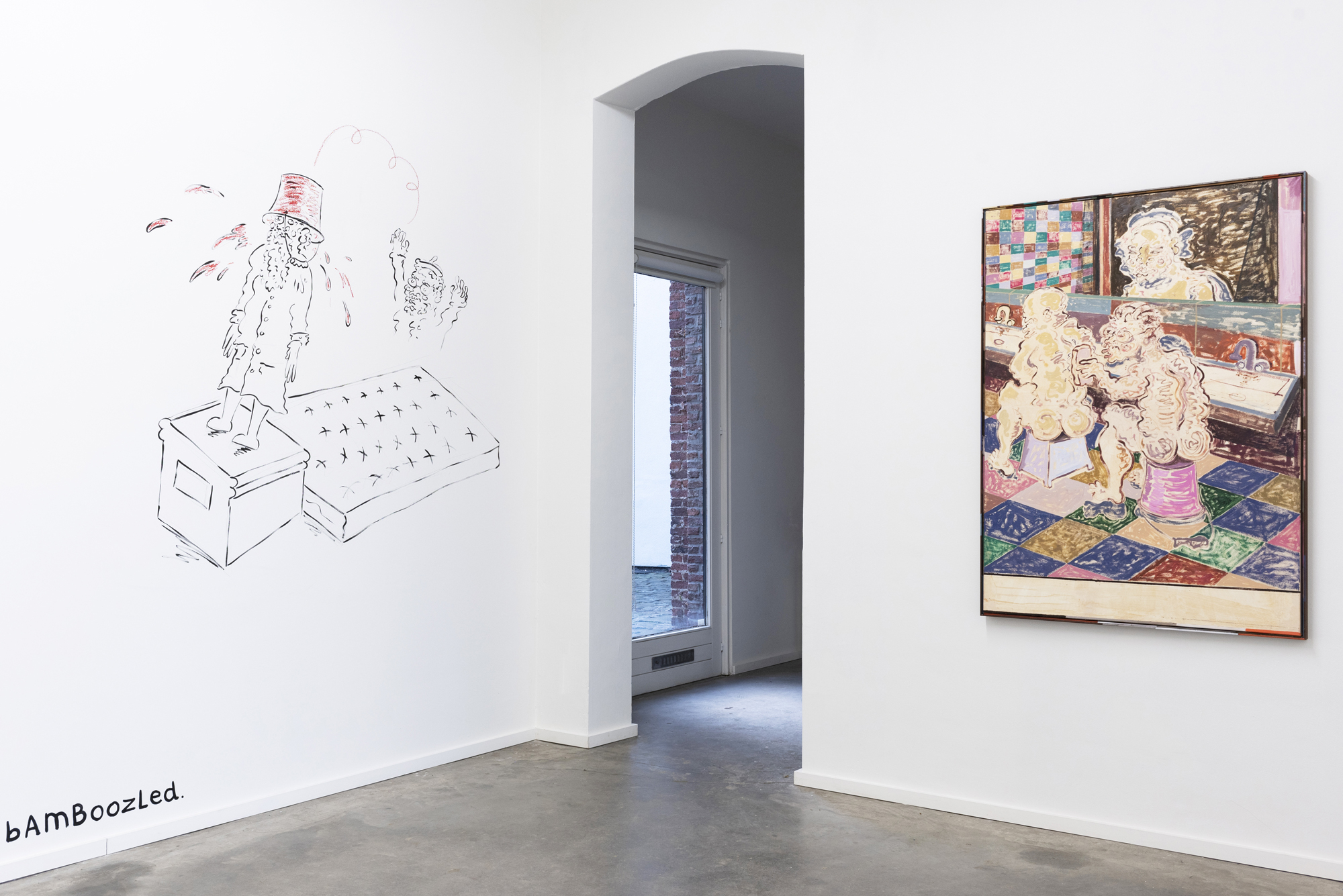 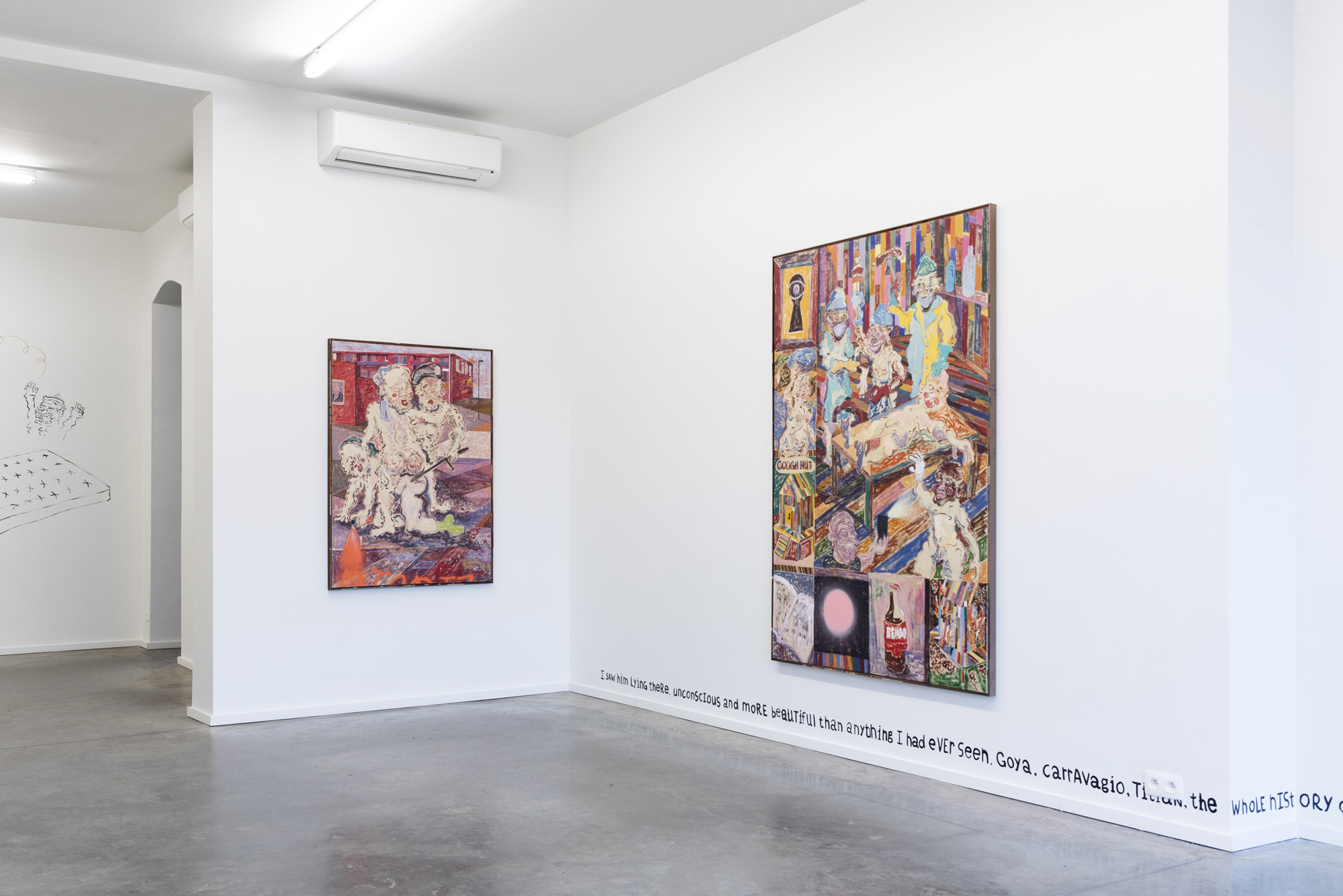 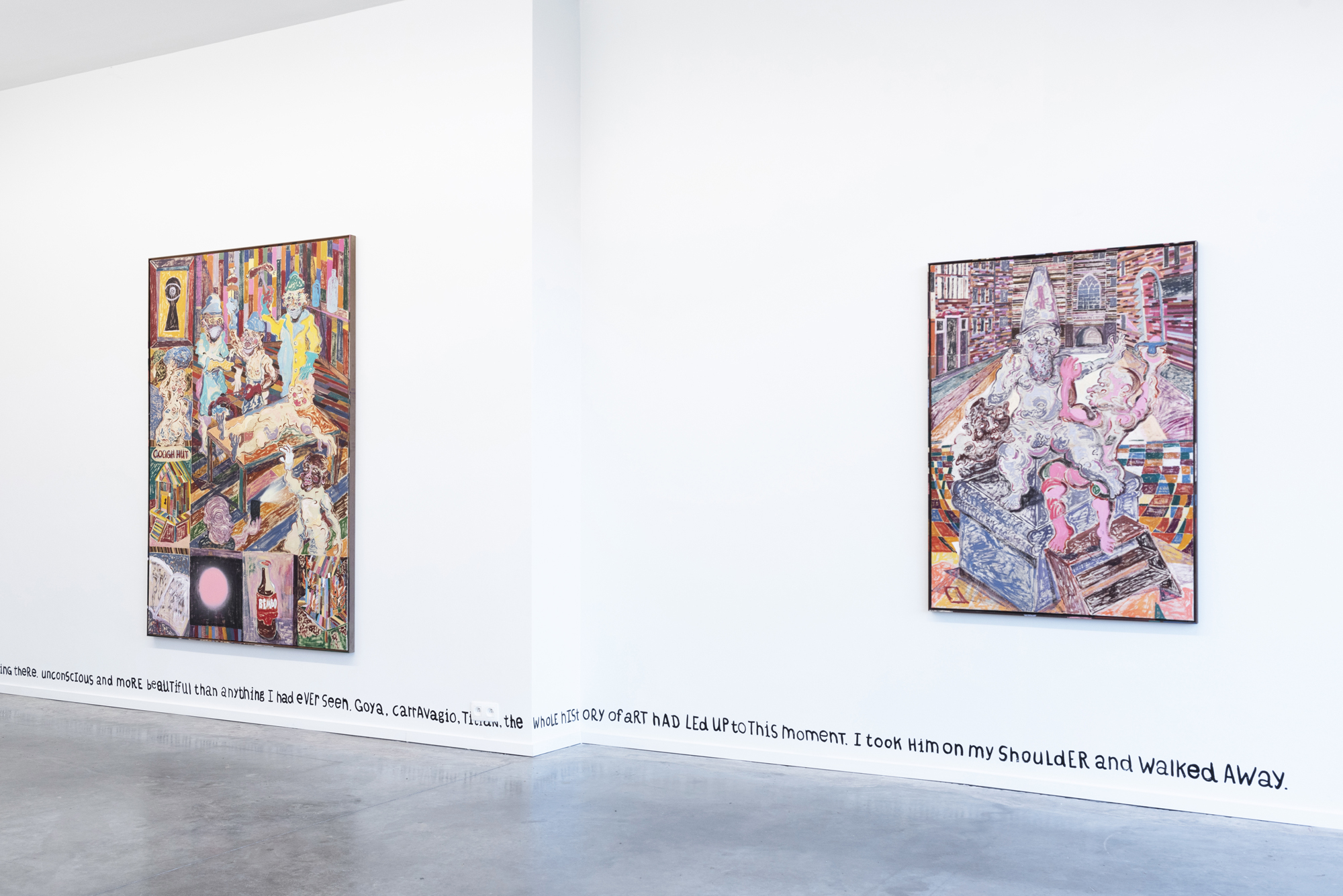 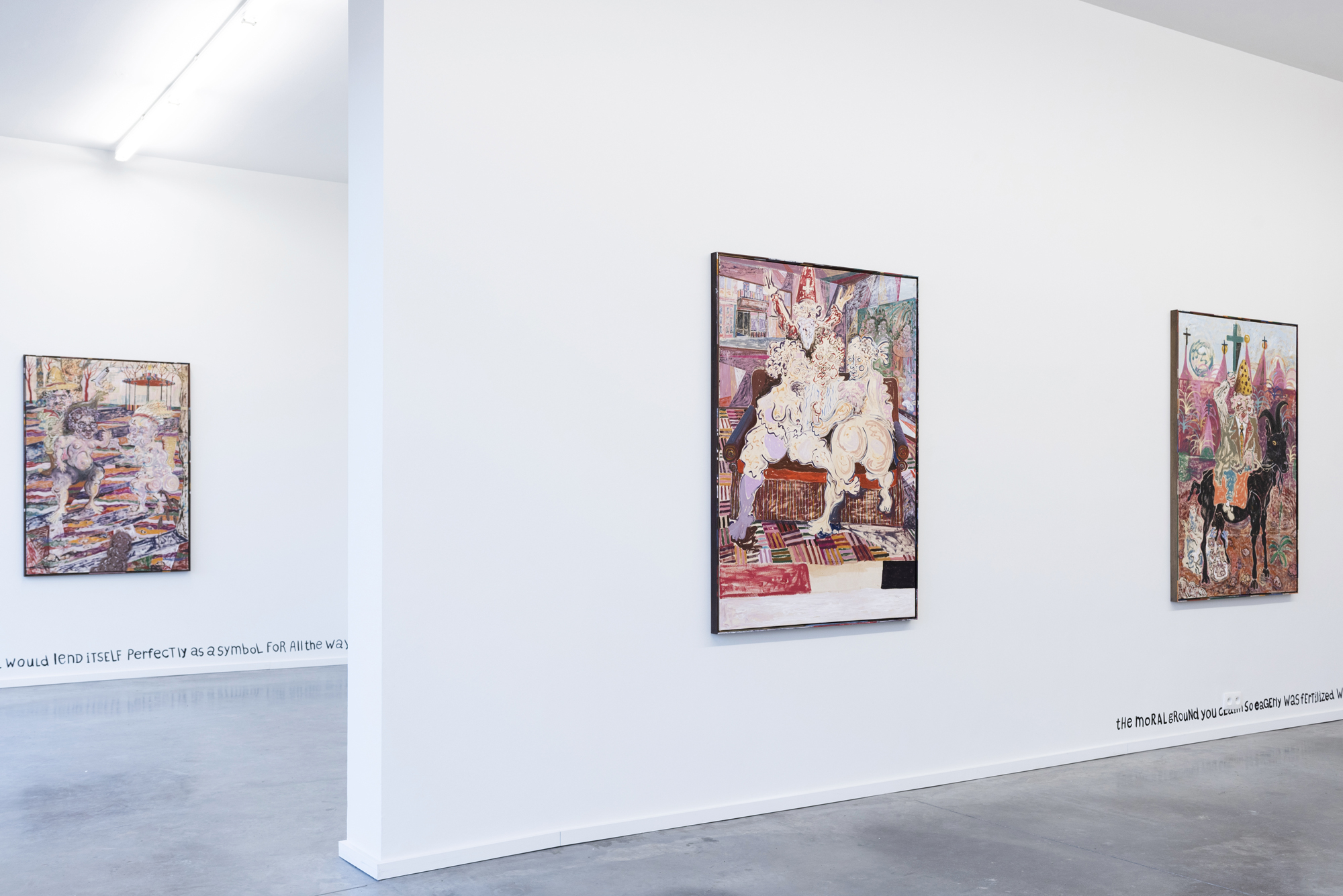 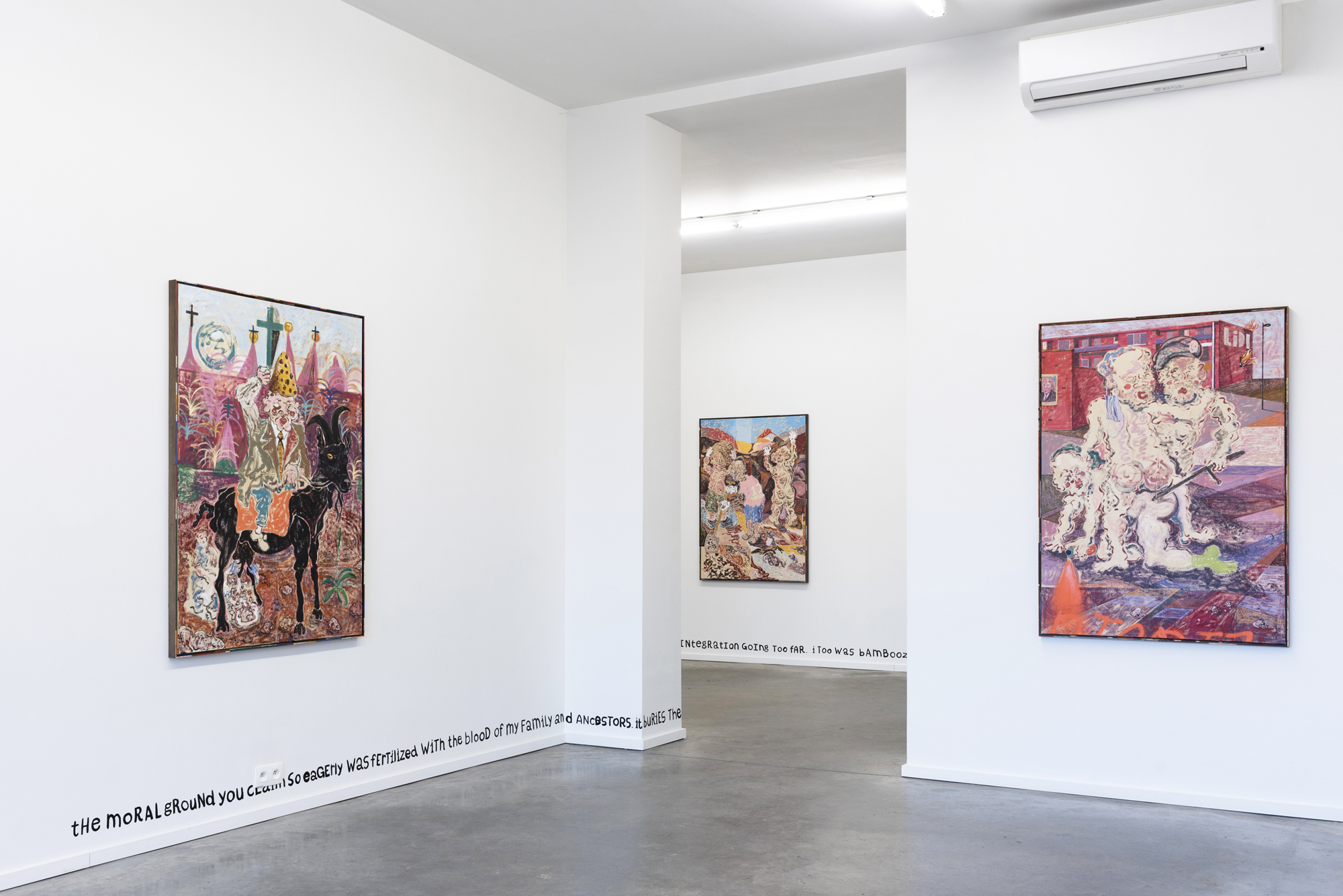 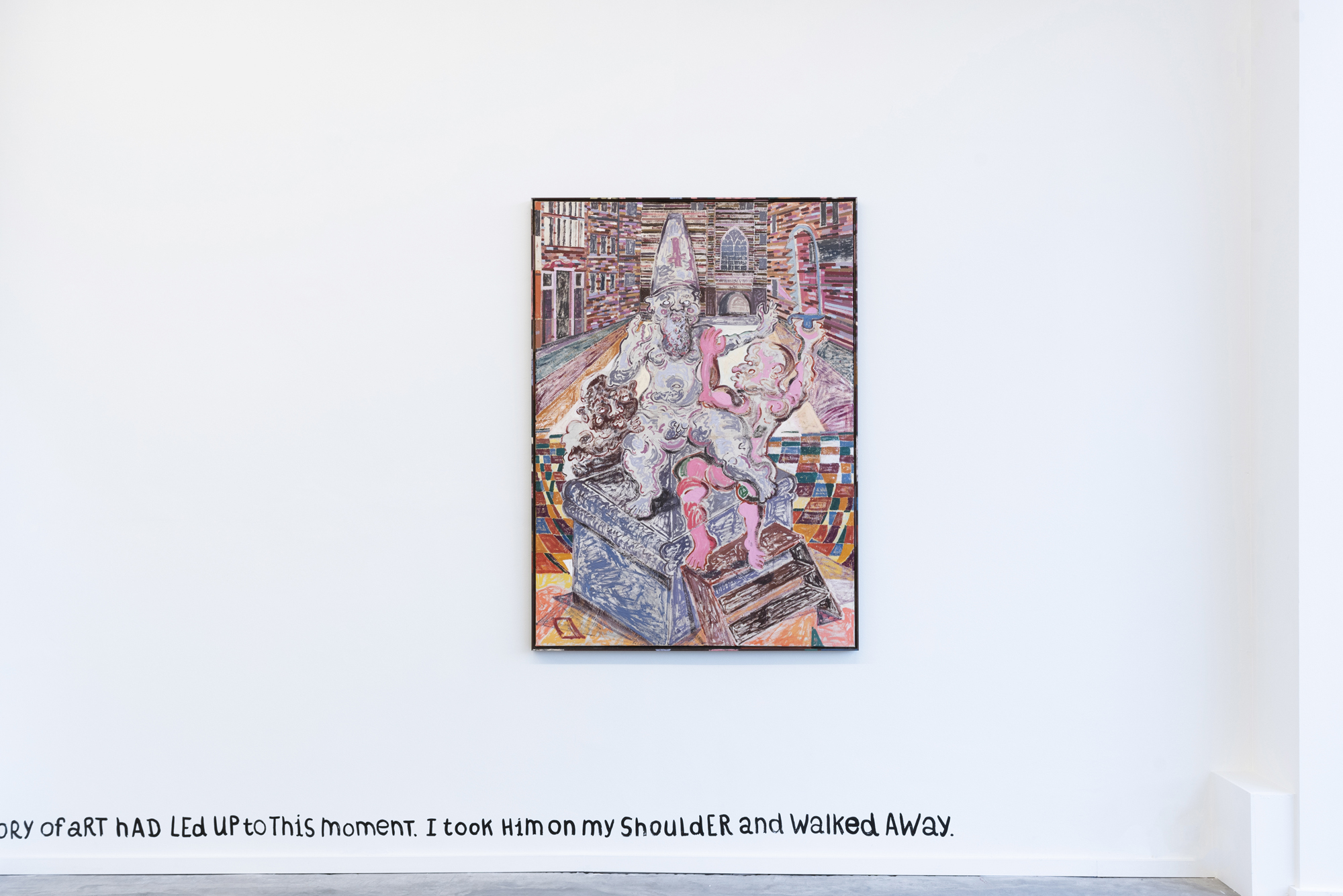 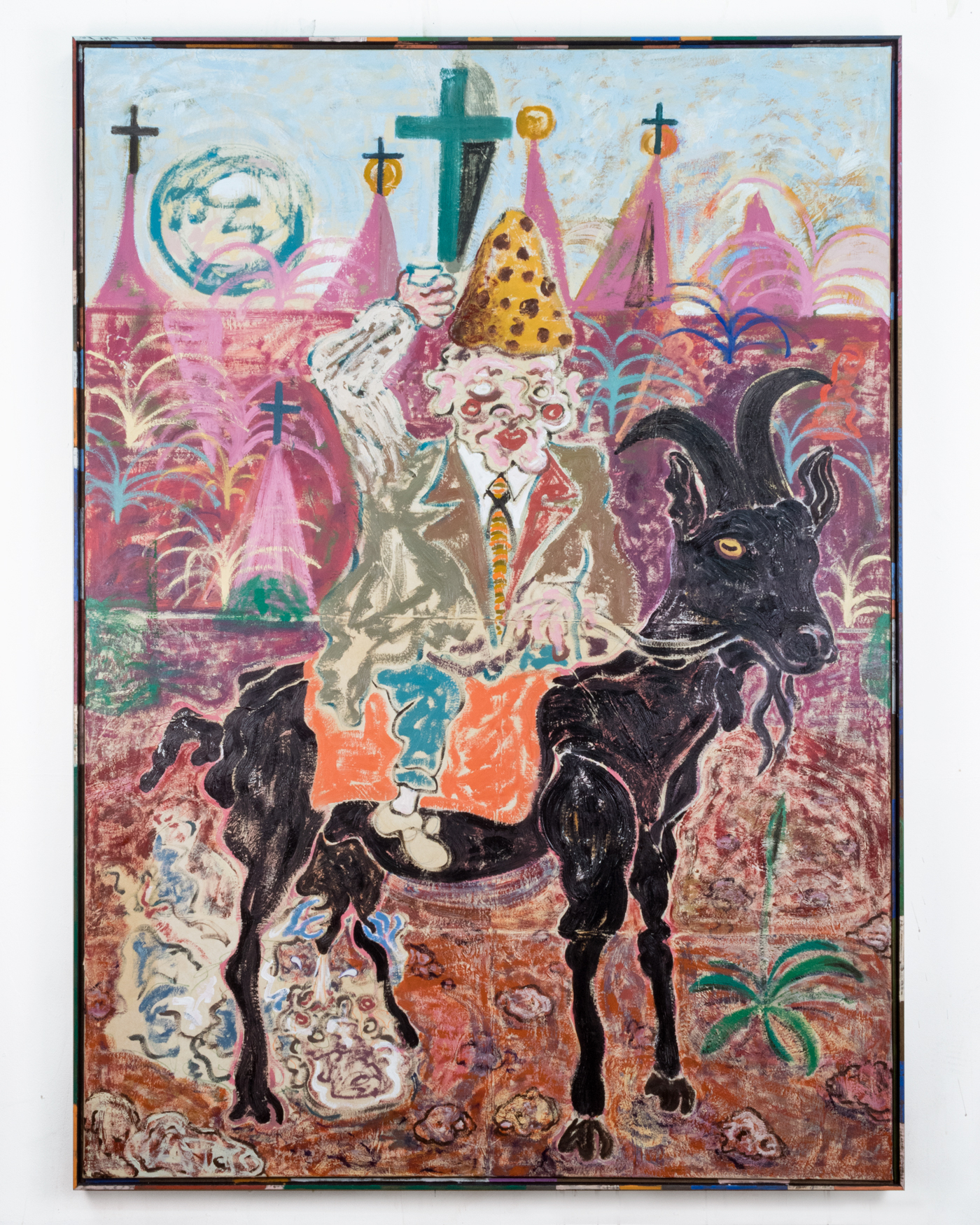 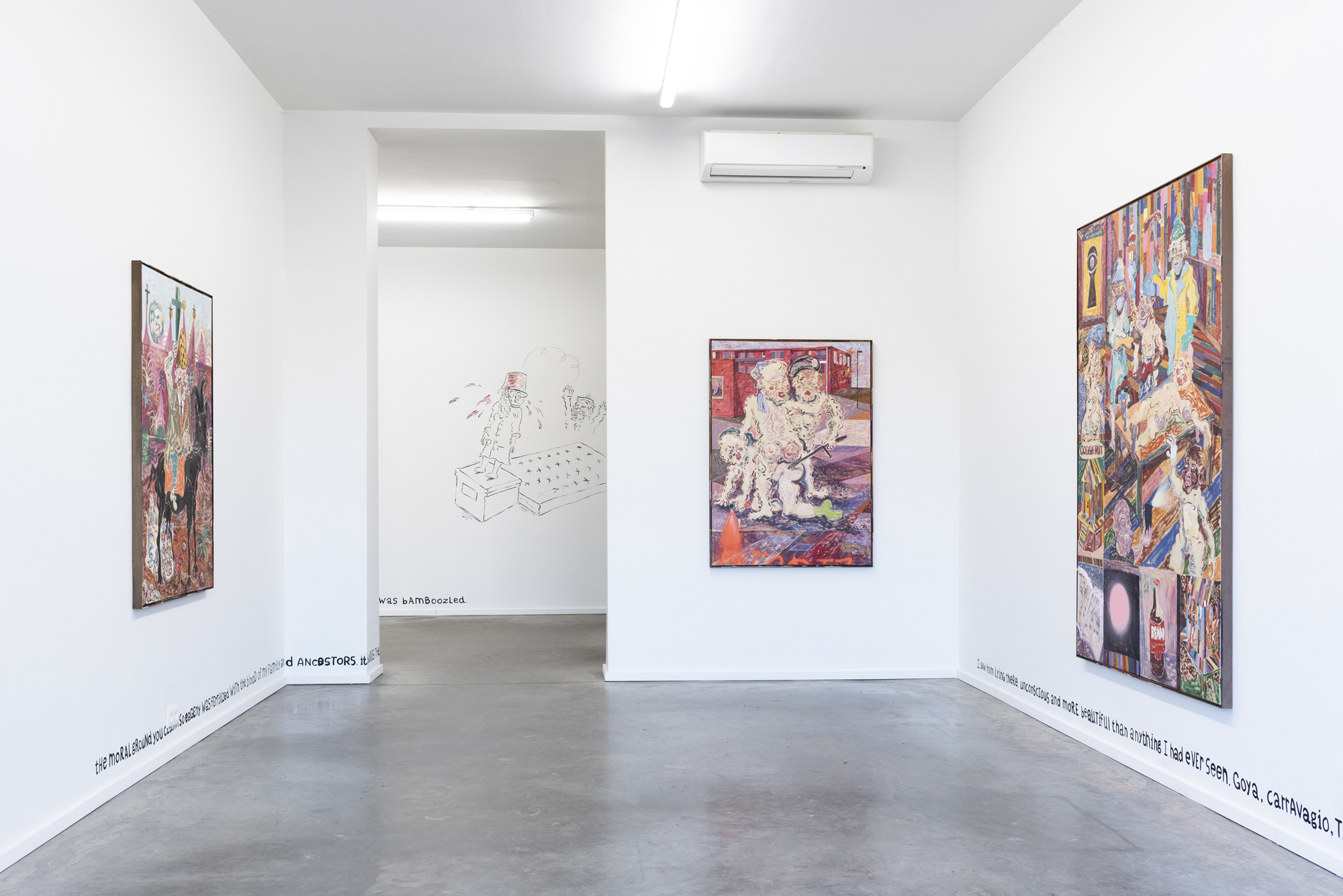 All the world's a stage and according to William Ludwig Lutgens (1991) the theatre unfolding itself on it is a comedy. The scenes he brings together in this exhibition express his understanding of the human condition in all its vibrant absurdity. Seemingly banal sequences from the everyday life are enriched with references to the history of art and the debris of modern-day urban life giving the paintings an air of universality while at the same planting them firmly in the contemporary. Bringing back home the experiences and influences he gathered during his residency in Korea and as a fellow traveler with Doctors Without Borders in the Democratic Republic of the Congo, Lutgens saw his familiar surroundings with new eyes. A discovery that resulted in his most mature works as of yet.

Considering himself a draftsman first and foremost, Lutgens had been looking for a carrier that would allow him to draw and paint at the same time and with the same swiftness. When he stumbled upon the Hanji paper that has been used for centuries in the Korean pictorial tradition, it was nothing less than an epiphany. In combination with the direct practice of applying paint unmediated to any available surface, as he had witnessed local painters doing in Congo, he developed a style that allowed him to bring his characteristic figurines, in which the hand of the artist manifests itself most strikingly, into the domain of painting. Maintaining the deliberate flatness of his drawings in the outlining of the dramatis personae of his paintings, allows him to focus more on and play more intensely with the composition of his theatrical tableaux both in terms of scenography and color. The latter consisting mostly of the earthy tones he also brought back from his trip to Congo.

Using the humoural theory - which claims the human body and soul are regulated by four bodily fluids and dates all the way back to the origins of Western civilization - as the thematic focal point for the histrionic approach of his subject matter, Lutgens populates his parade of stories with the archetypal figure of the putto. These chubby, childlike incarnations of human folly contrast the gravity of the issues addressed in the scenes - some of which are taken from news footage of riots and protests, others were witnessed by the artist himself - with a joyful and almost obscene innocence. History presenting itself as farcical debauchery with an emphasis on piss and jizz, puke and blood as narrative and compositional motives. Whether they are fighting over a statue, operating or torturing a patient with sausages, engaging in sexual ceremonies of the sadomasochistic kind or making a victory lap on the back of a goat, they never fail to unleash and embody mayhem and mischief.

A Belgian Master (of None)

Belgium is a country born out of theater and, as such, has a predilection for it in its DNA. Lutgens is unmistakably a scion of our long tradition of artists engaging with the comical gap between our aspirations and reality. In the paintings brought together here we find the scabrous carnality of Breughel and a joyous unmasking of Bourgeois complacency reminiscent of James Ensor. One is also reminded of the etchings of Goya in the way our present is used to show us our failings when filtered through an ironic sensibility that is nevertheless paradoxically used to express something sincere.

As if Lutgens is not only saying "Ecce homo" but also "Isn't he ridiculous?"