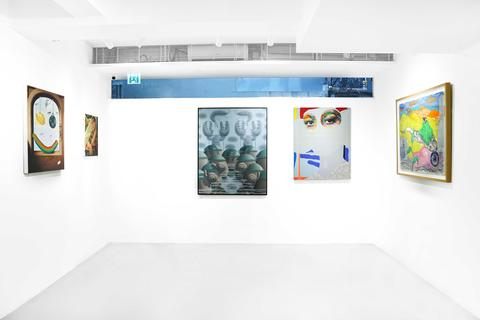 Much like the cosmos itself, the art world is an infinite realm composed of a great number of styles, techniques, subject matters, and motives for creativity. Orbiting around the shared qualities, the works sometimes construct entire galaxies or universes, often touching common philosophy or goals. The concept of Universes exhibitions is to introduce the artists whose practice revolves around exploring their own individual worlds, located in an unusual environment and populated with distinctive inhabitants.

The common denominator of the works featured in Universes 3 is the existence of different settings and beings or the unusual ways of seeing our everyday life. The often imaginary matter and space depicted in such visuals are sharing many qualities with the world we know, yet are placed within an unknown volume with different dynamics and rules of physics. Regularly inhabited by unique, peculiar, and recurring characters, these visuals are providing both the artist and the viewer with a much-needed getaway from the restraints and pressuring effects of current-day reality. Whether implying a different, greater actuality, making fun of or commenting on the existing state of things, or simply exercising their imagination and skills, these surreal universes keep expanding, unlike the real ones. With no limitation in place to restrict such an occurrence, these creative efforts are causing supernovas and shaping up nebulas from which new artistic styles or even movements can, and will develop.