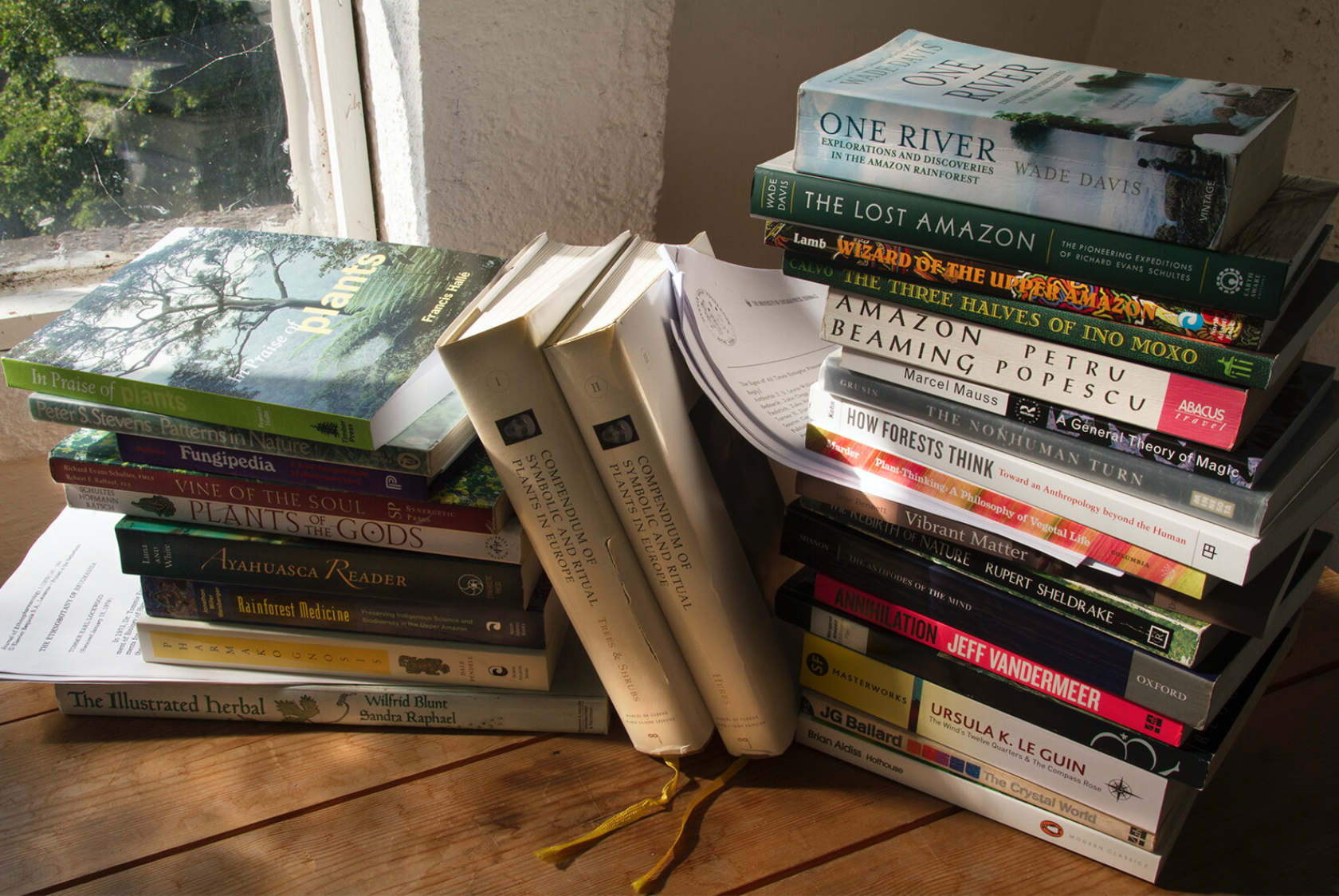 Nicholas William Johnson’s work implies the presence of an organising principle or logic inherent in plant life, contesting the view that plants lack their own agency, and delineating that agency as something fundamentally strange to us. He explores the notion of plant-as-actor through formal patterned arrays of botany and with paraedolia, the arrangement of forms in such a way that suggests a countenance, or a face, or a subtle sentience in nonhuman lifeforms. In his list of Further Reading, selected especially for The Botanical Mind, he charts the strands of thinking that inform his practice, situating plants as an alternate mode of consciousness.
Further Reading

REFERENCE WORKS
extraordinary tale of Manuel Córdova-Rios a mestizo from Iquitos, Peru, who was captured as a boy on a rubber trapping expedition and raised by them as a vegetalista. In the forward, Dr. Andrew Weil speculates that the, ‘ability to share consciousness through the medium of the visual imagination must be a capacity of the human nervous system … The visual cortex is implicated … What we see when our visual cortex is interpreting signals from somewhere other than the retina might have more to tell us about the nature of reality’. Archaeologists have called this sort of imagery entoptic phenomena. The Signs of All Times Times (Lewis-William, et al. 1988) is an academic paper of anthropology and archaeology which argues that palaeolithic art can be analysed using a neuropsychological model of the apprehension of entoptic (interior) imagery in three stages of plant induced altered consciousness with reference to form-constants in nature and the structure of the visual cortex. These form constants are also echoed in plant forms, and suggests something more about the nature of reality, an underlying thread perhaps connecting the mechanics of perception with the growth patterns in other life forms.

In roughly the last twenty years a broad school of thought has emerged called ‘the ontological turn’ or the ‘nonhuman turn’ in anthropology, ethnography, philosophy, and theory. In anthropology Philippe Descolar (Beyond Nature and Culture, 2005) considers the ways humans have lived and live, alongside plants and animals and recontextualises the western world view in the context of ‘multi-species ethnography’. How Forests Think (Eduardo Kohn, 2013) builds on 25 years studying with the Runa in the Ecuadorian Amazon. Kohn’s claim that forests think, is about forms of thought – forms of representation – beyond language.

There is a trend here towards dismantling old anthropocentric models of thought and classification towards something decentred, ecological, environmental – the rhizomatic as opposed to an arboreal model of knowledge (Deleuze & Guattari) and the companion-species and cyborgs of Donna Haraway. Jane Bennett in an essay on Object Oriented Ontology says “the nonhuman turn can be understood as a continuation of earlier attempts to depict a world populated not by active subjects and passive objects but by lively and essentially interactive materials, by bodies human and nonhuman.” (The Nonhuman Turn, Ed. Grusin 2015). She cites poet Walt Whitman as an example, and Spinoza. Especially so in this decade there has been a windfall of thought on this subject. Michael Marder is an important proponent. Following a raft of scientific papers on the subject, in ‘Plant-Signalling

Botany has shifted historically from taxonomy to gene sequencing and along the way many strands of thinking about plants have emerged in accord with other ideas.

In Praise of Plants by Francis Hallé (1999) examines plant morphology and growth patterns and their implications further afield. He finds analogues in crystallography by physicists, the mathematics of fractal branching patterns and their space filling tendencies, the architecture of corals, or tree ‘crown-shyness’ as an indication of a mechanism of awareness of self and other in plants. Primarily Hallé’s book examines anthropocentric and zoo-morphic biases in botany, that plants unfold increasing their surface area for example, whereas animals do the same by a process of infolding. Hallé examines the decentred nature of plant life which is quite alien to concepts of the individual and sexuality.

Ethnobotany, the ethnographic study of plants, concerns the relationships between plants and humans, as with the rubber trees studied in the Amazon by the botanist Richard Evans Schultes. His study of these trees inevitably bound him to the many tribes that live in the Amazon and their endless knowledge of the vast network of flora there. Schultes is the pioneer of
modern ethnobotany best known for his work cataloguing the many medicinal plants used by the indigenous people of the Amazon. His works often take the form of an herbal, which describe the plants botanically, their chemical analyses and active compounds. Ethnobotany also takes the form of anthropology cataloguing the attendant uses, rituals, myths and cultures surrounding plant life. Compendium of Symbolic and Ritual Plants in Europe (1999), is an exhaustive reference of the way European plants have played a part in the religious experiences of humans. ­­­­

The names of plants can be tidy, cryptic parcels of information and history. Knowing the names of plants often means tracing their histories and symbolisms. A species of Brugmansia volcanicola was named, for example, by RE Schultes because he discovered it on the slopes of the Paucé volcano (One River, Wade Davis, 1996). Plant names also change with histories and cultures. Banisteriopsis, was first named telepathine, because of the alleged telepathic inducing powers of the plant – later changed to caapi an indigenous name for the vine when the alkaloid in question was determined to have already been isolated elsewhere. That plants and their properties are known to us at all is because of the people who have lived with and used them – ritualistically, medicinally, agriculturally – and those intrepid enough to go looking for them. A Wizard of the Upper Amazon tells the and Behaviour’ (vol. 7:11, Nov 2012) Marder outlines the ‘phenomenological framework of plant intelligence’. His books and work develop the philosophical model of plant intelligence in opposition to old western metaphysics.

Hybridity, symbiosis, loss of control, erasure of the boundaries of self, expansion of consciousness in the vast network of the natural world we are all already enmeshed within, all of these ideas are explored in these science-fiction stories and the more recently demarcated genre called the ‘New Weird’. ‘Plant consciousness’ is a theme that has occasionally been the subject of speculative fiction, especially, e.g., in the compendiums of Ann and Jeff VanderMeer and his own stories, where plants or plant-like lifeforms often hybridise and transform humans, decentralising their bodies and dissolving boundaries we traditionally ascribe to individual life-forms. In The Southern Reach Trilogy (2014) a biologist inhales a spore of a lifeform she is observing and gradually has to accept her role as an unreliable narrator, no longer detached from the landscape she is observing.

Often these fictions describe a transition – or mirroring – between the interior mental states of their protagonists and the exterior world of plant life or landscape and their rhizomatic or fungal networks of ‘consciousness’. In Vaster than Empires and More Slow, Ursula K. Le Guin (1975) writes about the merging of planetary vegetal consciousness and an empathic alien. Hothouse, by Brian Aldiss (1962) a story of a continent-spanning banyan tree, plants with nervous systems, and a symbiotic, knowledge bearing morel fungus. In JG Ballard and Margaret Atwood there have been fusions of interior states and exterior landscapes (The Crystal World, Ballard 1966 & Death by Landscape, Atwood, 1991). Alan More’s comic series Swamp Thing is a cult deviation on these ideas, grandiose passages of imagery and prose propose the union of a human and plant and eventually intergalactic consciousness. In the obscure, quite beautiful film, Silver Heads, by Yvgent Yufit, (1999) Soviet scientists design an experiment to form a synthesis of human and tree DNA, which needless to say results in increasingly irrational behaviour and integral psychological contradictions in the subjects. Vegetable life perhaps is more difficult to master.

All words by Nicholas William Johnson