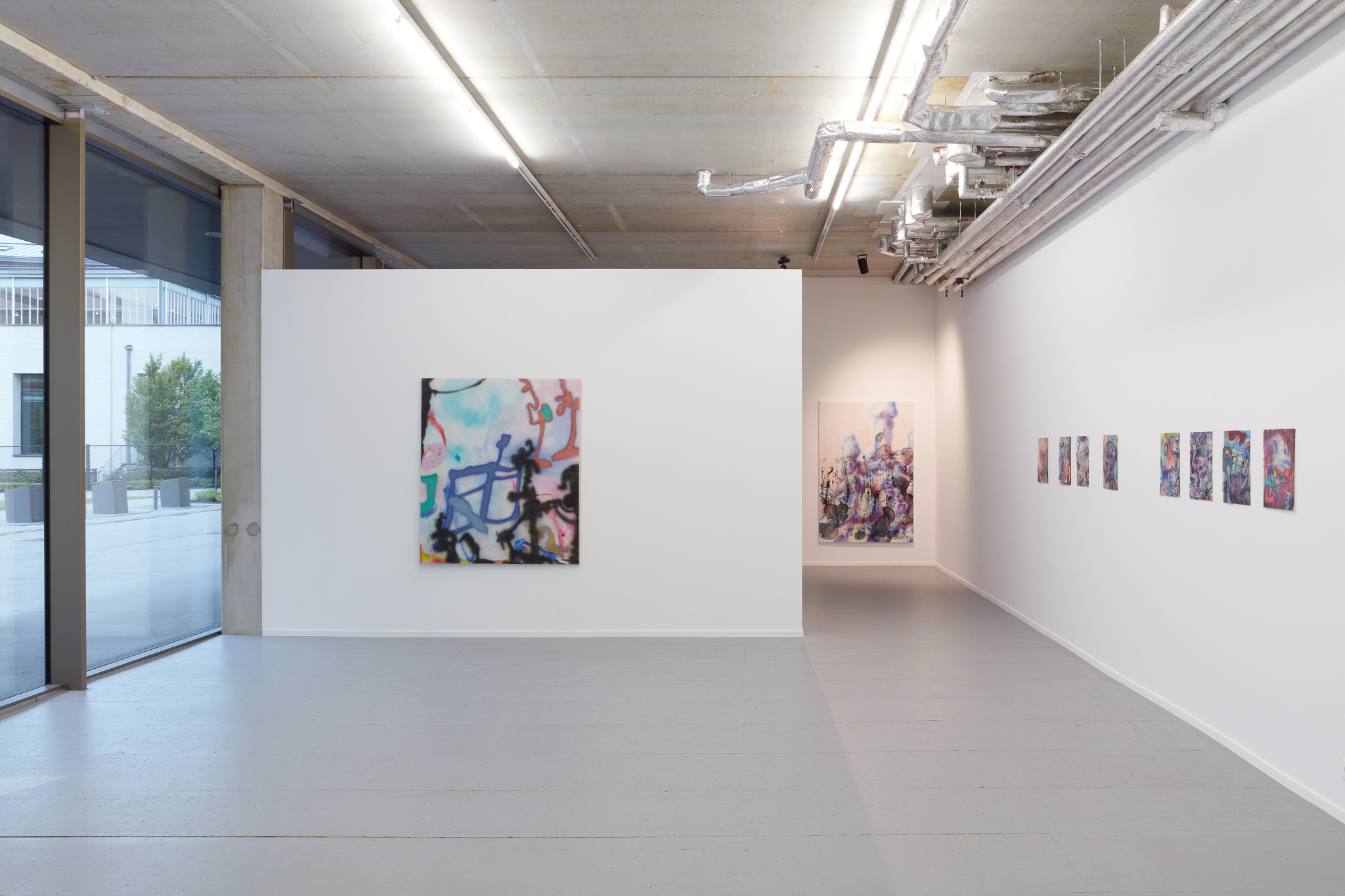 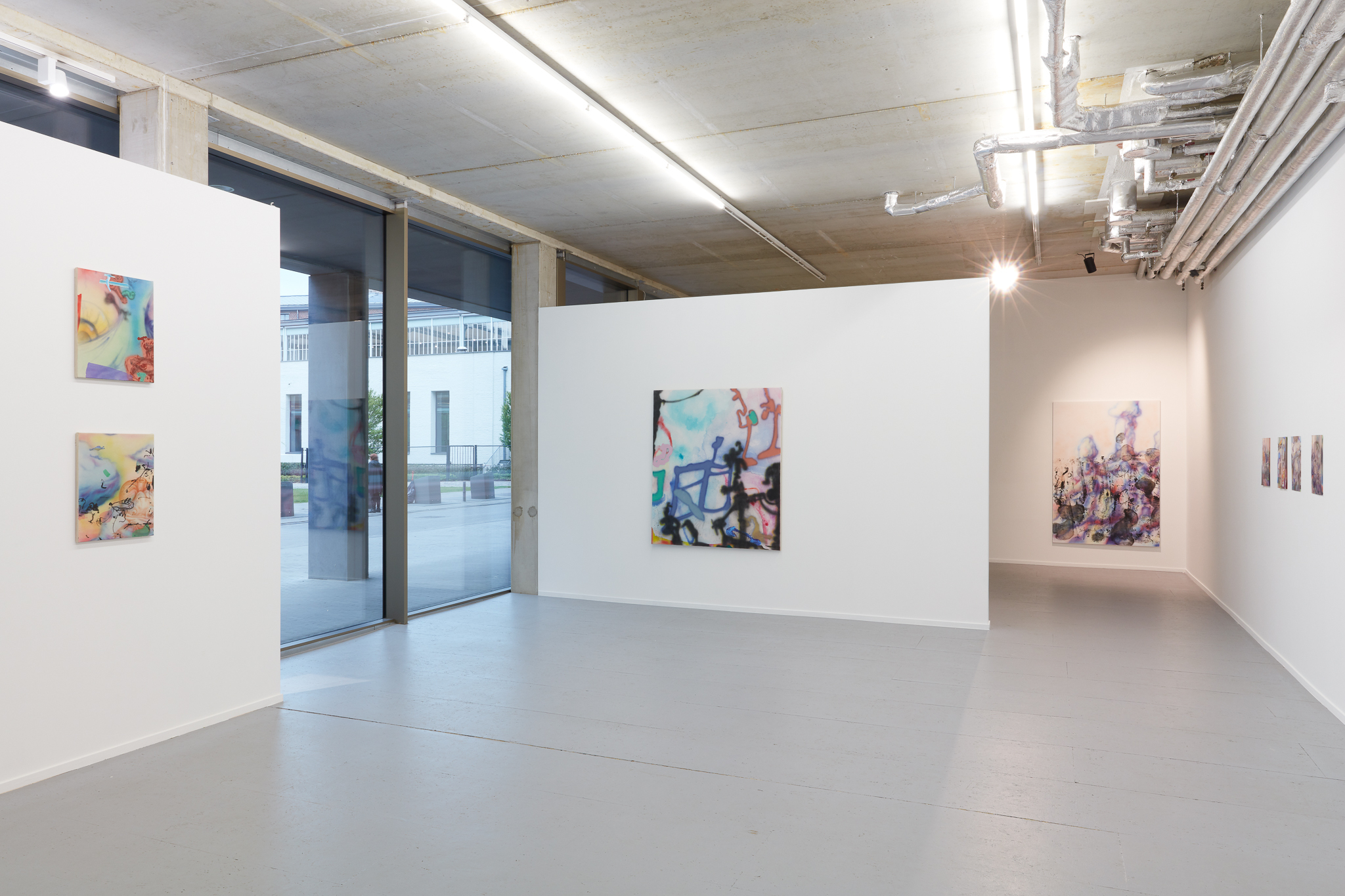 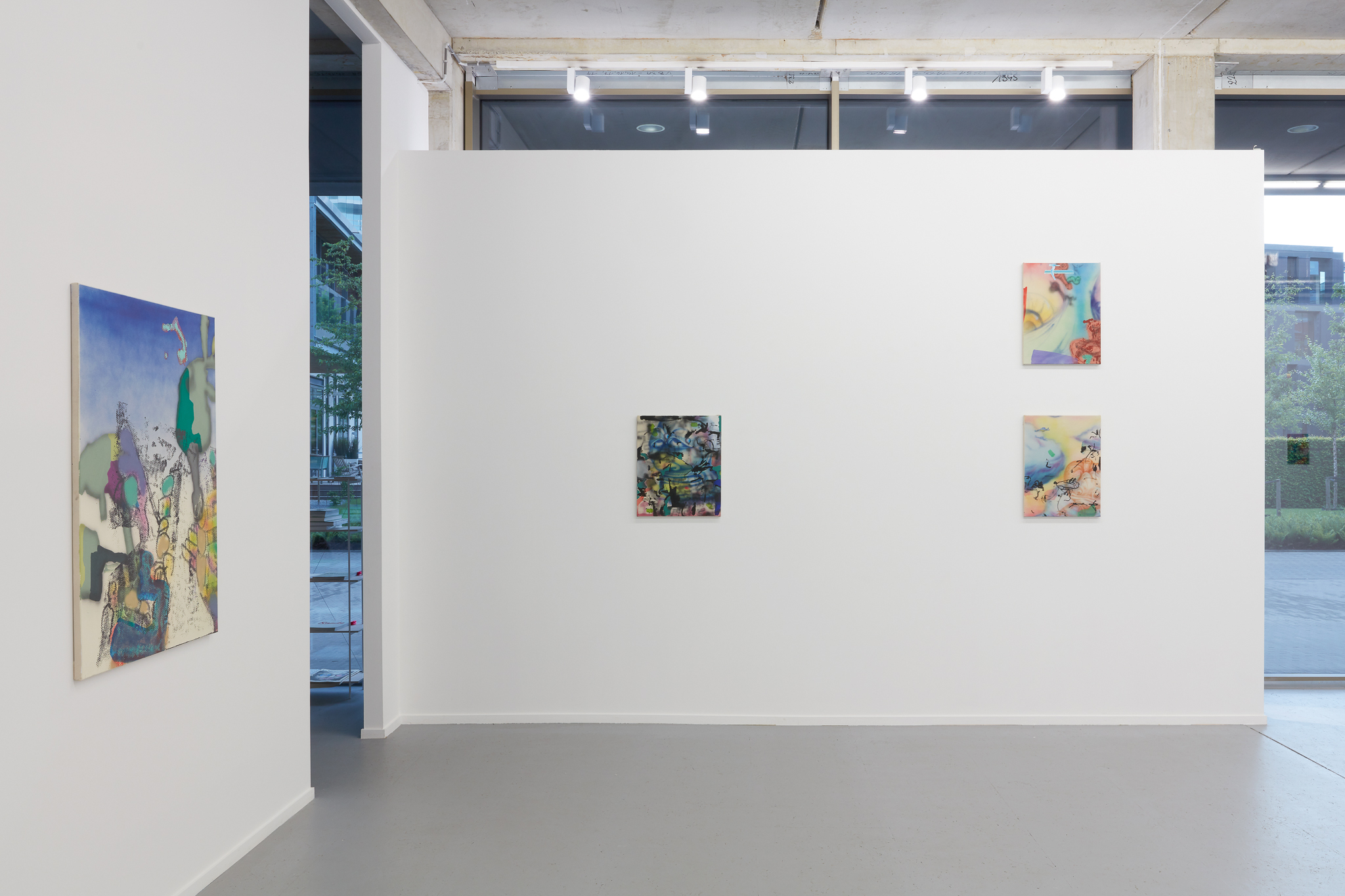 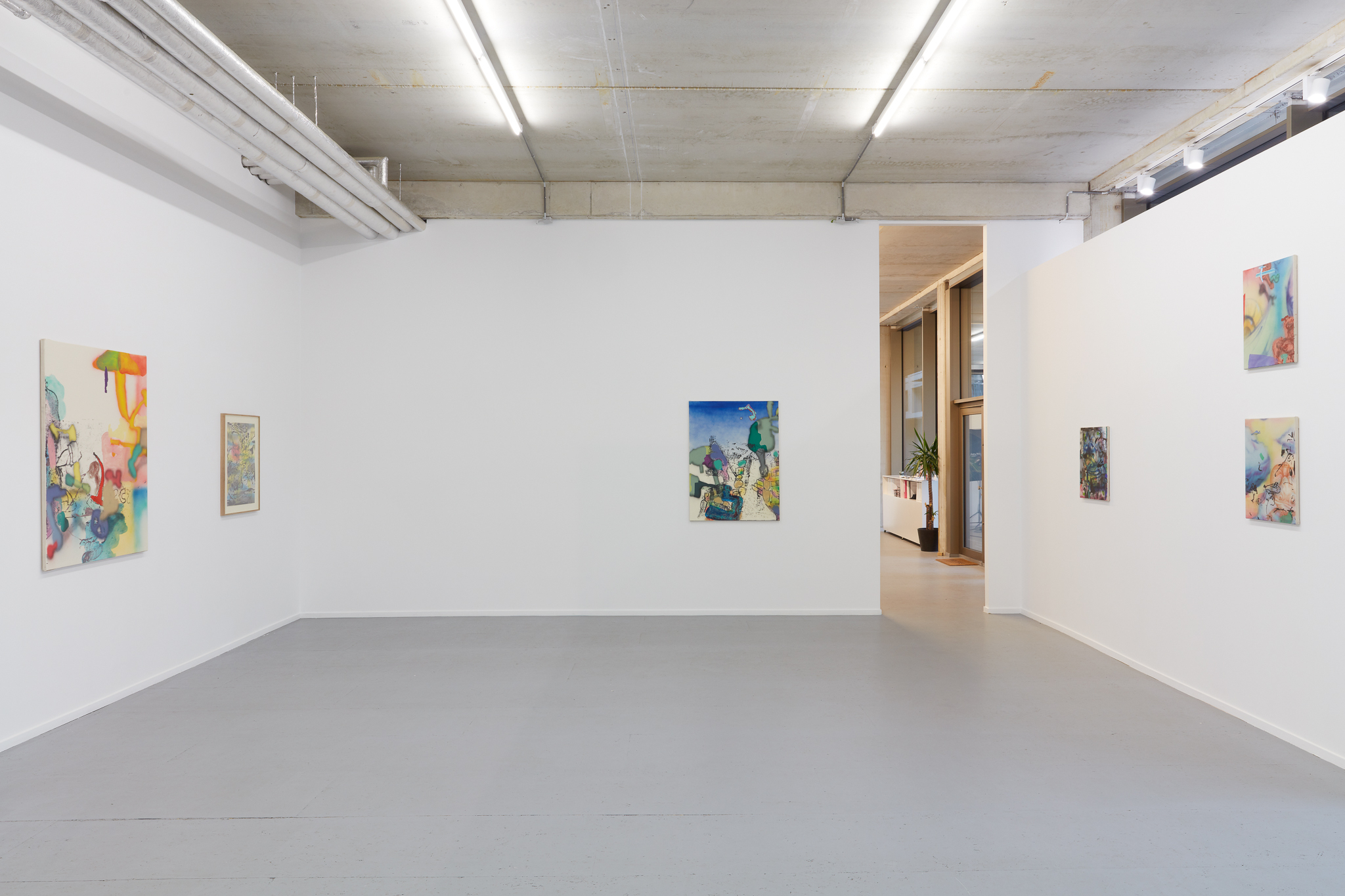 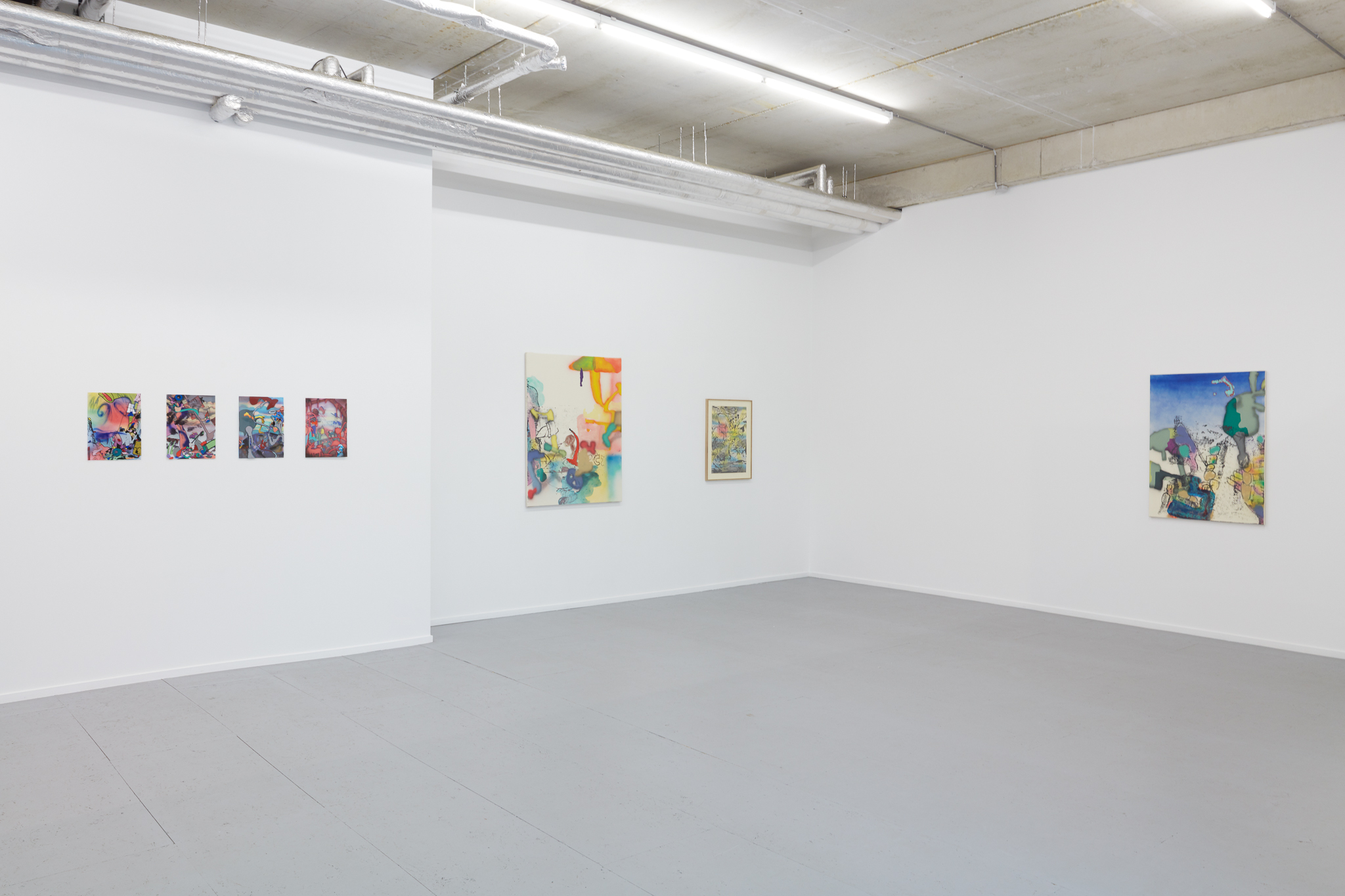 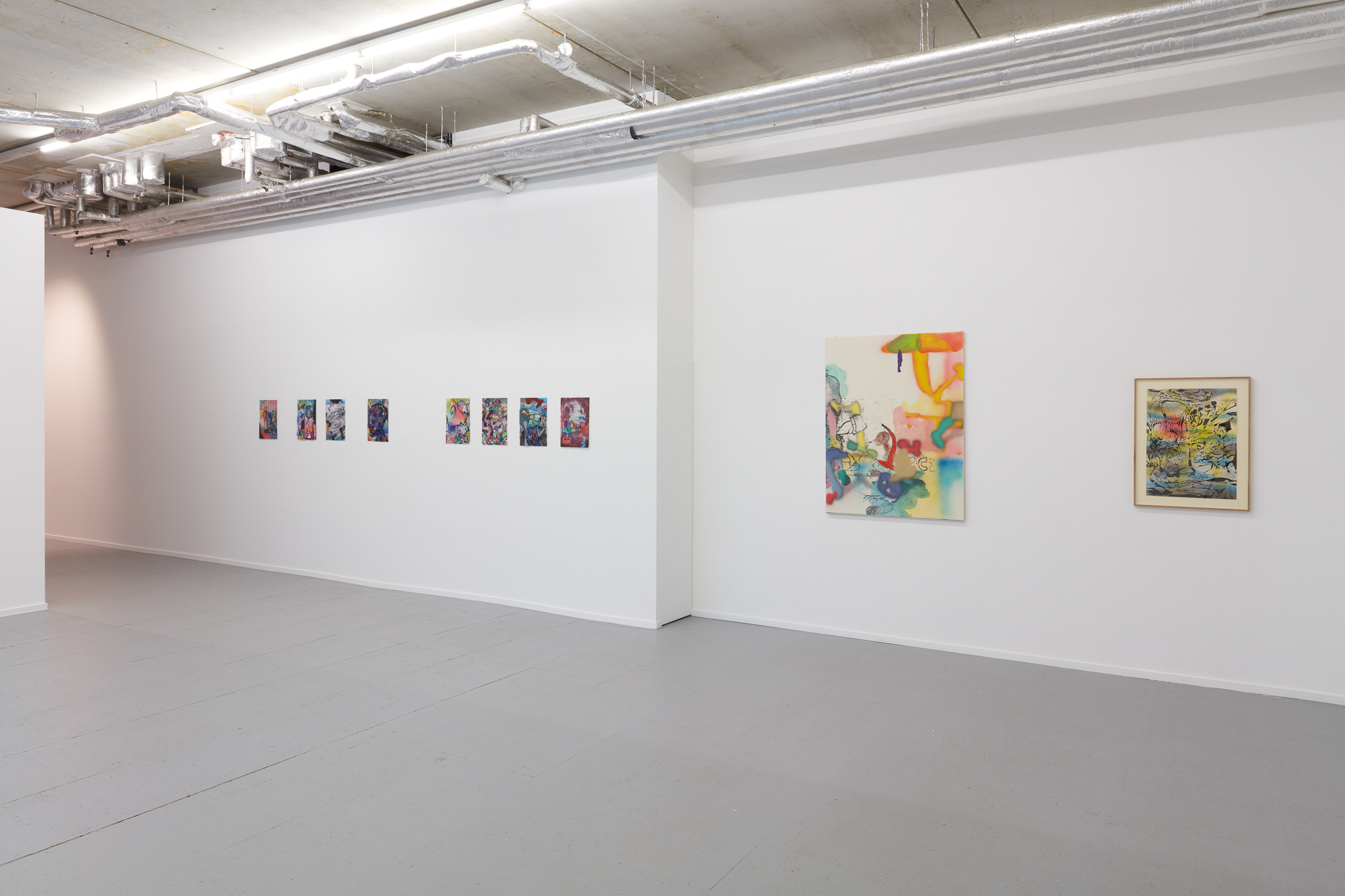 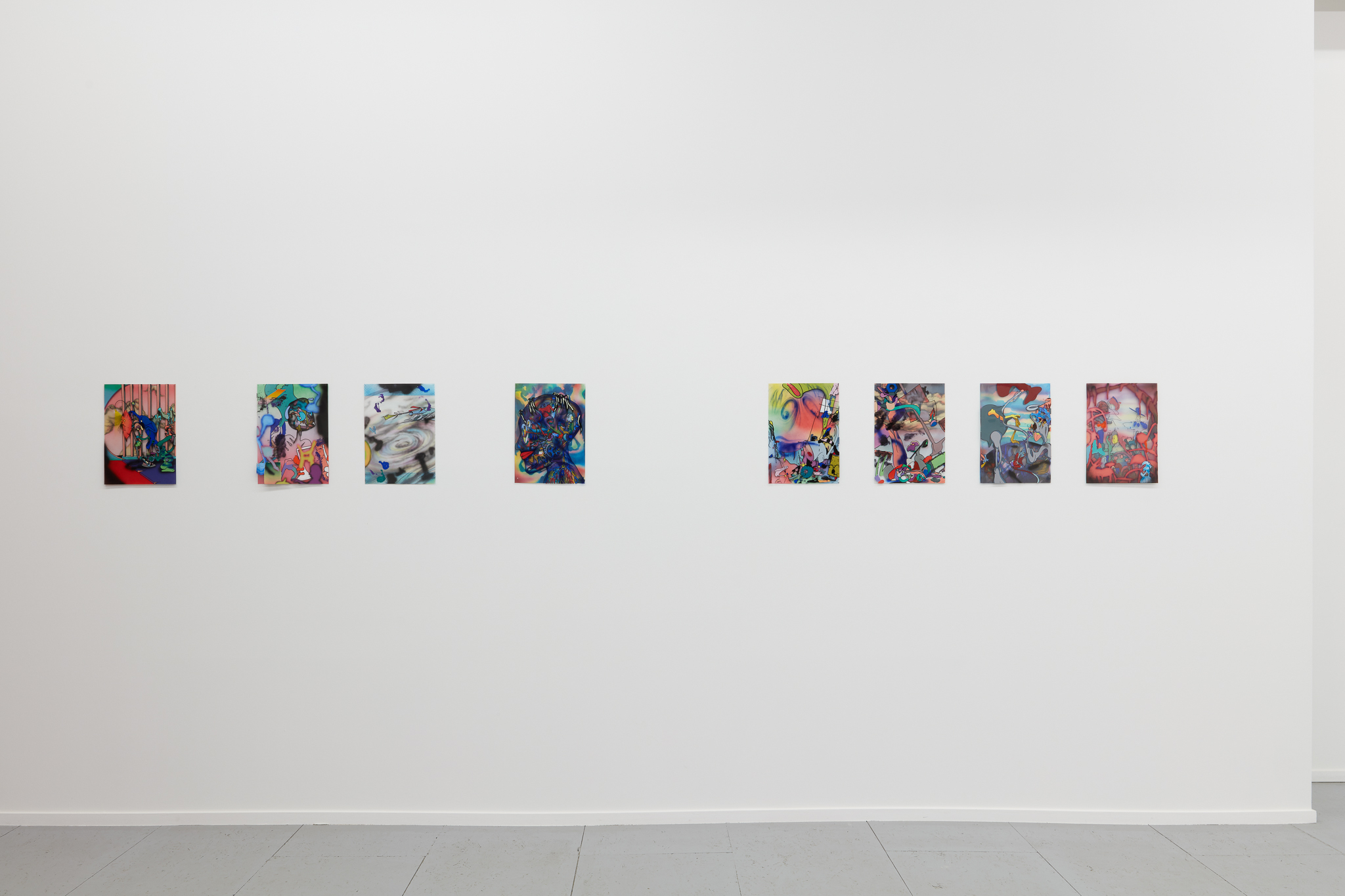 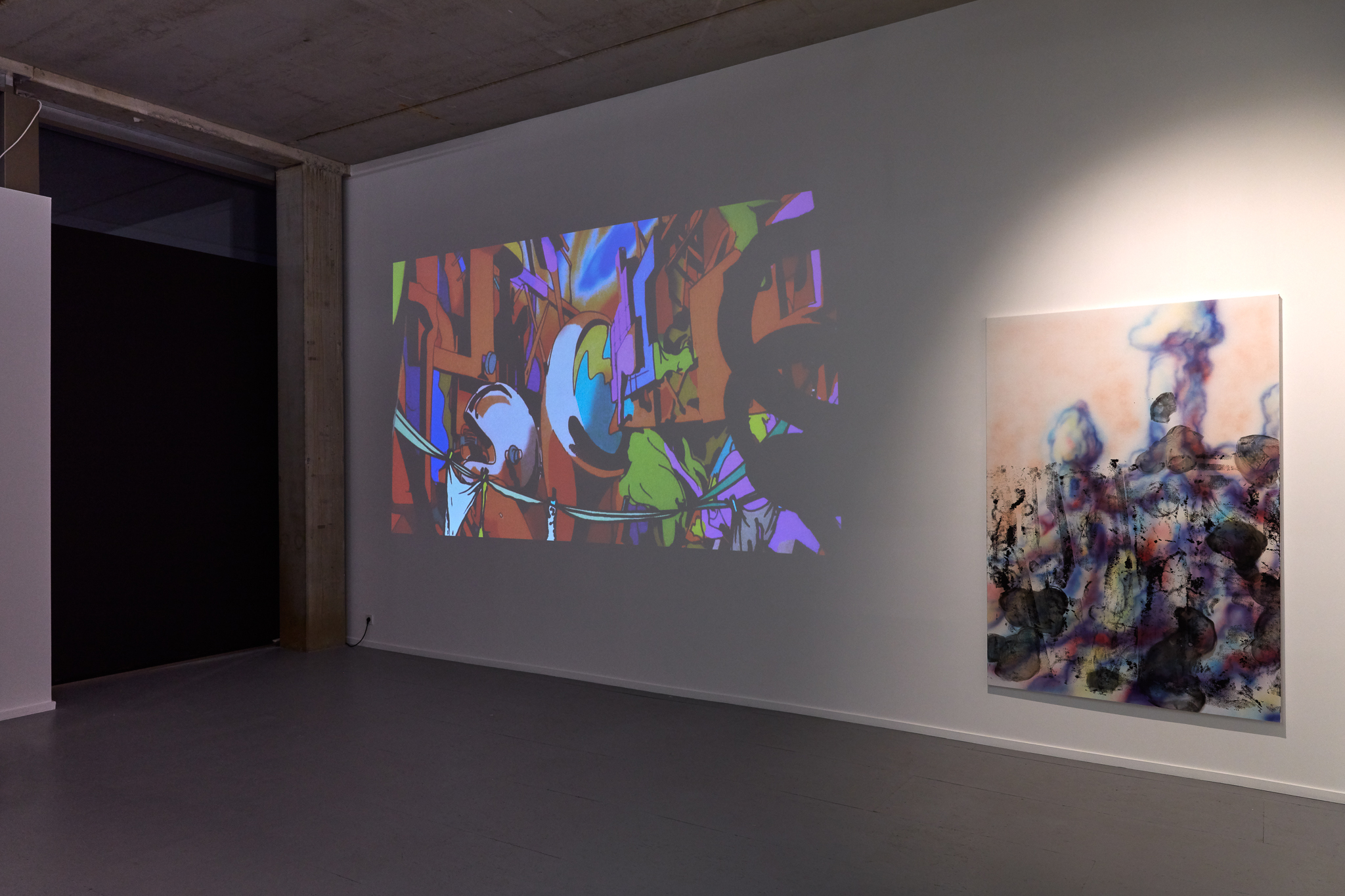 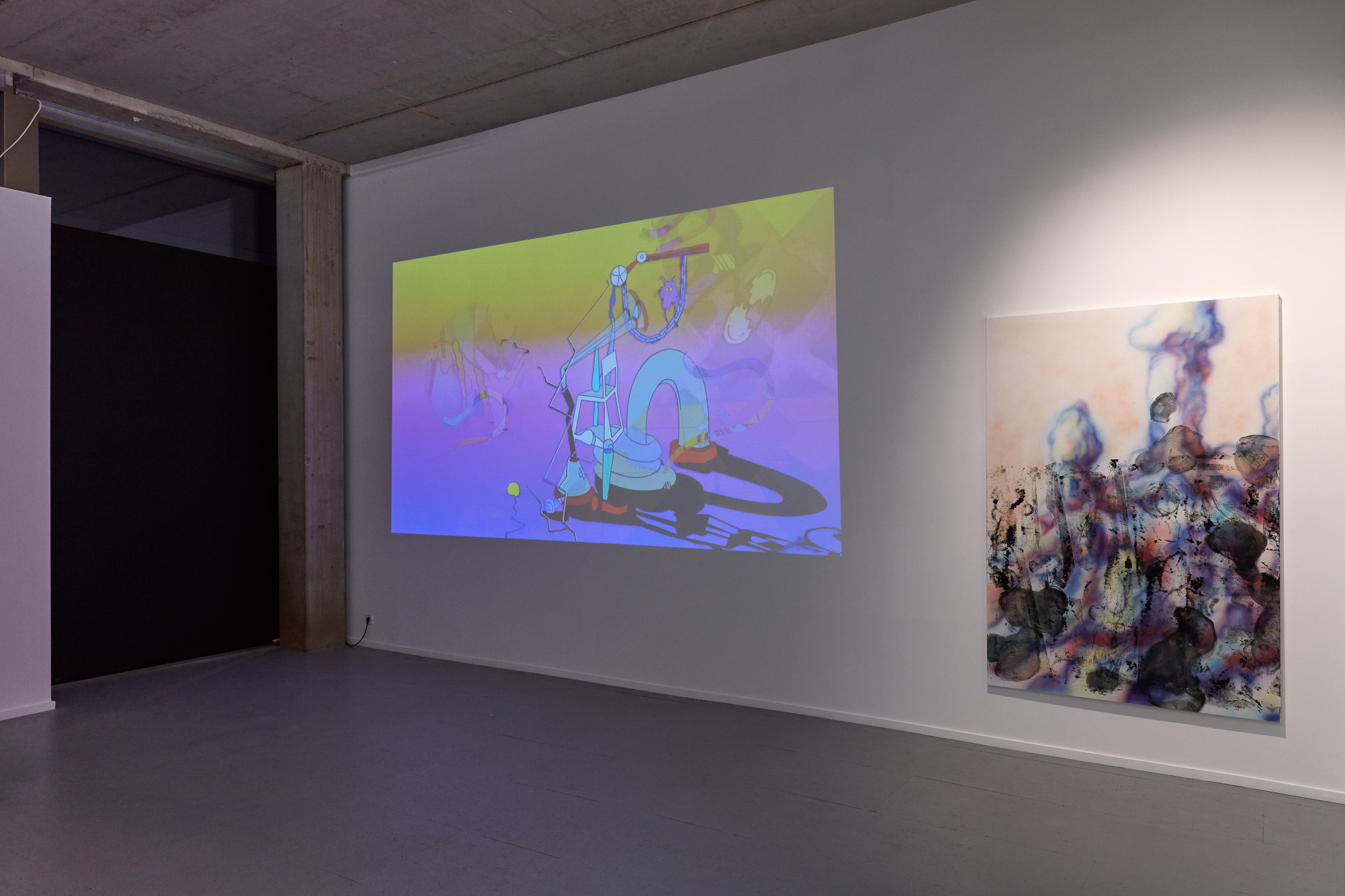 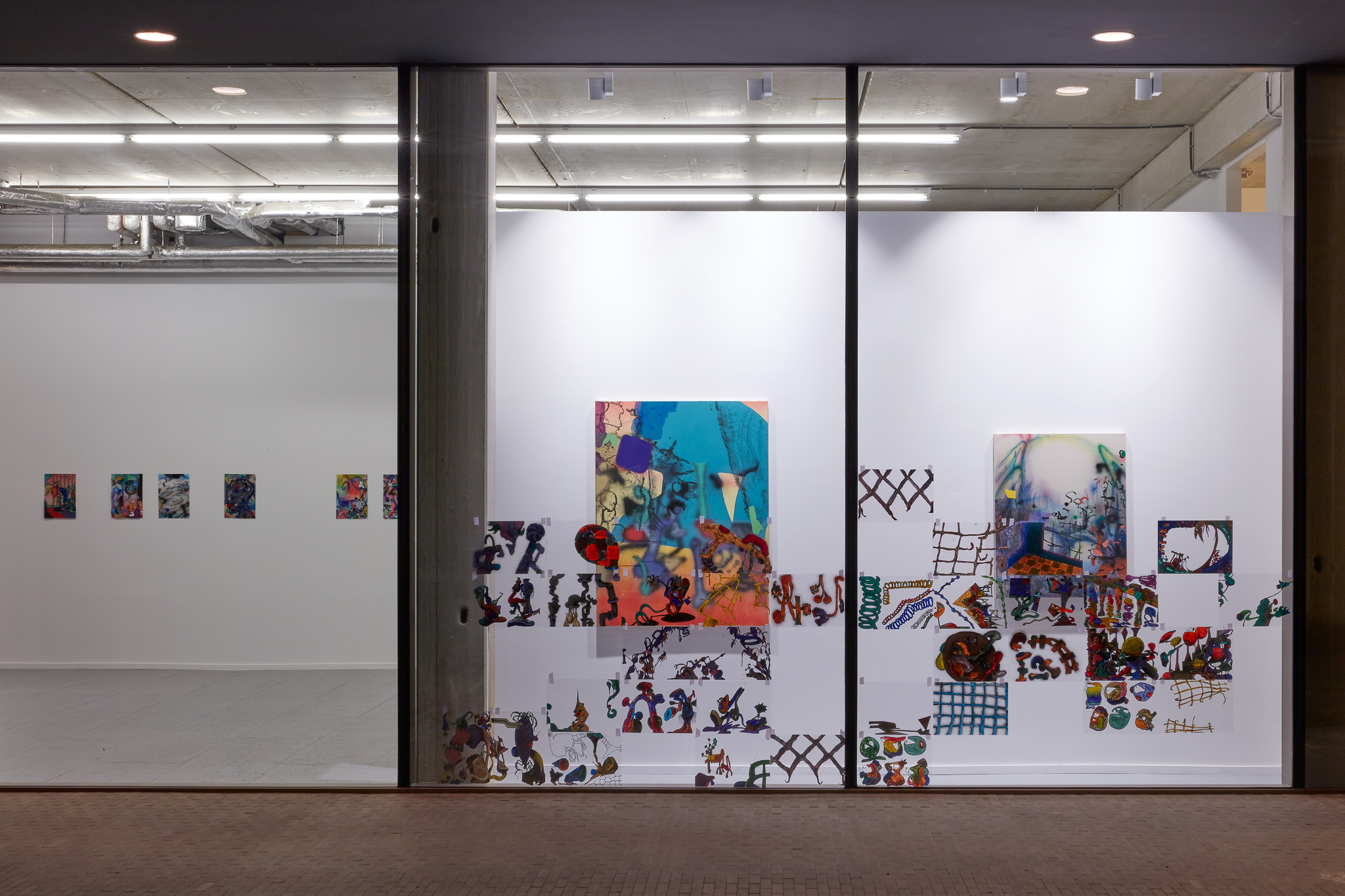 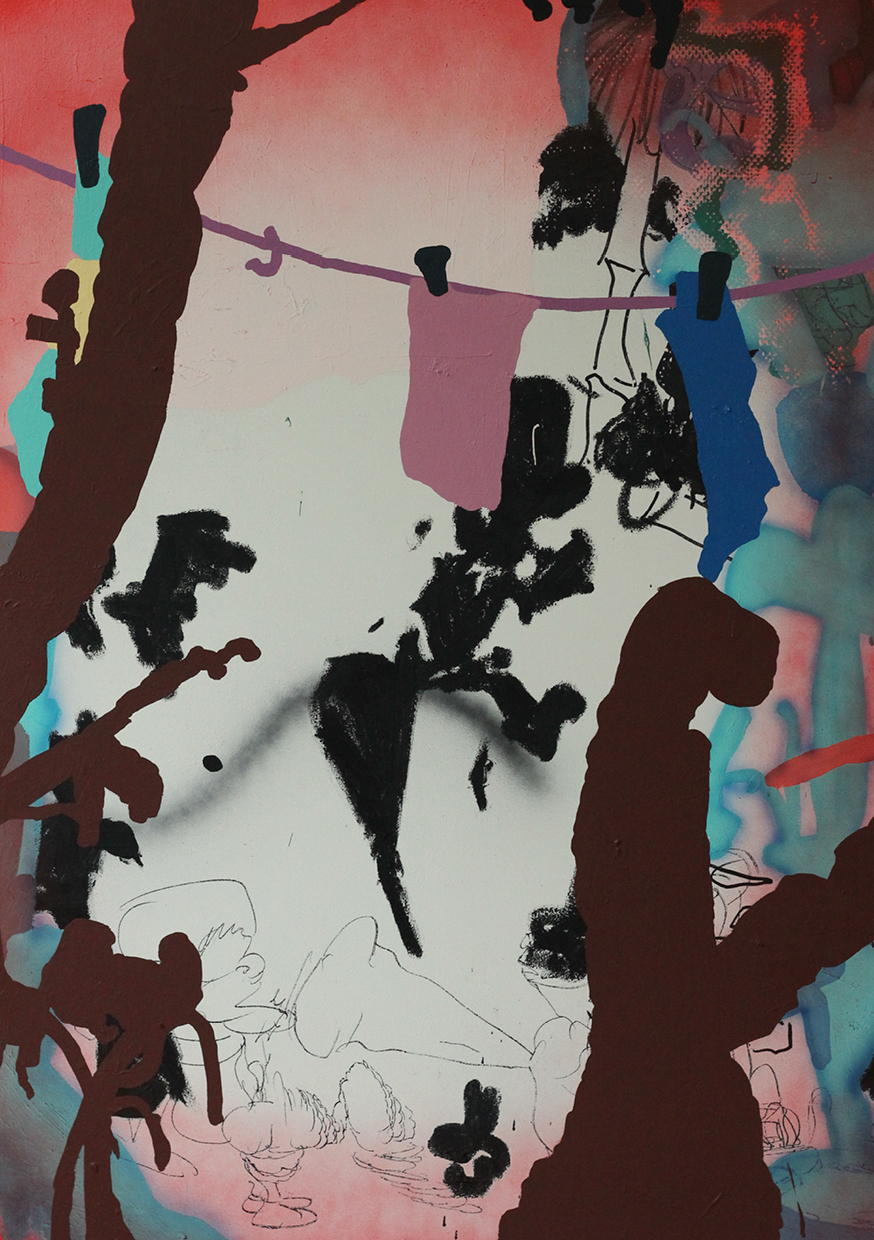 ‘I’m the Glue’, Antwan Horfee’s second solo exhibition at PLUS-ONE Gallery, offers an overview of his recent artistic practice. Horfee spent his entire youth using the public spaces of his urban (and global) neighborhood to find a personal form of expression. Choosing not to settle for the most conventional life paths, he discovered his own raw energy, and drowned himself in plenty of cultural sources to quench his thirst, constantly digging and collecting a variety of specific things: ceramic faces, printed materials, books, Menko Cards, Japanese comics, etc.

Gathering those materials triggered Horfee’s devotion to art. He found immense joy in combining them and their particular details, as a way to establish emotions with contrasts and metamorphic shapes. A process was born: compiling subjects and techniques, established by practicing and testing them all first, all the while pushing things forward and creating new shapes and spaces, resulting in mixed media works.

Horfee collects all sorts of landscapes from digital 3D environments to intimate places he visits, and transcribes them into a collapsing point of view thrown on a single surface. He metaphorically presses ‘pause’ to stand still and let the mental image come together.

At the end of the 80ies, Horfee was thrilled by Japanese animation movies on French TV, staying stuck to the screen day and night - amazed by the backstage of it all, the slow process and meticulous assembly to provoke narration. In animation, celluloid is used for its transparent qualities and Horfee currently employs it in his work for the same reason, with his aim being: using crafty materials and see-through spaces to create propositions. “The fun needs to be as visible as it can be in rhythmic Hanna-Barberra cartoons,” he says.

The exhibition includes Horfee’s just-finished movie ‘Stubborn Horses’ (2019, 6 min). The animation is done in a traditional way: 24 images per second, all handmade to transmit the pleasure of creating on a digital screen: the artist wants to show a glimpse of “how it is built, how it is polished, and chosen by his human hands,” as he says. The whole content is a fusion of parameters that exist together and hope to affect people’s emotions. “The screen as a pole of diffusion is the new TV,” he says. “It doesn’t even need a content, just the screen as object, referring to Kubrick’s black stone in ‘2001: A Space Odyssey’.” The backgrounds, large brush strokes, diorama and characters loosely take up their role in the whole timeline. Without any doubt, this floating imaginarium is his net of collected captures.

Between the lines of ‘I’m the Glue’, references to the imagery of a carrousel reveal themselves. As Horfee thinks: “How could an artist exist efficiently without skills he learned? The only science is made of failure and pugnacity.” His mission this time? Choosing folkloric sources which combine public spaces and bootleg versions of popular figures. By using the aerosol as his tool, however, he makes them obviously recognizable. Certainly visible too, is his wish to intercept the rebound between the pleasure of painting decorative childhood materials, and the delight of despising it by painting it over. He strikes a balance between worship and brutal desire of acting, and defacing as a sacred gesture.

For Horfee, the act remains the most powerful mastery of all kind, leaving clues on every layer, disclosing a layered architecture. The attempt of this exhibition could lead to a definitive path “from craft to amusement”, or: when the act of furnishing efforts, piece by piece devoted to a whole identity realm, can lead to entertainment for us all.
A window to a familiar joy, an extended hand that takes the spectators to enter the cinematic, attracting a large smile when tickling their memory.