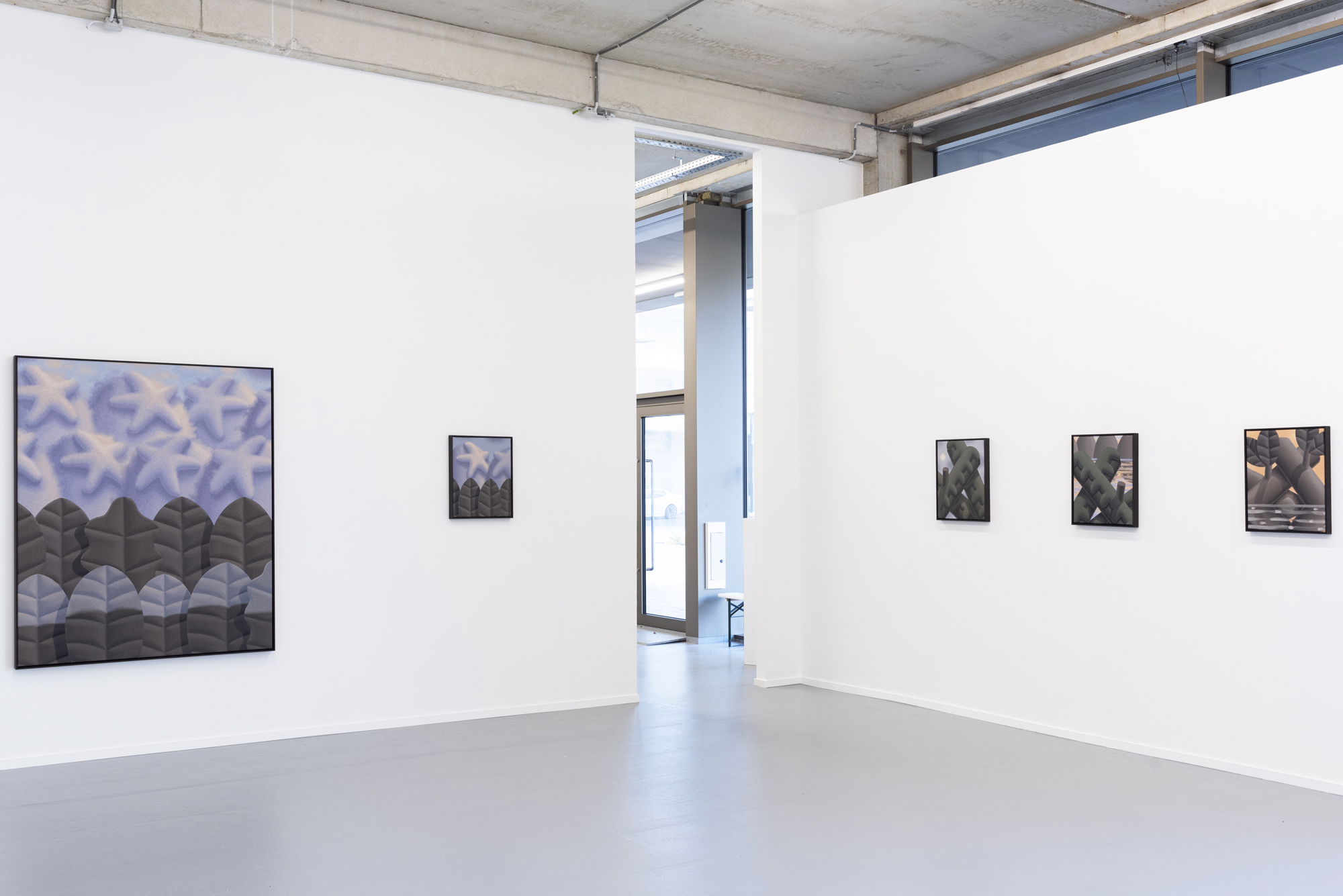 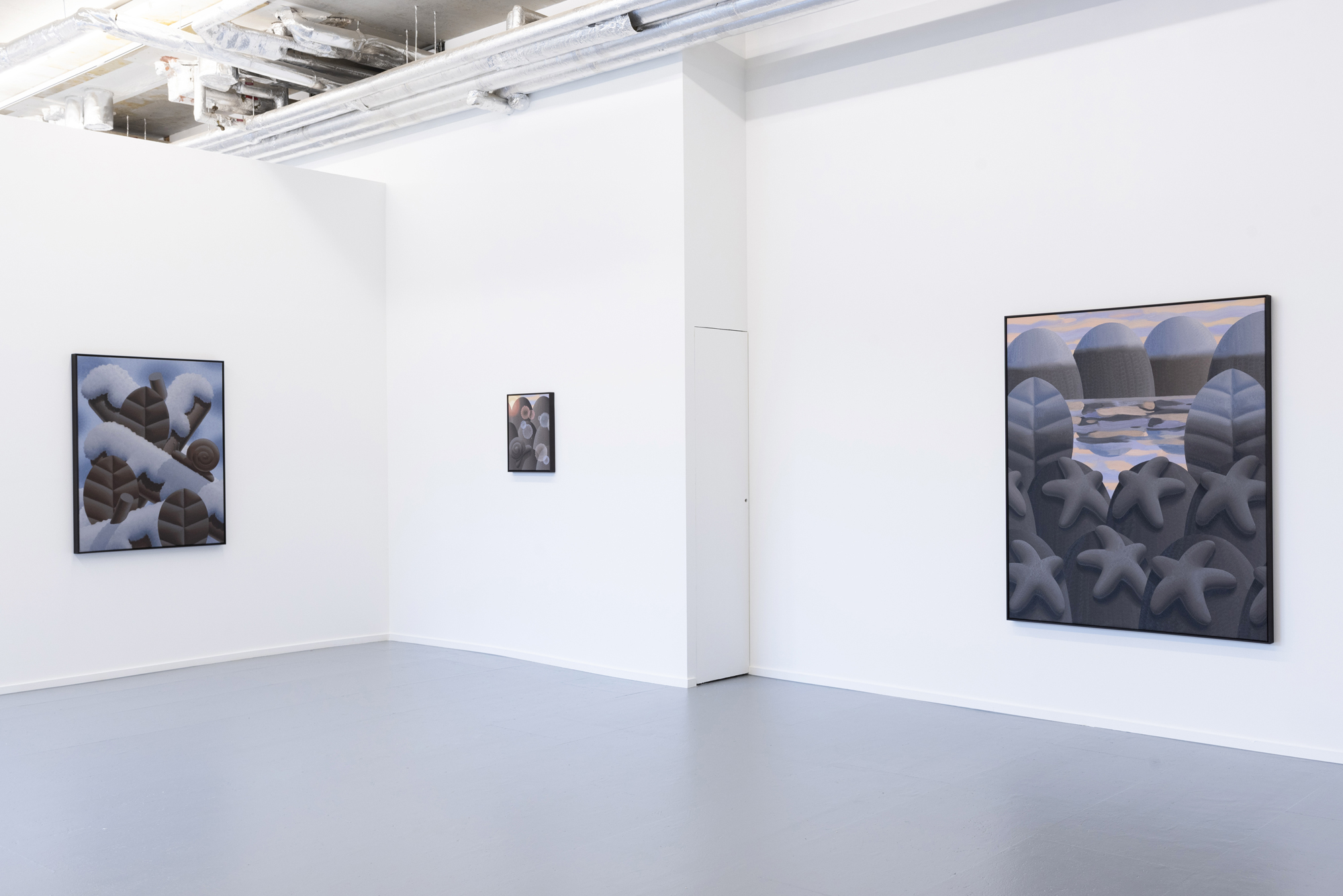 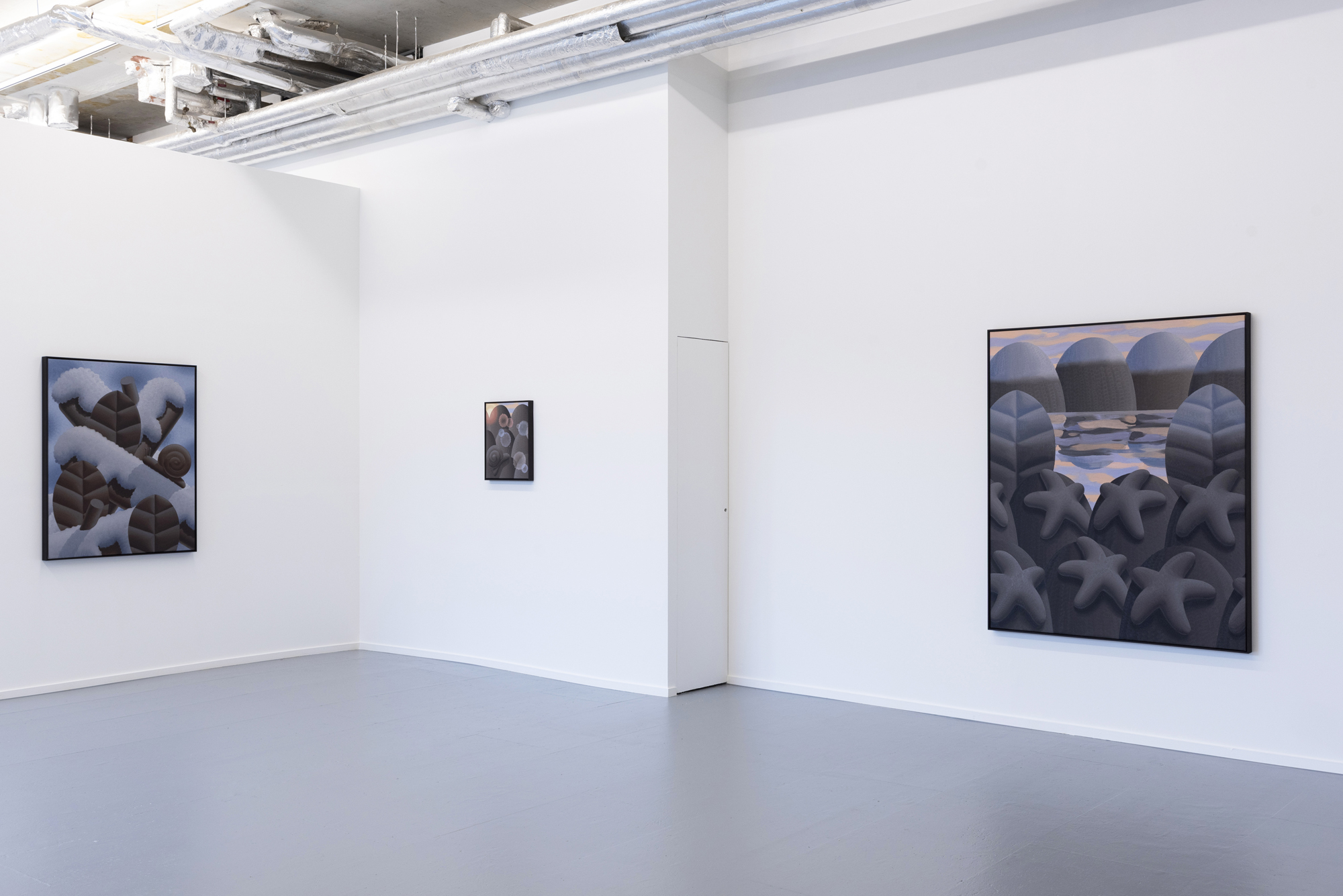 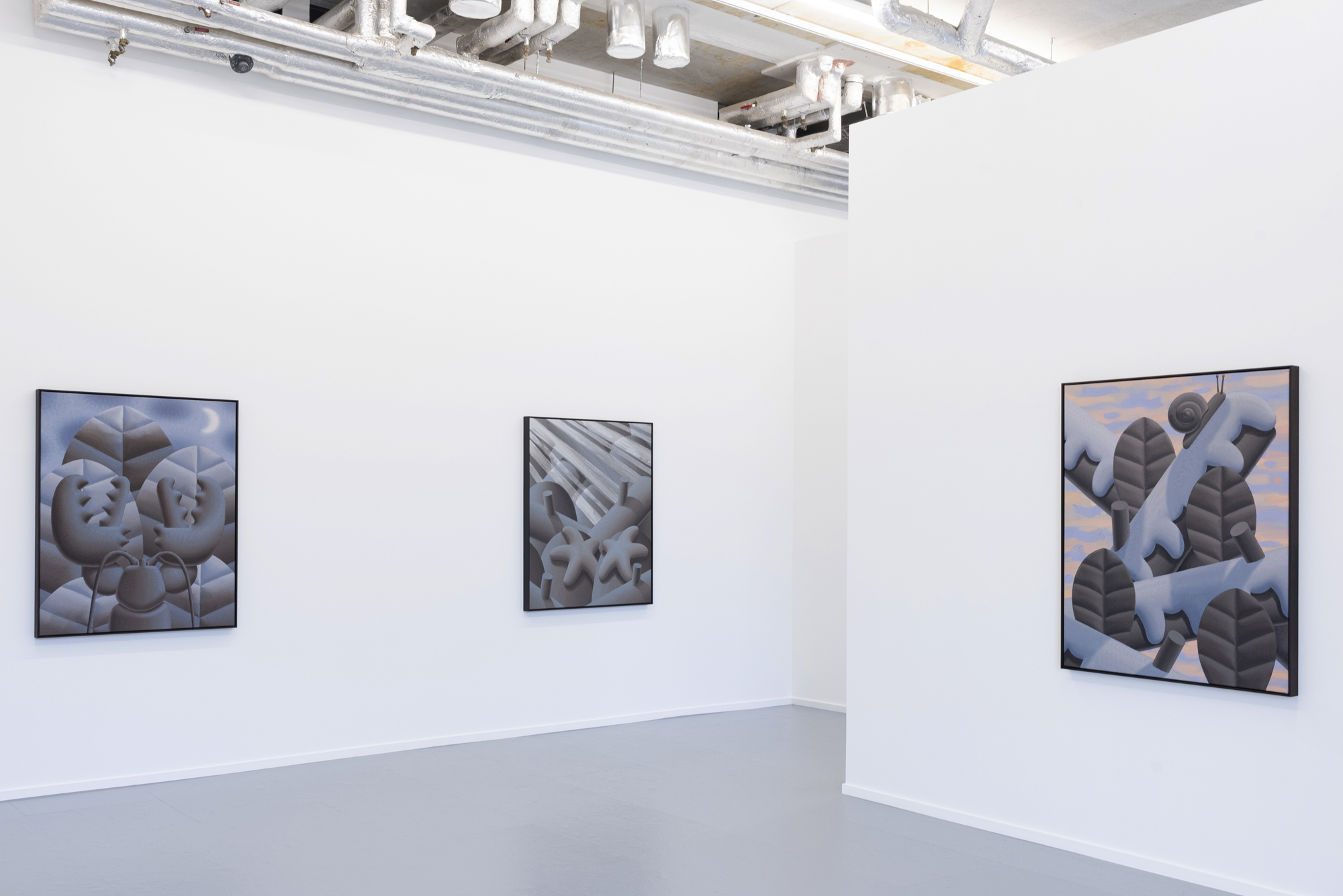 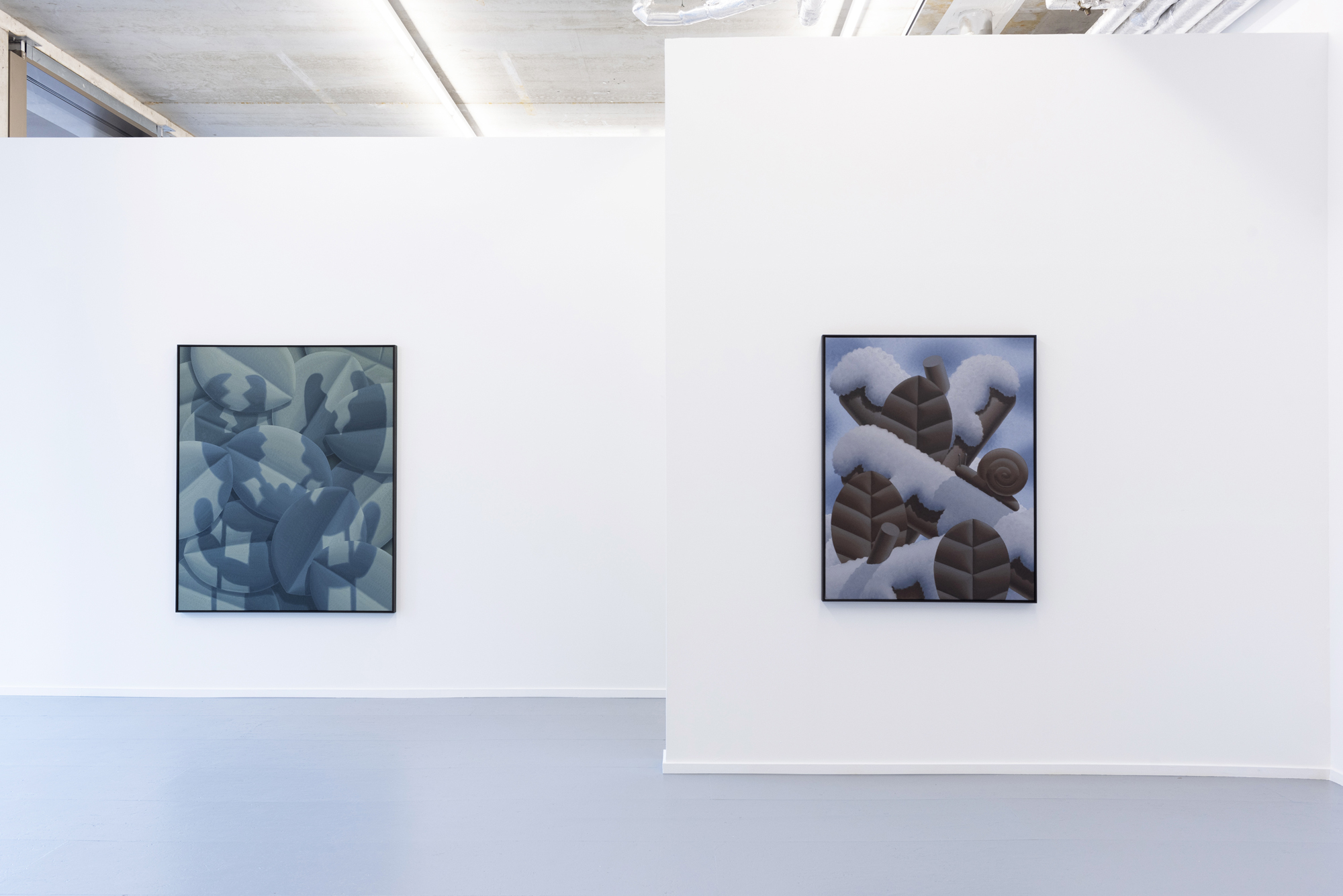 Considering his young age, artist Laurens Legiers (1994) has a very recognizable style. His work is clearly legible, his painting technique, even. He uses soft, rounded visuals and modest colours, focusing on the entire motif rather than on minute details. This keeps the surface tempered, mild. As a viewer you can dive in: there are hardly any obstacles, let alone any ego of the artist, present in his harmoniously accommodating images.

Legiers himself declares that he takes inspiration from the romantic landscapes of 19th-century artists such as Caspar David Friedrich: the storms, the wild sea, the dark foreground with a radiant sunlight in the background. However, the sublime dynamics and natural power that the romantics explored cannot literally be found in his work. There is no turmoil. All works, without exception, are characterized by a comfortable symmetry, a harmonious composition and smooth colours. One shade often determines the entire painting; a grey haze seems to hang over some works, as if our view has been darkened by rainy and cloudy weather. Other recent paintings, however, bathe in a warm light; a ray of sunshine after a storm, or a sun rising behind snowy mountaintops. A more romantic image hardly exists.

With the painting of snow, it is the first time that the artist uses larger brushes and a slightly more expressive dabbing technique. Snow, after all, should look fluffy. However, he remains true to the abstract, comb-like yet rounded shape he has appointed to ‘snow’. Within his own visual language, he chooses to represent themes or objects in his very individual way, and they gradually become trusty constants throughout his entire oeuvre. By now, we know and recognize his egg-shaped mountains, his happy-looking lobsters, his starfish, his snails, and his leaves (which, depending on context, might bear similarity to mountains).

In the past, Legiers’ work evolved from featuring landscapes and narratives to being increasingly formal, symmetrical, harmonious. It is not about a complex plot, but about a clear, comfortable composition. Always painting from memory, he does not lose himself in a multitude of details. By abstraction, he brings his subjects to an essence, which is sufficiently symbolic, yet always agreeably peaceful to look at. In his own words, he wants to “create an atmosphere, convey a pleasant feeling; like the soft joy you can experience watching a beautiful sunset.”

Could his painting style be experienced as naïve then – because of his innocent wish to evoke a beautiful feeling, or because of the simplicity and pleasantness in his brushstrokes? Even if this is so, there is absolutely no unhandy or unskilful quality to it. He works off the cuff, and therefore very controlled. Incidentally, this virtuosity is something he deliberately practices: by often painting the same subject, he tries to perfect the depiction of it – albeit within his own visual language.

The light of the sun, its effects in colour and the way we perceive it are at the core of this new series of works. In his evoking of different seasons and weather, Legiers mainly – and now more than ever – studies the play of shadow and light. The grey of a rainy Belgian autumn day, the magical shades of yellow and orange in a sunrise or sunset. For instance, he is fascinated by the beauty of snow changing colour depending on the light. Shadow on snow, on the other hand isn’t grey or black, but rather blue. When painting sunlight, he is also struck by the way it can affect our view: when trying to take a photograph of the sun, the light will often leave ‘stains’ on the image – these little imperfections seem to be the only way through which we can capture the absolute beauty of a ray of sunshine. They affect the way we view the landscape, but are also a sign of natural beauty. On a structural-compositional level, they are abstract shapes, giving the image an overall more surreal vibe. For Legiers, they are the perfect essence of the theme and ambiance he wishes to convey.

This new series, with larger and smaller works, should be considered as a whole. Some of his canvasses are larger than ever, and in their dialogue with the smaller ones, there is a subtle shift in perception, for the viewer, but also for him as an artist. His use of perspective is quite individual: there isn’t really a foreground or a background in the groups of shapes; the depth perception is created almost purely by a subtle play of shadows. Although usually working on a vertical format, he often evokes some type of landscape: a lake surrounded by mountains, wood floating through water, or snow lying on top of mountains. The larger and smaller images might function as each other’s reprise; revisiting the same subject, but from a further or closer distance. Not only does this interaction tell us something about perspectives, it also very subtly questions the framing of paintings, and images created by people in general.

In his striking and sometimes quirky combinations of formal elements and objects (do the starfish sit on eggs or mountaintops? Are the snails traveling around snowy leaves in a river? All readings are equally unlikely and intriguing), Legiers is an heir to (Belgian) surrealism. However humorous and mysterious, his modest, aesthetical and soft compositions never pose any kind of threat or discomfort. Seemingly without effort, and without any pretention, he creates a unique visual language which appeals, excites, intrigues, and above all strives for an accommodative and pleasant atmosphere in the exhibition space.

This text is partly based on a previous essay entitled The Soft Beauty of the Rain (July 2021).